Bitcoin (BTC) broke through the $8,000 price point this morning, as some alts are seeing a modest recovery for the first time in recent days.

July 24: Bitcoin (BTC) broke through the $8,000 price point this morning, as the top cryptocurrency continues to outperform most other crypto assets, according to data from Coin360.

In the days following the strong upswing that kicked off across the crypto market on July 16 and accelerated further on July 17, Bitcoin has sustained positive momentum while other alts slid into negative territory. 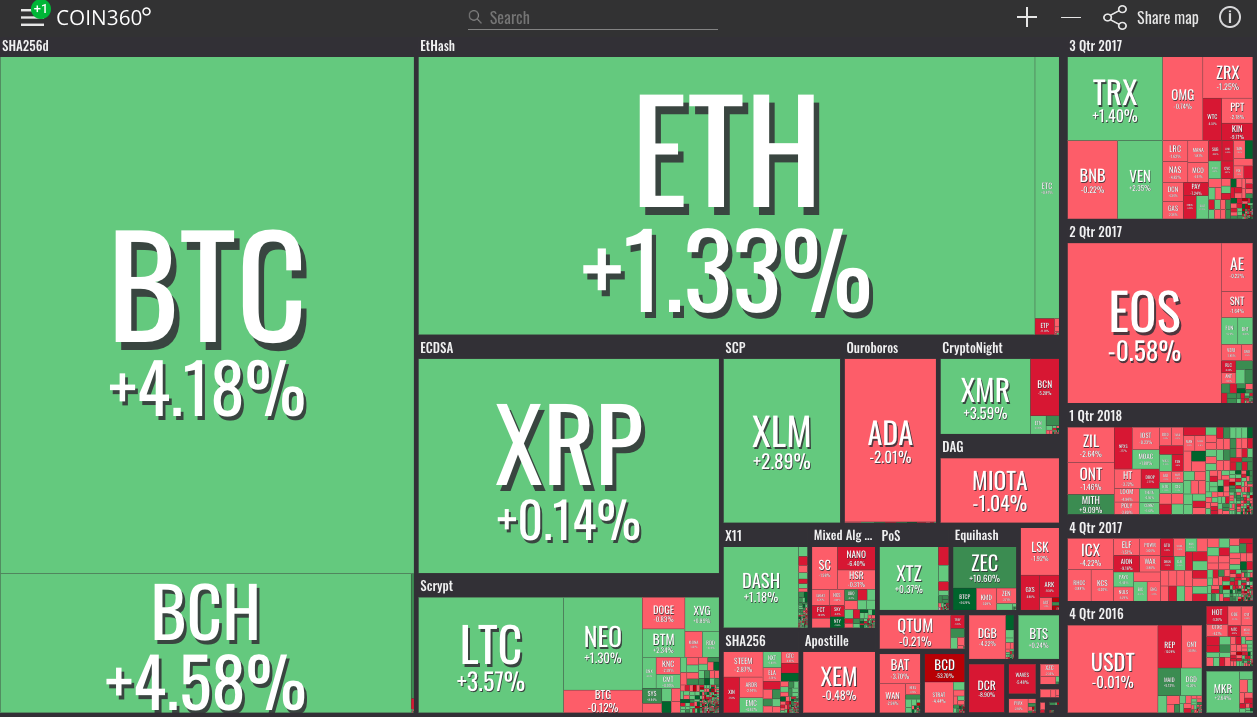 Bitcoin’s weekly and monthly gains are now at around 3.8 and 34 percent respectively, according to data from CoinMarketCap. 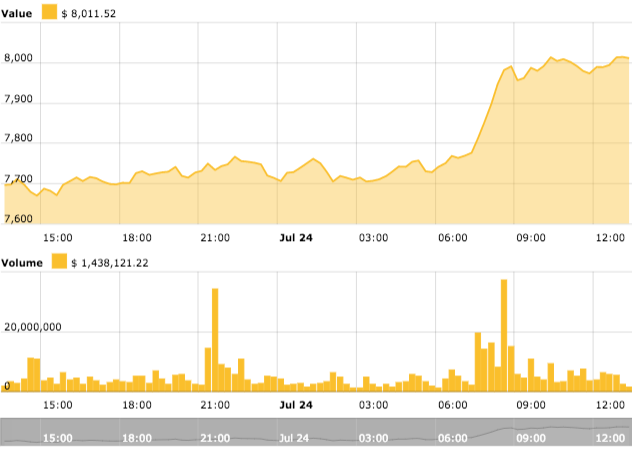 Yesterday, BTC dominance by market capitalization in the crypto market reached its highest level yet in 2018, passing 46 percent, a threshold last seen December 20, 2017, when the coin was trading close to its industry highs of $20,000. Today, dominance has inched up yet further to 46.8 percent by press time. 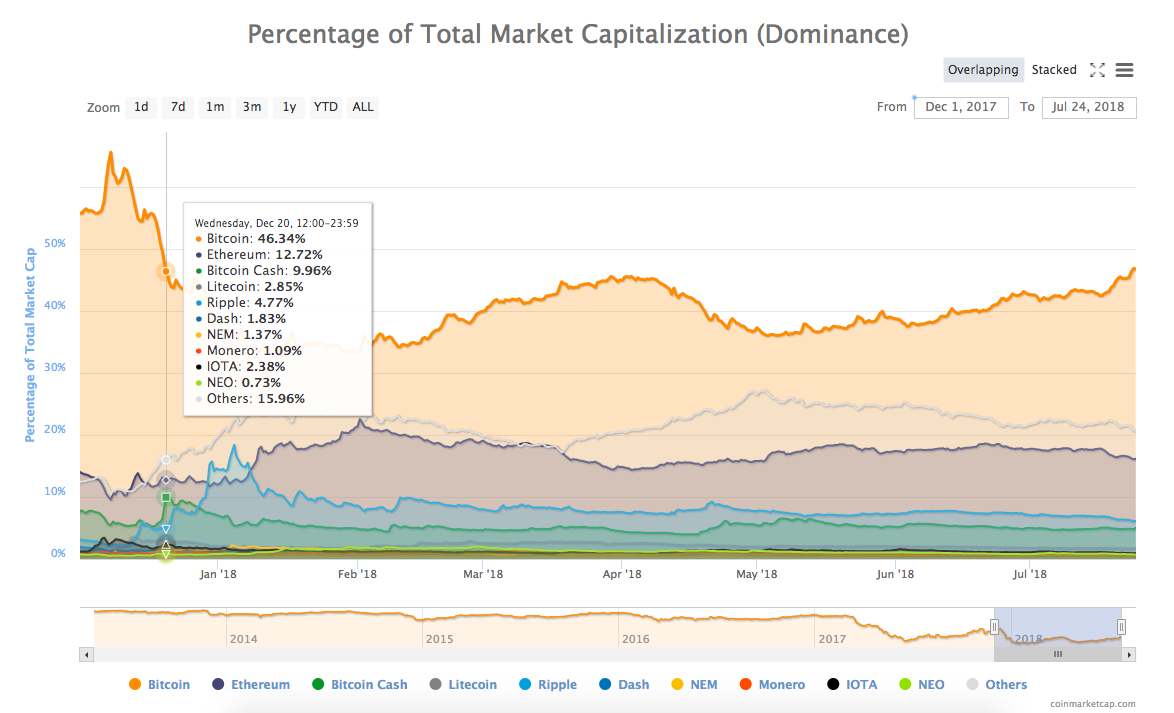 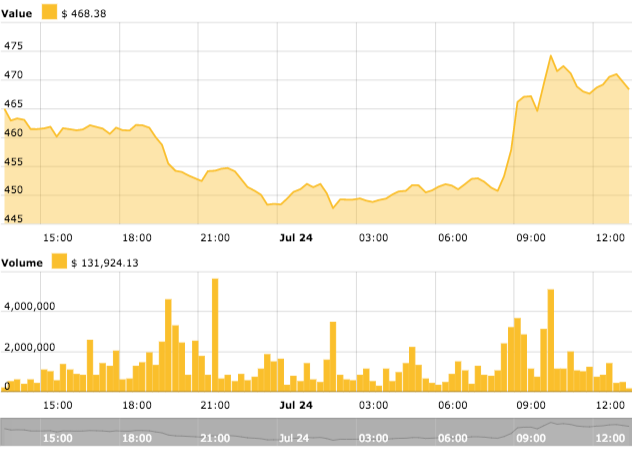 On CoinMarketCap’s listings, the top 10 coins by market cap are seeing mixed red and green, with some alts seeing solid growth of above 4 percent.

Litecoin (LTC) is up over 3.5 percent on the day, trading at around $87, according to CoinMarketCap. Bitcoin Cash (BCH) is also up over 4.5 percent and is trading at $851 to press time.

Meanwhile, EOS, IOTA (MIOTA), and Cardano (ADA) are all down, seeing losses of within a 1-2 percent range on the day by press time.

Of the top 20 ranked coins on CoinMarketCap, anonymity-oriented altcoin Monero (XMR) is the strongest performer. Monero is up almost 4 percent and is trading around $140 at press time. Breaking $148 July 18, the coin saw a subsequent decline to $127 on July 21, and traded sideways until yesterday’s uptick, which continues today. 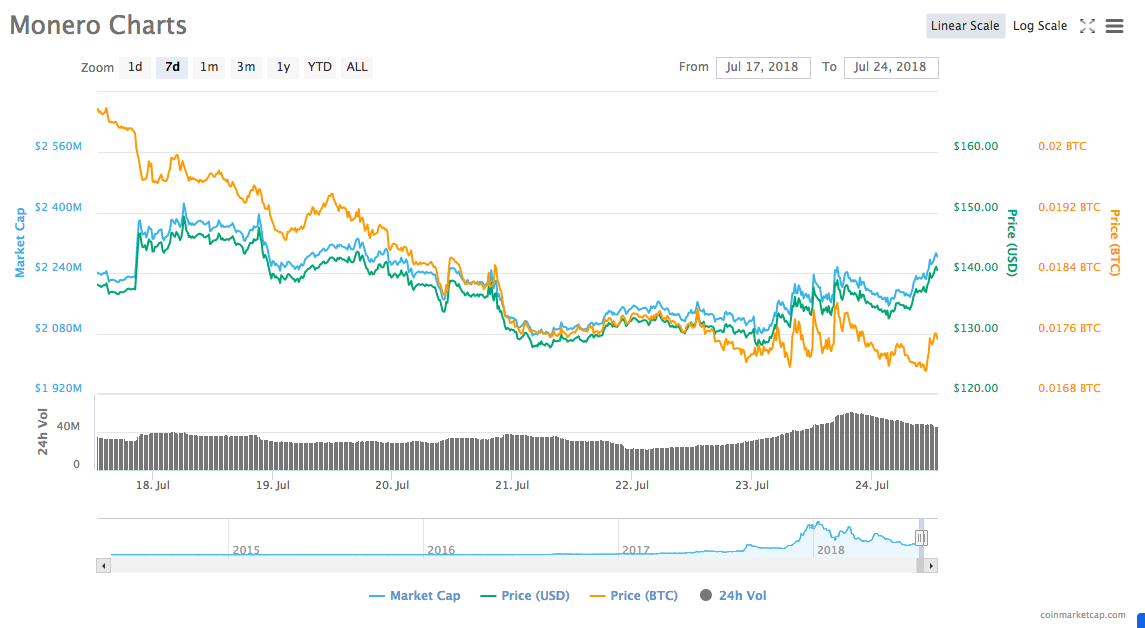 Total market capitalization of all cryptocurrencies is around $294 billion at press time, inching closer to its intra-weekly high of around $300 billion. 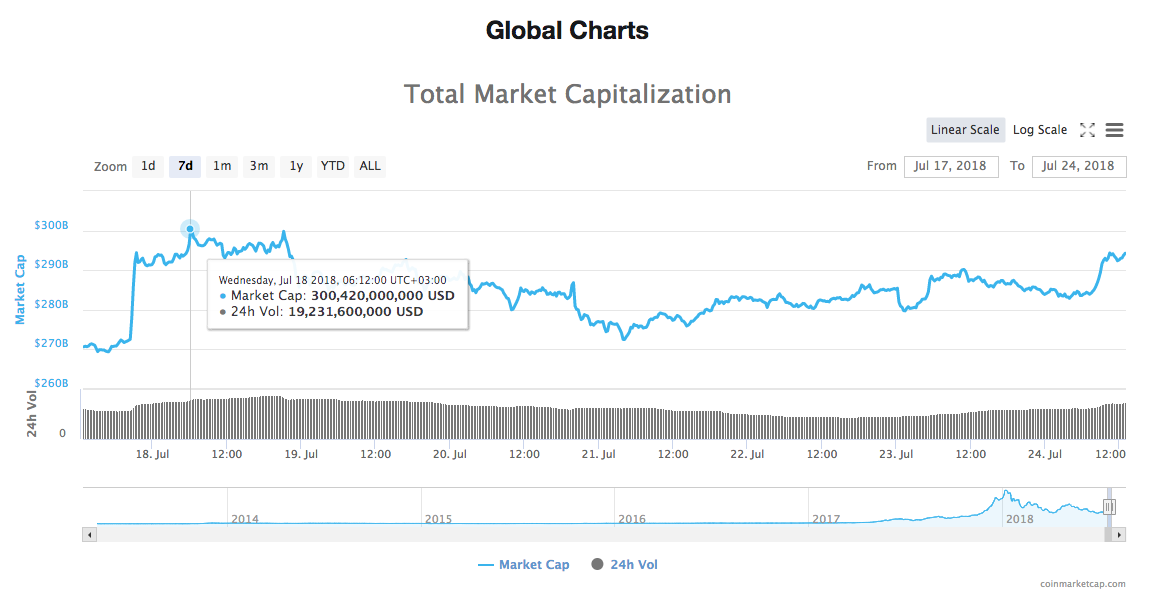 While the market is seeing a more mixed picture today, Bitcoin’s recent divergence from other crypto assets has prompted CNBC trading advisor Ran NeuNer to venture that we may be on the cusp of a bull market. The analyst attributes the top coin’s strong performance to news earlier this month that the $6.3 trillion asset manager and ETF-giant BlackRock is beginning to assess potential involvement in Bitcoin. As per NeuNer’s scenario:

“-BTC goes up in anticipation of ETF at the expense of Alts.
- Investors start to pay more attention to BTC as it is getting returns.
- New money flows in again including institutional funds.
- BTC runs , investors exit and invest in Alts.
- Bull market again…”

While many hold the view that crypto-based ETFs would be a “holy grail” for the crypto industry, news that BlackRock may also be eyeing an entry into Bitcoin futures trading could prove more divisive, given suggestions from figures including Fundstrat’s Tom Lee that  Bitcoin’s “gut wrenching” price weakness this spring was tied to futures contract expirations.

In May, the Federal Reserve Bank of San Francisco had similarly alleged that Bitcoin’s price decline was the result of the introduction of futures trading on CBOE, and then CME, in Dec. 2017.

This week, CME revealed that the average daily volume of Bitcoin futures on its platform increased by 93 percent in Q2 over Q1 in 2018, also indicating that the number of open contracts had exceeded 2,400 — a 58 percent increase over Q1.