Crypto markets are largely continuing to build on a major upswing that kicked off yesterday, with virtually all of the top ten coins by market cap in the green.

July 17: Crypto markets are largely continuing to build on a major upswing that kicked off yesterday, July 16, according to Coin360 data, with virtually all of the top ten coins by market cap in the green. 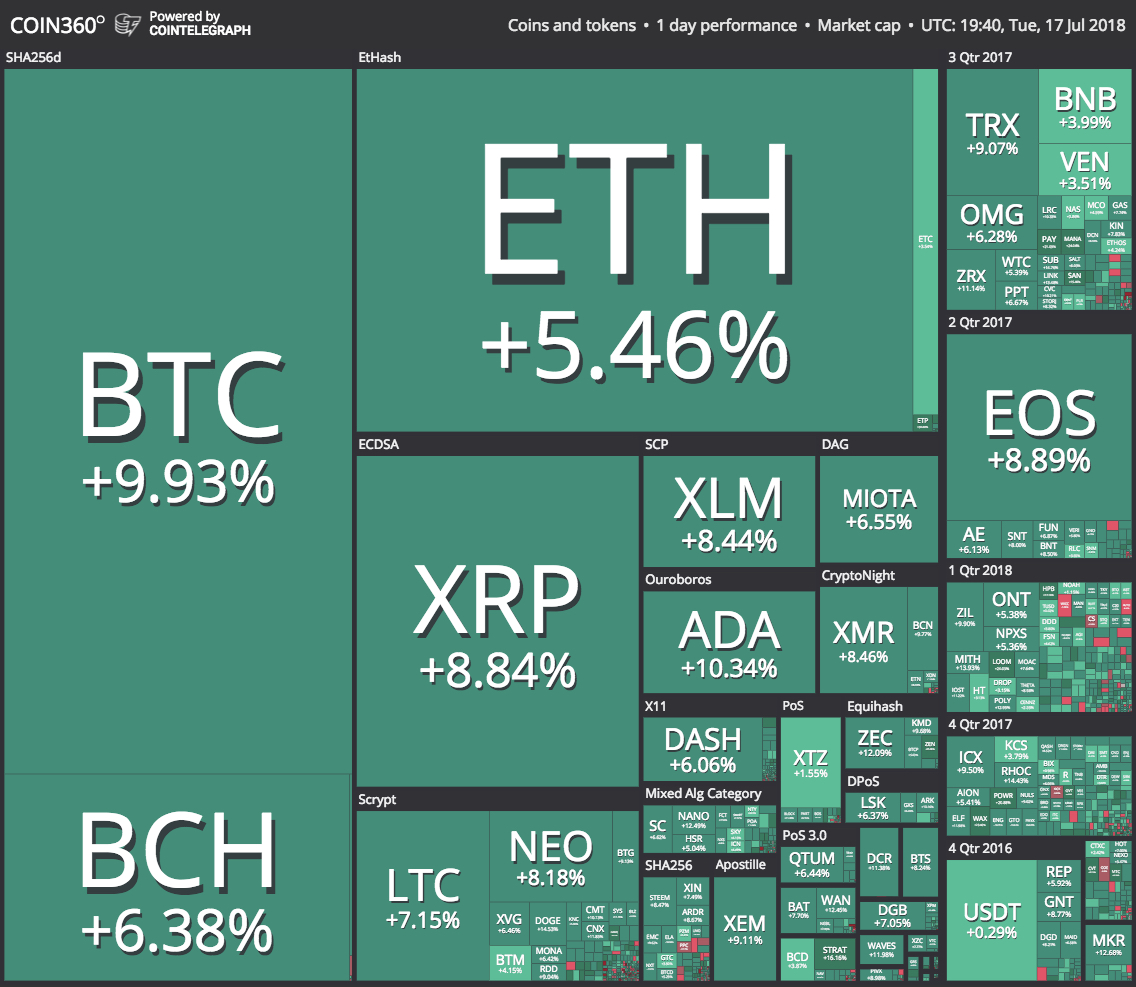 Ongoing positive momentum now looks set to reverse the major valuation losses incurred last week, which could now prove to have been a temporary dip rather than a lasting downtrend.

Bitcoin (BTC) is trading around $7,209, up a little over 8 percent over the 24-hour period to press time. The leading cryptocurrency has today pushed further beyond yesterday’s peak trading price of $6,679, with the day’s upwards spike continuing at press time.

Bitcoin has now brought its weekly and monthly gains into net positive territory, which are at around 6 and 2 percent respectively. The coin has now outstripped its outstanding rally on July 8 when the coin hit almost $6,800. 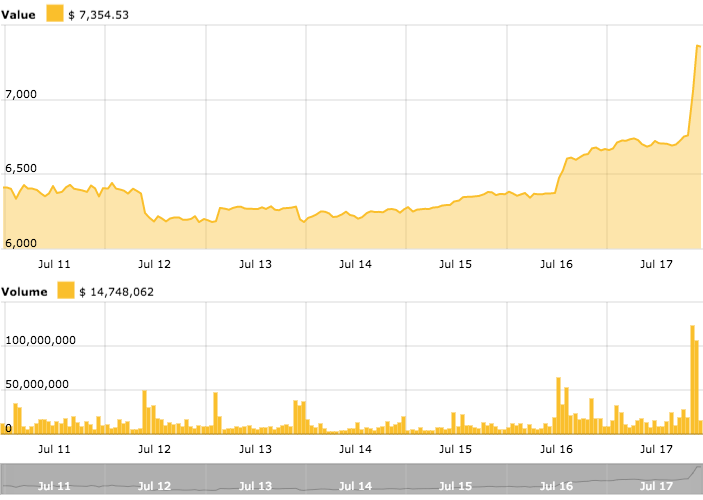 Top altcoin Ethereum (ETH) is trading around $494 to press time, up almost 4 percent over the past 24 hours to press time. While the coin’s strong growth yesterday has secured a positive weekly percentage gain of a strong 8 percent, Ethereum’s monthly performance is still almost 6 percent in the negative. 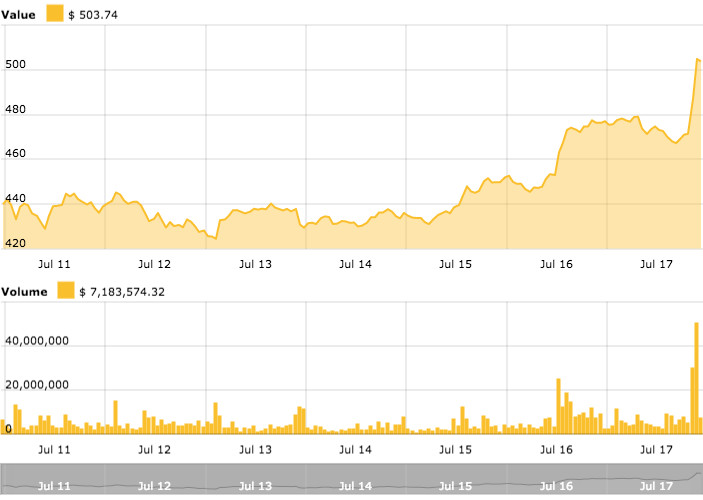 On CoinMarketCap’s listings, all of the top 10 coins by market cap are showing green over the past 24 hours to press time.

Anonymity-oriented altcoin Monero (XMR) is the strongest performer of the top twenty cryptocurrencies over the 24-hour period, up almost 9 percent and trading around $143 to press time. 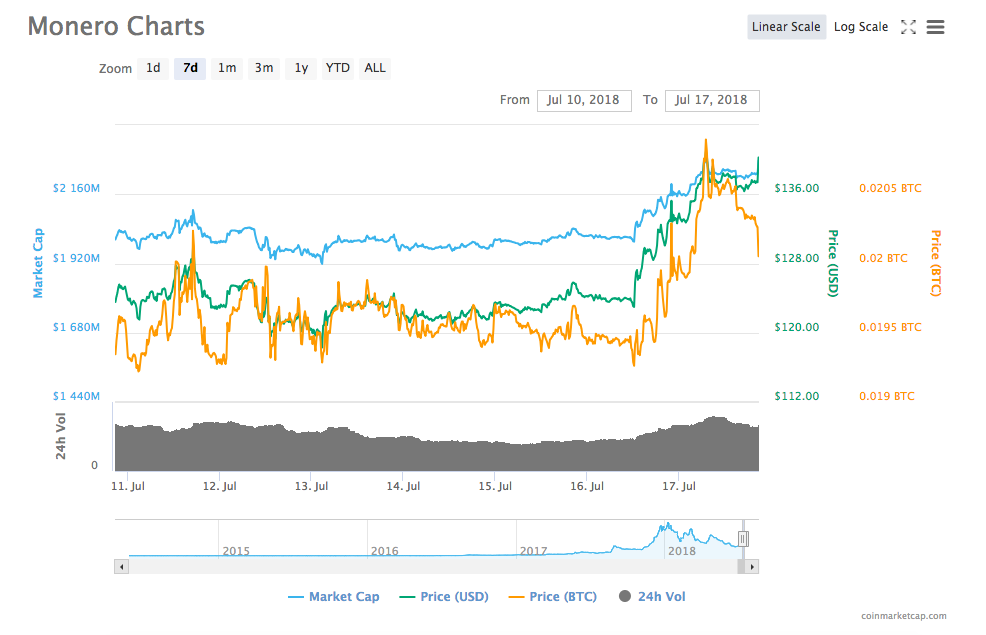 Ripple (XRP)’s 24-hour performance has been closely correlated with Bitcoin’s, seeing an approximately 6 percent growth and trading around $0.50 to press time, according to CoinMarketCap.

Total market capitalization of all cryptocurrencies is now at around $286 billion to press time. 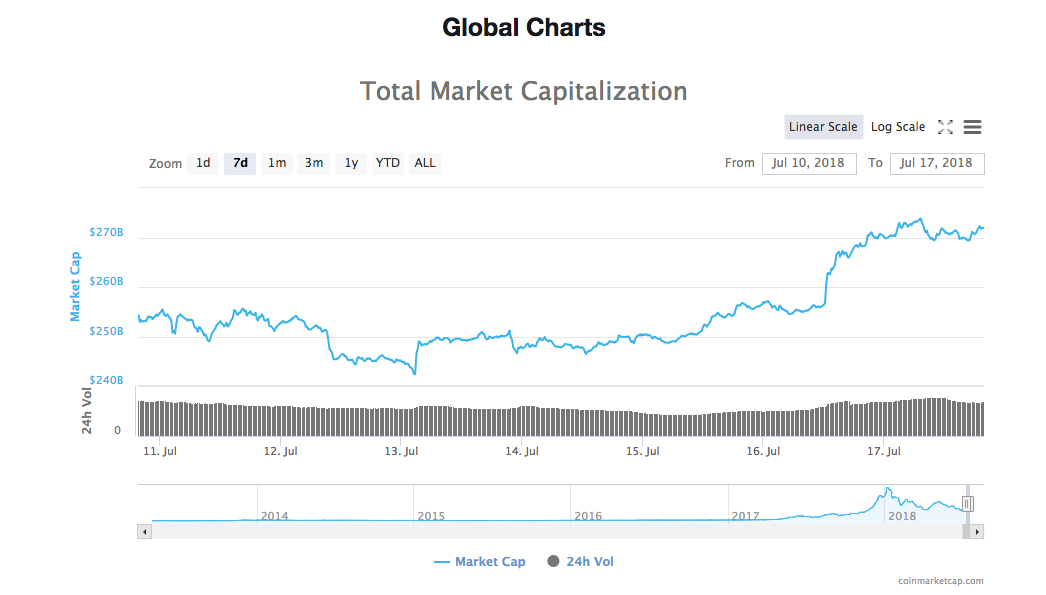 CNBC trading advisor Ran Neu-Ner has today drawn attention to the news that the world-renowned Chartered Financial Analyst (CFA) examination is adding cryptocurrency and blockchain topics to its curriculum, a move that is poised to bring widespread knowledge of crypto to the financial mainstream.

Positive news has continued to flood in today, with Japanese internet giant SBI Holdings formally launching the public version of its crypto exchange VCTRADE today, a triumph in the context of increasingly stringent regulatory demands for tightened security among the country’s operators.

Major U.S. crypto exchange and wallet service provider Coinbase has meanwhile just received the all-clear from the country’s regulators to list specific digital assets that are considered to be securities — representing significant progress in its bid to operate as an officially regulated crypto broker dealer.

Also today, a new project for a U.S. dollar-pegged stablecoin that runs on the Stellar blockchain network received backing from tech giant IBM, which has reportedly already begun testing the asset.

Aviation giant Boeing has for its part announced that it will be partnering with an artificial intelligence (AI) firm to develop pilotless vehicles and other products using blockchain.