Bitcoin Worth Over $7,400 Again as US Stock Market Sees Moderate Downturn

Most of the top 20 cryptocurrencies are reporting moderate gains on the day as bitcoin crossed the $7,400 mark.

Monday, May 13 — most of the top 20 cryptocurrencies are reporting moderate gains on the day by press time, as bitcoin (BTC) has crossed the $7,400 mark. 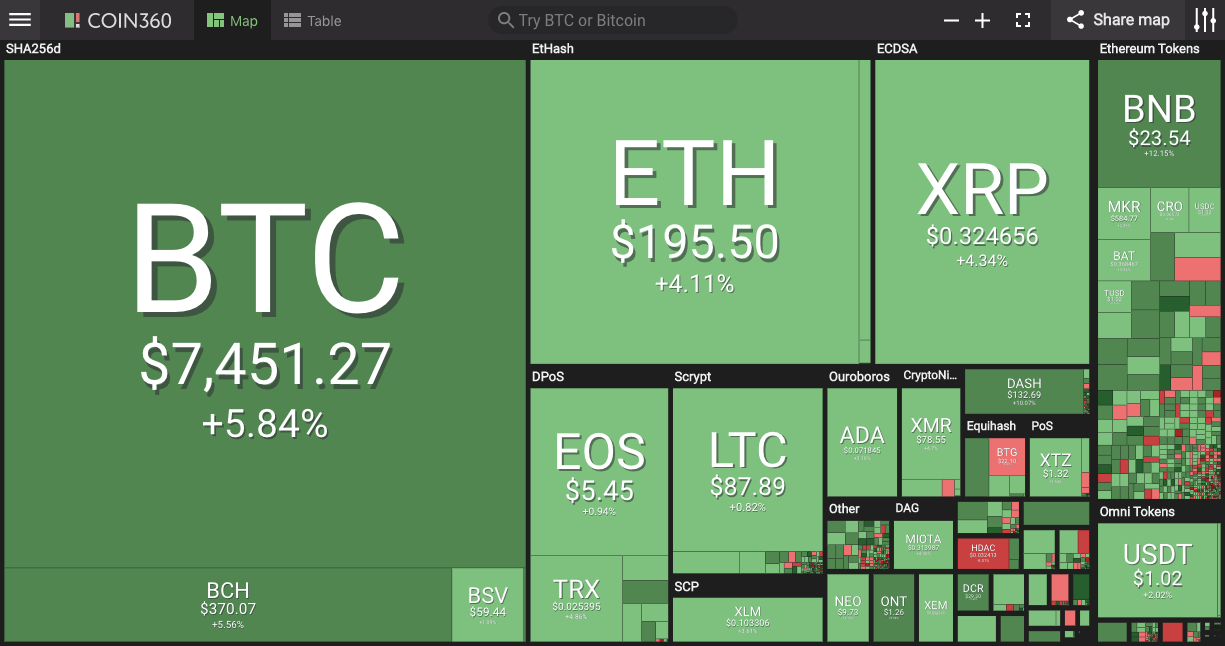 Bitcoin is up over 5.2% on the day, trading at $7,431 at press time, according to CoinMarketCap. Looking at its weekly chart, the coin is up over more than 22%.

Ether (ETH) is holding onto its position as the largest altcoin by market cap, which currently stands at $20.5 billion. The second-largest altcoin, XRP, has a market cap of $13.5 billion at press time.

CoinMarketCap data shows that ETH is up over 2% over the last 24 hours. At press time, ETH is trading around $193. On the week, the coin has also seen its value increase by over 15%.

Ethereum co-founder Joseph Lubin said that the Ethereum blockchain will become about 1,000 times more scalable in 18 to 24 months during a recent interview with Cointelegraph.

Among the top 20 cryptocurrencies, the ones reporting the most notable gains are binance coin (BNB) and dash, both up about 11%.

At press time, the total market capitalization of all cryptocurrencies is $220.5 billion, nearly 18% higher than the value it reported a week ago.

In traditional markets, the United States stock market is seeing a moderate downturn so far today, with the S&P 500 down 2.3% and the Nasdaq down 2.96% at press time. The CBOE Volatility Index (VIX), on the other hand, has gained a solid 30.61% on the day at press time.

Major oil futures and indexes are seeing mixed movements today, with WTI Crude up 2.08%, Brent Crude up 2.25% and Mars US down 0.13% at press time. The OPEC Basket is also down 0.31% and the Canadian Crude Index has gained 2.89% by press time, according to OilPrices.