BitMEX, the world’s third largest crypto exchange, has continued to lose its market share to Binance exchange after the Black Thursday crash.

BitMEX, one of the world’s biggest crypto derivatives exchanges, is still struggling to recover from a major market sell-off that followed the Black Thursday crash in March.

According to an April 21 report by crypto analytics firm Coin Metrics, BitMEX has continued losing in both open interest and volume for Bitcoin (BTC) futures since last month’s historic market crash.

At the same time, Binance’s Bitcoin futures trading arm, Binance Futures, has been increasingly gaining momentum, the report said. This data comes from Coin Metrics’ 47th “State of the Network” report, devoted to understanding the impact of the Black Thursday on crypto markets.

According to Coin Metrics, Binance Futures has emerged as the biggest winner of the futures market since the Black Thursday, and data from Skew on April 21 confirms it. As of press time, Binance is reporting $2.8 billion in 24-hour Bitcoin futures volumes, against BitMEX’s $2.1 billion and Huobi’s $2.46 billion. 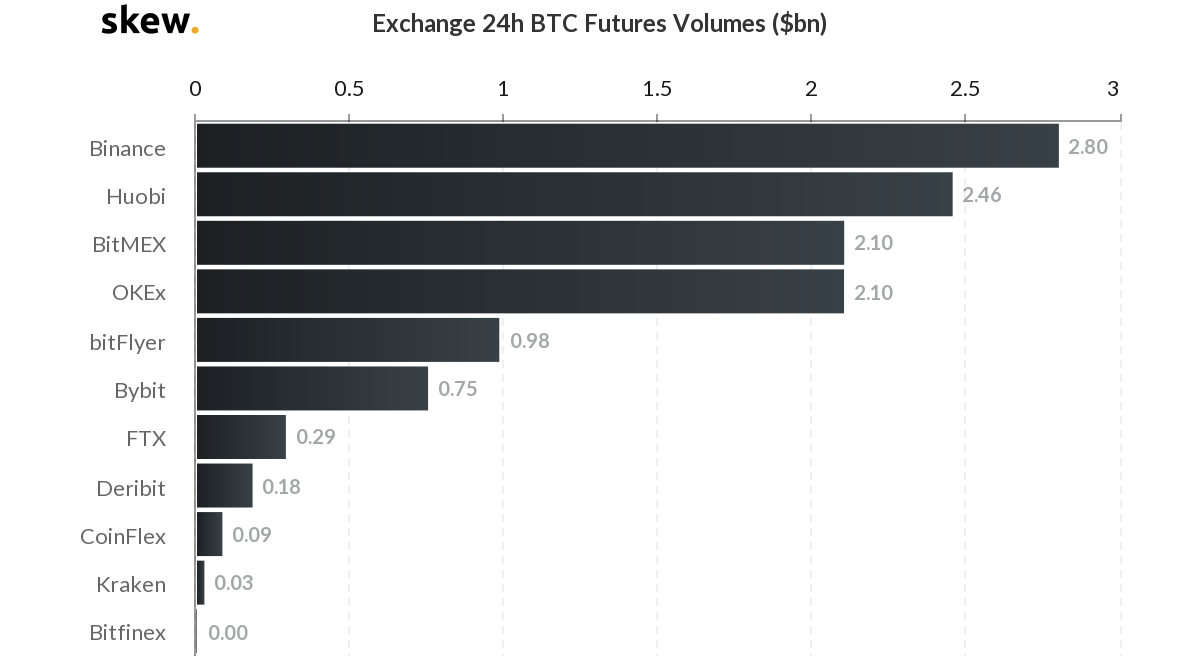 BitMEX’s futures market share of open interest dropped from above 35% in mid-March to nearly 25% in mid-April, according to Coin Metrics data. BitMEX’s volume share tumbled from about 25% to below 20% during the same period. Despite both open interest and volume share a small recovery attempt by March 30, the numbers continued to see some decline in April. 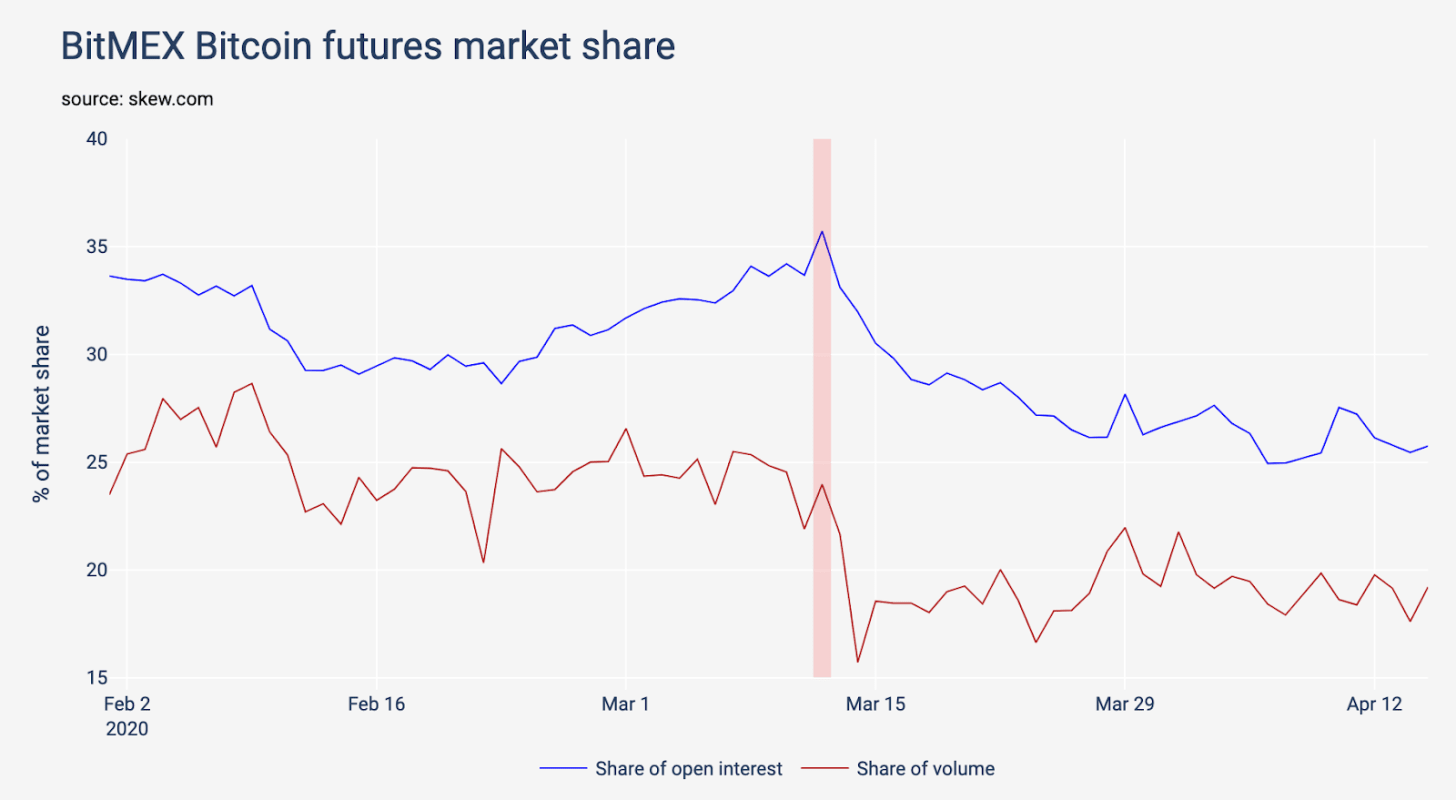 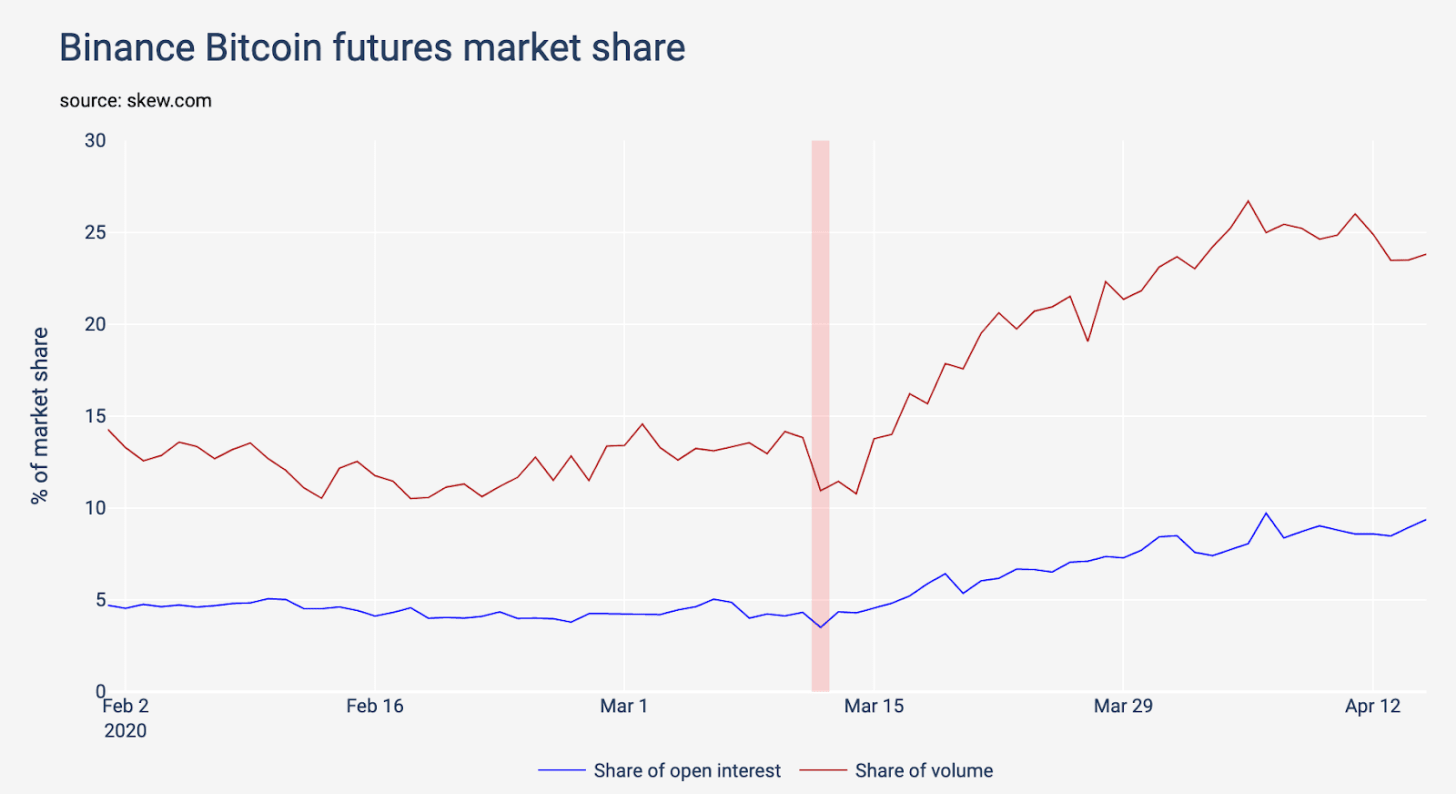 As reported by Cointelgraph, BitMEX experienced a massive drop in Bitcoin deposits after the Black Thursday crash on March 12. BitMEX saw nearly a 40% decline in Bitcoin holdings on its platform over a period from March 13 to April 9.

BitMEX’s market share decline was apparently impacted by the existing controversies surrounding two DDoS attacks. As reported, BitMEX’s DDoS attacks caused about 30 minutes of downtime and purportedly triggered Bitcoin to drop to as low as $3,600 on March 13. Eventually some industry players suggested that BitMEX was responsible for Bitcoin hitting multi-month lows in March, while BitMEX subsequently denied the allegations, calling it “conspiracy theory.”

Both BitMEX and Binance are among seven crypto firms targeted by 11 lawsuits filed in a New York federal court on April 3. In addition to the alleged violation of securities laws, BitMEX is also accused of price manipulation.