Denver Municipal Election: Another Small Stop on the Road to Universal Blockchain Voting

Despite widespread suspicion of the technology’s ability to underpin secure elections, some U.S. jurisdictions are pushing ahead with limited blockchain-enabled voting trials.

2267 Total views
143 Total shares
Listen to article
0:00
Follow up
Own this piece of history

On March 7, news broke that Denver is slated to become the second United States jurisdiction to pilot a blockchain-powered mobile voting platform in its upcoming municipal election. Absentee voting will start on March 23 and will run until the Election Day, May 7. The announcement came almost exactly one year after the first initiative of this kind — deployment of mobile voting solution in West Virginia primaries and then midterm elections — was made public in March 2018.

Once again, it was the Tusk Philanthropy foundation that spearheaded the effort, while Boston-based technology company Voatz took care of the software side of it. This time around, the partnership also included the National Cybersecurity Center, a nonprofit that works to raise awareness of cyber threats to the integrity of election systems.

Whereas in West Virginia elections last year just about 150 people opted in to cast ballots via their mobile devices, the Denver campaign in May could see a much wider utilization of the technology. The target voting population is both service members and overseas citizen voters from the city and county of Denver, totaling around 4,000 people.

As the idea of using distributed ledger technology to record the expression of citizens’ electoral preference is still met with near-universal suspicion, this trial might become the largest blockchain-facilitated campaign to fill political offices in the United States to date. 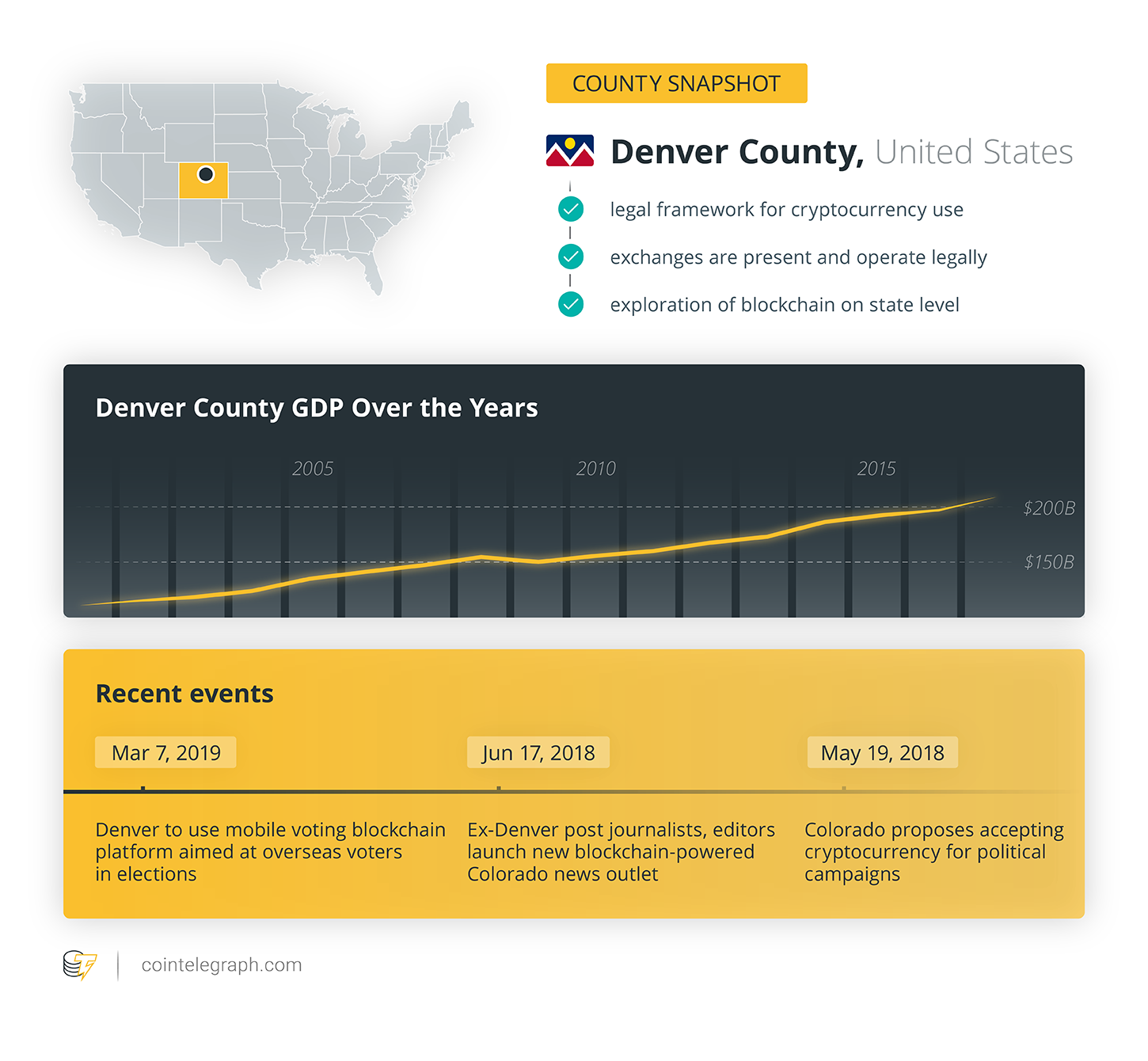 Tusk Philanthropies is on a mission to fix American democracy by means of dramatically increasing voter turnout — which should, in turn, improve the quality of political representation. They believe in mobile voting as a shortcut to more inclusive elections. Blockchain technology is an integral part of the organization’s strategy, due to the security and auditability that it brings to the process. At the same time, Sheila Nix, president of Tusk Philanthropies, made it clear in an email to Cointelegraph that the organization views the technology as an instrument rather than an end goal, and it remains open to an alternative solution, should it prove more useful:

“Blockchain is the most secure option that exists right now but we are vendor and technology agnostic and are open to new solution in the future. We think there is a lot of growth potential for blockchain-based voting — especially due to the auditability features.”

Always on the outlook of expanding their ambitious mobile voting program, the Tusk Philanthropies leadership began talking with the city of Denver and the National Cybersecurity Center last year. The foundation was attracted by the city’s “strong reputation in the area of elections” and saw the opportunity to move mobile voting ahead.

For Denver Elections Division, the two major selling points were convenience and security. Out of the two, security was paramount, so the city government engaged in a meticulous vetting process before giving the project a thumbs-up. As Jocelyn Bucaro, the unit’s deputy director of elections, recounted:

“We’ve been following the pilot in West Virginia very closely. We’ve conducted several demonstrations with Voatz and another vendor, and we ultimately decided, after talking with the West Virginia Secretary of State office, after Voatz went through a rigorous security review by our tech services team and after seeing the review conducted by Tusk Philanthropies of the security of the vendor, and after working with them to make improvements even over the West Virginia pilot last year to their application, we felt that it was appropriate for us to pilot this for our military and overseas citizen voters in municipal election cycle.”

Interestingly, the initiative took off without any involvement on behalf of the famously pro-blockchain Colorado Governor and former U.S. Representative Jared Polis, who hadn’t even announced his candidacy for governor at the time the project was conceived. Bucaro and her colleagues, however, sought some input from the Colorado Blockchain Council, whose several members were involved in the demonstrations.

Bucaro also pointed out that mobile voting in the Denver election is not meant to replace paper-based ballots. Rather, it will be used to facilitate the process for a specific group of absentee voters — those who serve in the military or live overseas — and who are currently using email to return their ballots to election administrators:

“Military and overseas voters fall under an overseas statute that requires us to email them a ballot, if they choose to receive their ballot by email. Colorado law also permits them to return their ballot electronically. So this voting population was already able to receive a ballot that they could mark on a hosted website, and then generally they would email the ballot back to us as a PDF attachment to an email — which is not a very secure method of return, which is why this method using blockchain secure encryption, a distributed ledger that can’t be changed, offers a higher degree of security and auditability than simply an email attachment.”

Eligible voters will be required to request an absentee ballot, install the Voatz application, and go through the biometric authentication process. Identity verification entails submitting a photograph of voter’s government-issued ID and a 10-second “selfie” video. Once this is out of the way, the app permits the user to cast their vote, which it records to a distributed ledger. This is where the convenience part comes in: Each stage of the procedure doesn’t require anything except a cell phone, in contrast to the trouble of printing out, filling out and scanning paper ballots before emailing them as a PDF attachment.

The initial response from Denver’s military and overseas voters was rather enthusiastic. In less than one day following the announcement, some 90 people signed up to vote via their phones in the upcoming municipal election cycle. This showing, as Jocelyn Bucaro notes, is a good reason to be optimistic:

“Generally speaking, our overseas voters tend to participate in municipal elections at much lower rate than in federal elections. They don’t live here, so they are not as connected to who’s on city council or who’s running for mayor, so these elections have a much lower turnout among that population. So we were pretty excited to see almost 90 people sign up in just the first day after we’ve sent this newsletter out.”

Despite the Denver pilot being a step forward in terms of expanding the potential number of voters involved, it still confines the use of the mobile platform to a very specific and narrow population. Given the pushback against the idea of using blockchain as a primary technological infrastructure in mainstream voting on behalf of the majority of influential election technology experts, it would be too bold to predict that the future of ubiquitous mobile voting is just around the corner.

As Cointelegraph reported last year, even West Virginia’s Secretary of State Mac Warner, who exuberantly reported on the success of the state’s trailblazing effort, made a point to emphasize that he will never advocate for using blockchain-powered voting solutions beyond overseas absentees.

To be clear, this time, it is not only about blockchain. For example, the authors of a recent report by the National Academy of Sciences on the future of elections contend that no internet-based modality could provide better security than paper-based voting — since at the current level of technological development, there is no way to completely rule out the threat of DDoS attacks and malware intrusion. With regard to blockchain, the report holds that this technology is not compatible with the inevitably centralized nature of elections, which is hard to dispute. There is a fundamental disagreement between the character of today’s institutional politics and the ideology of blockchain governance, so shifting to elections run on distributed ledgers will require not just instrumental, but ideological transformation.

Still, more practical issues persist: Cryptographers and election technologists remain unimpressed by the extant identity-management functionality of blockchain-based systems, as well as by the idea that a voter might lose their right for democratic representation for good once they lose their cryptographic key.

Neither of these seems to be a show-stopper for blockchain-enhanced elections advocates. The Tusk Philanthropies’ campaign to promote mobile voting is picking up steam, according to Sheila Nix:

“We have begun conversations with several other cities and states and expect to have additional pilots later this year and in 2020. We are especially excited to test the mobile voting technology for those with accessibility needs.”

Targeting special groups of voters that could benefit from technological developments the most seems to be the dominant strategy for the near future of blockchain and mobile voting. Jocelyn Bucaro also shares this vision:

“We think there is a lot of potential to offer with this type of voting technology, assuming this pilot is successful, to not only our military and overseas citizen voters but also to voters with disabilities who may not be able to vote via a mailed paper ballot at home without assistance. We’d love to be able to offer them a convenient way to vote independently and privately at home as well.”

Blockchain-friendly as Colorado is, there is also hope for statewide adoption, Jocelyn Bucaro admits:

“We have worked closely with the secretary of state office here in Colorado through our mock election period, and we’re engaging with them, and they are closely monitoring how the pilot goes. It would be a decision of the state, and possibly even the state legislature, whether or not to implement it on a statewide basis. We are certainly going to report out broadly how the pilot goes.”