After compromising verified accounts, scammers changed the profile name and picture in order to pose as the Tesla CEO. Scammers would then post in comment threads started by the real Elon Musk, so as to give the impression of legitimacy. Some of the scam tweets said that Elon Musk was conducting “the biggest” crypto-giveaway in the world for those who use “Bitcoic” (read Bitcoin), and provided a link to “participate” in the giveaway. 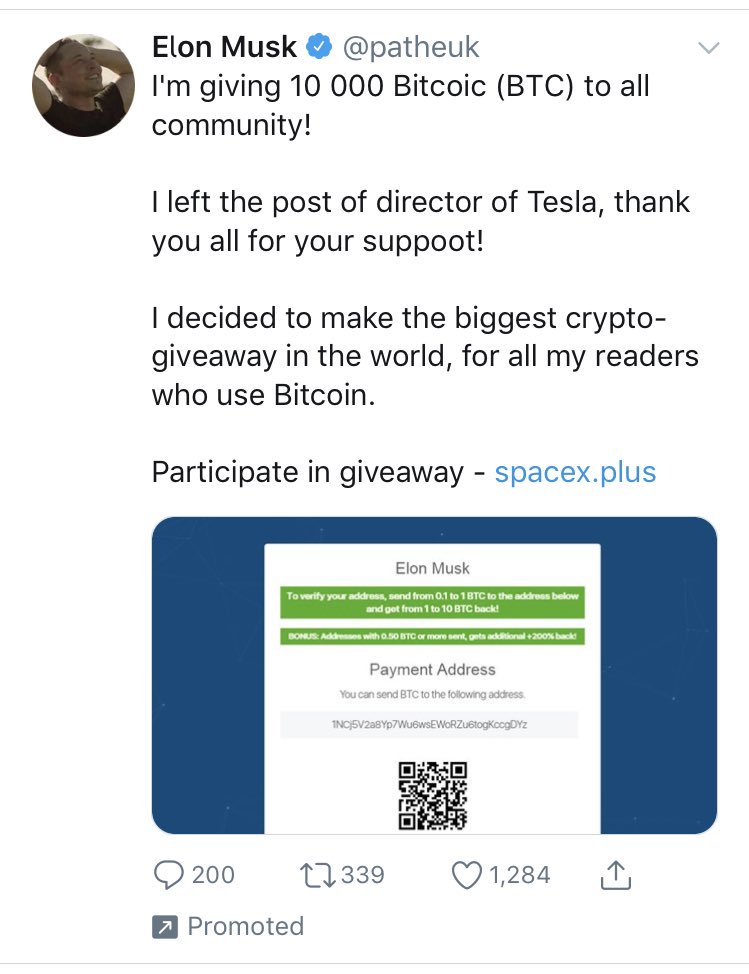 To skirt Twitter security measures, scammers subtly changed one of the characters in the name, while still maintaining a display name that appeared to be “Elon Musk” at a glance, preculding Twitter from automatically flagging the account.

Daily Beast reporter Lachlan Markay reported that sources on Pallone’s campaign confirmed the account was hacked, albeit without any political goals saying, “Just looks like a Bitcoin Scam.”

If you fall for this you deserve to be scammed tbh pic.twitter.com/RKjd90UsBt

He subsequently added that one of the BTC wallets used in the scams received $158,256 and that the payments “are still coming.” At press time, the address referred to by Markay had a final balance of 26.38 BTC ($168,930).

Pathe U.K. later confirmed that it had recovered control of its account and deleted the fake Elon Musk tweets.

Other high-profile individuals in the crypto and tech space have been similarly impersonated. In April, founder and CEO of Telegram Pavel Durov tweeted a warning, telling his followers that the messaging app was experiencing downtime due to its server clusters overheating. Durov’s tweet drew attention to fake crypto giveaway scammers who posed as the Telegram CEO and claimed to offer crypto to users as a “thank you for [their] support.”

In January, Twitter saw an influx of Litecoin (LTC) founder “Charlie Lee” impersonators, with multiple imposters posing as the LTC creator and promoting a fake LTC giveaway. Most of the scammers were using Twitter handles with names very similar to the real Charlie Lee, @SatoshiLite, such as @SatoshiLitez and @SatoshiLitee_.