Iran is set to redenominate its fiat currency, removing four zeros to create a new fiat called toman as demand for crypto is surging.

62234 Total views
133 Total shares
Listen to article
0:00
Analysis
Own this piece of history

Ravaged by crippling hyperinflation, Iran’s Parliament has sanctioned the redenomination of its fiat — the rial — by replacing it with a new currency called the toman. According to the plan, each toman will be worth 10,000 rials.

The redenomination plan effectively removes four place values (four zeros) from the Iranian national currency as part of efforts to kickstart an economic recovery from the country. It is a move that echoes steps taken by other countries like Venezuela and Zimbabwe amid huge inflation.

With the United States exiting its nuclear deal with Iran and reintroducing sanctions, the country’s economic situation has been in a tailspin. Virtually frozen from the international scene, Iran has been facing a severe liquidity crunch and foreign exchange shortage.

Typically, people living in countries suffering from an economic crisis turn to cryptocurrency not only as a way of preserving wealth but also as a means of carrying out international transactions. Iran’s case is not dissimilar, with Bitcoin’s (BTC) price even rising to a hefty 300% premium on peer-to-peer exchanges like LocalBitcoins.

In May 2018, U.S President Donald Trump exited the Joint Comprehensive Plan of Action — commonly known as the Iran nuclear deal — and reimposed sanctions on Tehran. This decision put enormous pressure on the country’s already fragile economic situation. Commenting on the impact of U.S. sanctions on Iran, Babak Behboudi, the CEO of blockchain innovation firm Synchronium remarked:

While the deal was in place, Iran’s economy was open to the international scene, benefitting especially from increased oil exports. Indeed, the country’s president, Hassan Rouhani, ran his 2017 election campaign based on programs that would leverage the opportunities afforded by the accord with the U.S. 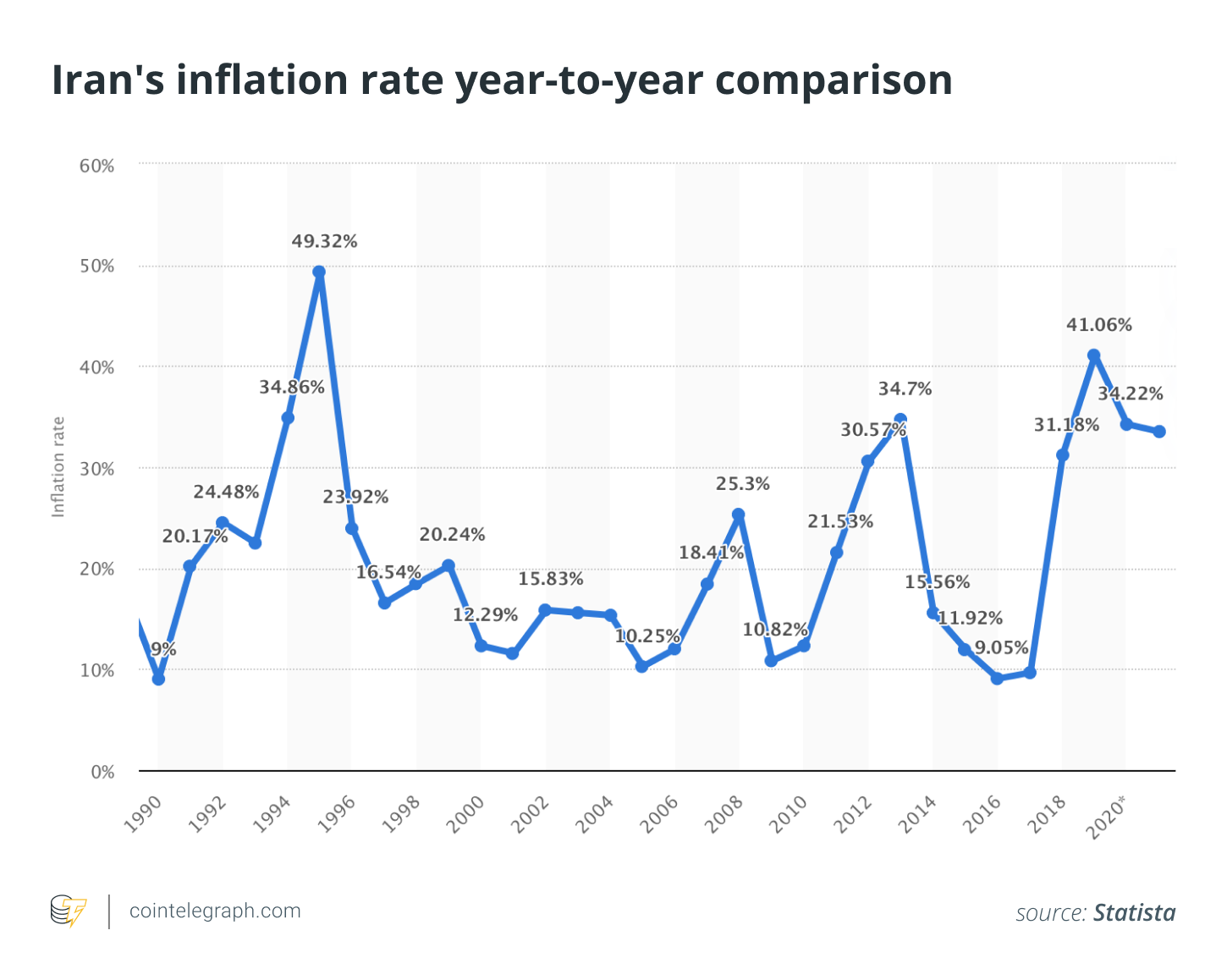 However, the rial was evidently deteriorating even before the U.S. repudiated the nuclear deal, with the country’s inflation rate more than tripling between 2017 and 2018. Indeed, the lifting of sanctions in 2016 did little to spur any growth in real gross domestic product. Between 2017 and 2018, protests broke out in many Iranian cities with people voicing their dissatisfaction over the rising cost of living among other grievances. By August 2018, Iran’s rial had lost more than 80% of its value in barely a year.

At the start of May 2020, the bid-ask spread — the difference between the buying and selling rate for forex — stood at about 9,000 rials. Exporters of non-essential goods in Iran use Nima, and the widening bid-ask spread on the market means having to liquidate overseas earnings at a much cheaper rate that, in turn, harms the profitability of such ventures.

The existence of a secondary forex market is in part due to the inability of the authorities to create a unified exchange rate. The government’s failure in this regard meant that a greater percentage of forex deals moved to the black market where participants could speculate on the unending volatility of the rial–dollar exchange rate.

At the time of writing, while the official government rate is about 42,000 rials to $1, the black market rate is almost four times higher — with $1 selling for 163,500 rials. Indeed, the Nima rate has also begun to approach the black market figures with $1 worth 157,320 rials.

Iran’s economic situation has also not been helped by the outbreak of COVID-19 with the country’s currency going into a deeper dive since February. The country has been hit hard by the deadly coronavirus with over 6,500 deaths from about 104,000 cases since the first confirmed infection in mid-February. According to an April report from the World Bank due to the dwindling oil revenues, the country’s GDP growth will continue to lag. The report reads:

“Persistence of lower oil prices and export volumes (e.g., due to a significant decline in China’s oil demand) would result in a substantially larger overall shock and fiscal deficit in 2020/21.”

On Monday, May 4, 2020, Iran’s Parliament authorized the redenomination of the country’s fiat, eliminating four zeros and replacing the rial with the toman. According to the plan, each toman will be equivalent to 10,000 rials. The move, more than a year in the making, began with a draft bill prepared by the governor of the Central Bank of Iran. Opting for a redenomination also marks a departure from the usual approach of Iran devaluing its currency — which happened about 3,500 times since 1971. 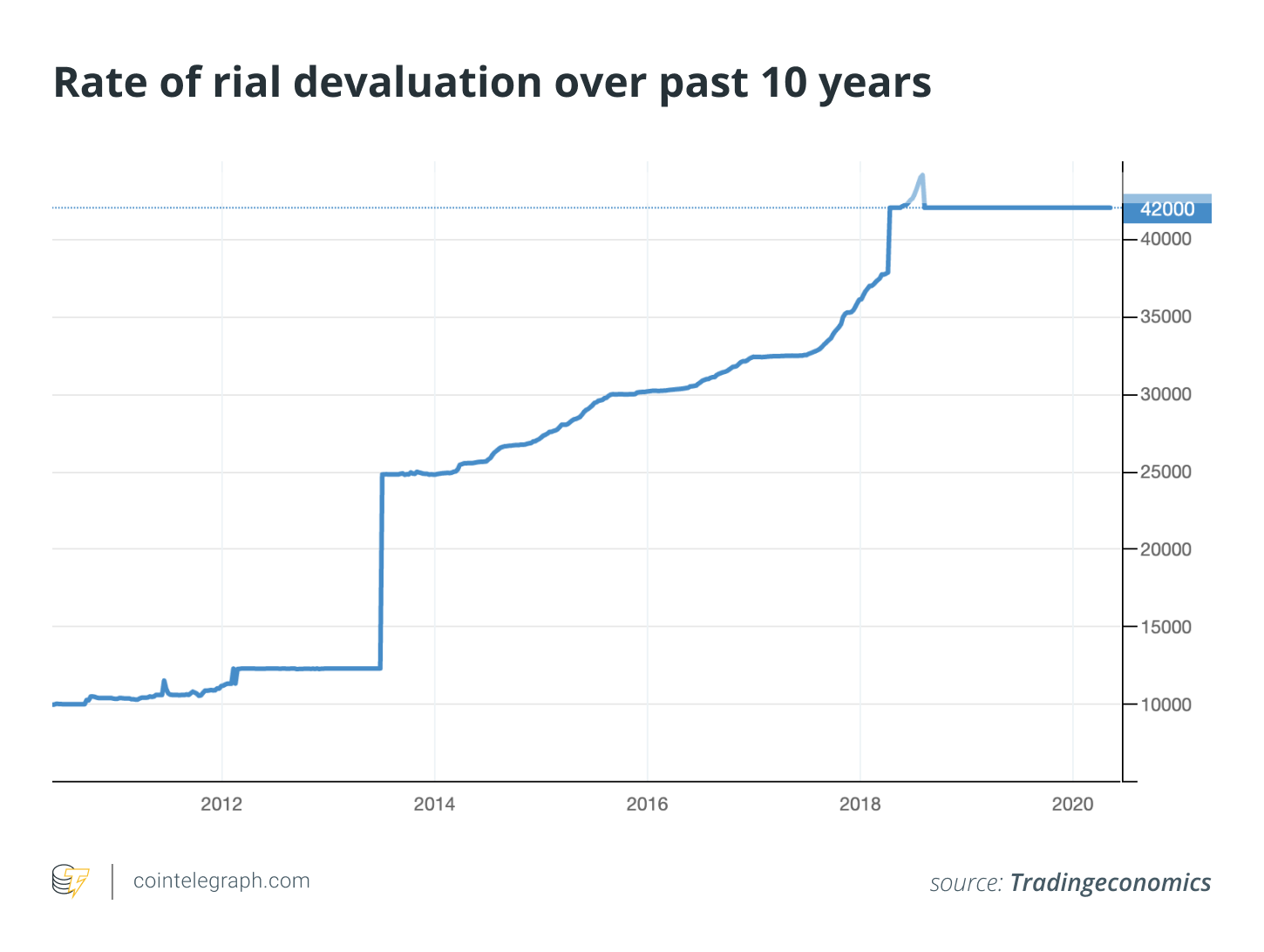 Some commentators like government spokesperson, Ali Rabiei, have said the move will help to simplify financial transactions in the country. However, critics of the plan believe it does nothing to solve the fundamental issues affecting the economy.

Tehran late to the party

In a conversation with Cointelegraph, Ali Beikverdi, the CEO of crypto exchange deployment service bitHolla, remarked that Iranians have already been redenominating the country’s fiat to suit different purposes. According to Beikverdi: “Currency denomination in any country doesn’t solve any financial or economic issues. The only thing it does is inflation. However, I must say in Iran this has been a matter of debate for quite some time.” Explaining the confusion caused by multiple rial benchmarks in the country, Beikverdi added:

“While banknotes use Iranian rial, people already drop one zero and call it toman. So, one toman = 10 rial today. To add more to that confusion, people even drop three more zeros from toman to make the numbers smaller, and that is very confusing if you are not familiar with it. So, the currency denomination has already happened among people for simplicity, and this is nothing new.”

With multiple forex benchmarks existing within the country, the government’s redenomination plan might struggle to achieve the desired results especially given the historical precedence surrounding such actions. For Behboudi, it is still too early to determine the effectiveness of the government’s plan, arguing that taking four zeros of a currency will not have much effect in itself:

“Such an effort can be a good small step for a serious, wider, and more effective series of reforms, including well-planned privatization of the economy, decreasing the monetary system expenses, and ease of banking operations.”

In a conversation with Cointelegraph, a spokesperson for Iran’s Ministry of Finance derided the plan to create a new fiat currency for the country, declaring:

“Everybody in the country knows that redenomination has no effect on inflation. Most economists think it is not a sustainable time for redenomination. Due to coronavirus and oil prices, the revenue of the government has fallen sharply, and at the same time, the costs have grown. So, we expect high inflation.”

Bitcoin comes onto the scene

Amid the backdrop of the plans to revamp Iran’s currency, Cointelegraph reached out to Areatak, a blockchain solutions provider based in Tehran. Back in May 2019, Cointelegraph reported that Areatak — in partnership with the Informatics and Services Corporation of Iran’s central bank — was developing Borna, a national blockchain project aimed at transforming the country’s banking and financial sector. In a message to Cointelegraph, Areatak CEO Saeed Khoshbakht revealed the latest updates with the project, stating:

“Borna infrastructure and platform is passing the first phase of test and it will be ready soon to launch. As mentioned in the whitepaper, Borna can host central bank cryptocurrency, and maybe it is used in this economic evolution. But the decision is for the central bank and ISC.”

While the government tries to solve the growing inflation problem, crypto stakeholders in Iran say the situation favors a more broad-based adoption of cryptocurrencies. Indeed, high ranking officials within the country’s government and military have called for the use of digital currencies to evade crippling U.S. sanctions. Commenting on the growing adoption levels of crypto in Iran, Khoshbakht remarked:

“If we analyze the adoption of cryptocurrency usage in the world we find two types of countries are in front of the list. Countries with a lack of digital payment systems and countries with high inflation. Because of High inflation in Iran, people don’t trust to national currency and try to buy everything such as real estate, gold, stock, other currencies like the U.S. dollar and cryptocurrency.”

Tehran’s stance on crypto mining has noticeably softened with the authorities allowing Bitcoin miners to set up shop in the country. As previously reported by Cointelegraph, Iran has issued about 1,000 licenses to crypto miners in the country.

Related: Five Countries Where Crypto Regulation Changed the Most in 2019

Earlier in May, the country’s Ministry of Industry, Mining and Trade also gave the go-ahead to Turkish crypto mining firm iMiner to establish a 6,000-rig facility in the Semnan province. Iran has also given tax breaks to crypto miners on the condition that they repatriate all foreign earnings. According to Behboudi, crypto is primed for even greater adoption in Iran, adding:

For Beikverdi, the economic crisis in the country is only setting the stage for more people to choose cryptocurrencies. “Once you see your currency loses its value more than five times in about two years, as an investor, you seek alternatives as a store of value,” remarked the bitHolla CEO.

Indeed, Bitcoin P2P trading data shows significantly higher BTC premiums in Iran since the start of 2020. On LocalBitcoins, Bitcoin has steadily sold for between 300% and 400% of the global average spot price.

For example, while Bitcoin traded at around $7,800 in early January, the quoted price for BTC on LocalBitcoins was the equivalent of over $25,000. While BTC recovered from the Black Thursday flash crash of March 12, the cryptocurrency seemingly traded for $21,000 while the global average hovered above $5,200.