Iran’s central bank, in partnership with a local blockchain solutions provider, is developing a national blockchain platform called Borna that will be used to revamp the country’s ailing banking and financial markets.

The Central Bank of Iran (CBI), via its Informatics and Services Corporation (ISC) and in conjunction with Areatak — a Tehran-based blockchain solutions provider — is developing a national blockchain project for its banking and financial sector.

Called the Borna platform, Iran hopes to use the project to revamp its banking ecosystem, creating a digital financial economy that will replace the current legacy system. There are also future plans to open up the platform to local private establishments, creating a unitary monetary and banking system for the country.

Given the country’s current standoff with the United States and the renewal of economic sanctions by the latter, rumors persist that Borna is an attempt by Tehran to circumvent these sanctions. Project stakeholders say such reports are unfounded and that Borna is only meant for use within the country’s borders — and doesn’t yet support any cryptocurrency token.

Since 2018, Tehran has reportedly become increasingly interested in cryptocurrency and blockchain technology. Like other countries grappling with economic sanctions from the U.S., Iran has identified blockchain technology as a way of protecting its financial interests from the negative consequences of an economic blockade championed by Western powers.

According to local Iranian publication Al-Monitor, the ISC and Areatak are developing numerous protocols for Borna — the proposed Iranian national blockchain platform. The developers expect Borna to function as a central digital platform for the country’s banking and financial sectors.

One of the main aims of the Borna project is to reduce the entry requirements in terms of cost and technical expertise required to develop decentralized ledger technology (DLT) systems. Once launched, stakeholders expect that the country’s apex bank will allow fintech startups to be onboarded to the platform to create a truly digital landscape for Iran’s banking and finance industry.

The ISC exclusively owns the Borna platform, with Areatak acting as its private contractor building several prototypes for testing. The Areatak developers are currently building the platform on the Hyperledger Fabric — the IBM open-source enterprise blockchain platform.

One of the important features of the Hyperledger Fabric is its plug-and-play smart contract feature that makes protocols like consensus easy to design and program. Recently, researchers out of the University of Waterloo in Canada announced modifications to the Hyperledger Fabric that promises significantly faster transactional capabilities.

Back in January 2019, the project team published the white paper for the Borna blockchain platform. According to the technical document, the project will have two main application layers: competitive and noncompetitive.

Much of the current efforts are being focused on the noncompetitive application layer that will offer three main solutions: digital auditing, Know Your Customer (KYC) protocols and token management systems. The developers hope that Iran’s top bank will be able to use these core functions to effect robust monitoring and supervision of the country’s financial sector once the industry becomes fully digitized.

In a private chat with Cointelegraph, Shahrzad Pakgohar, a blockchain solutions analyst and consultant at Areatak, highlighted the importance of the Borna blockchain beyond financial applications, saying:

“[The] Borna platform has no limitation for non-financial institutes and they can use services of Borna. For example, our digital identity solution that is used for banking KYC can be used for any other use case that needs a digital identity.” 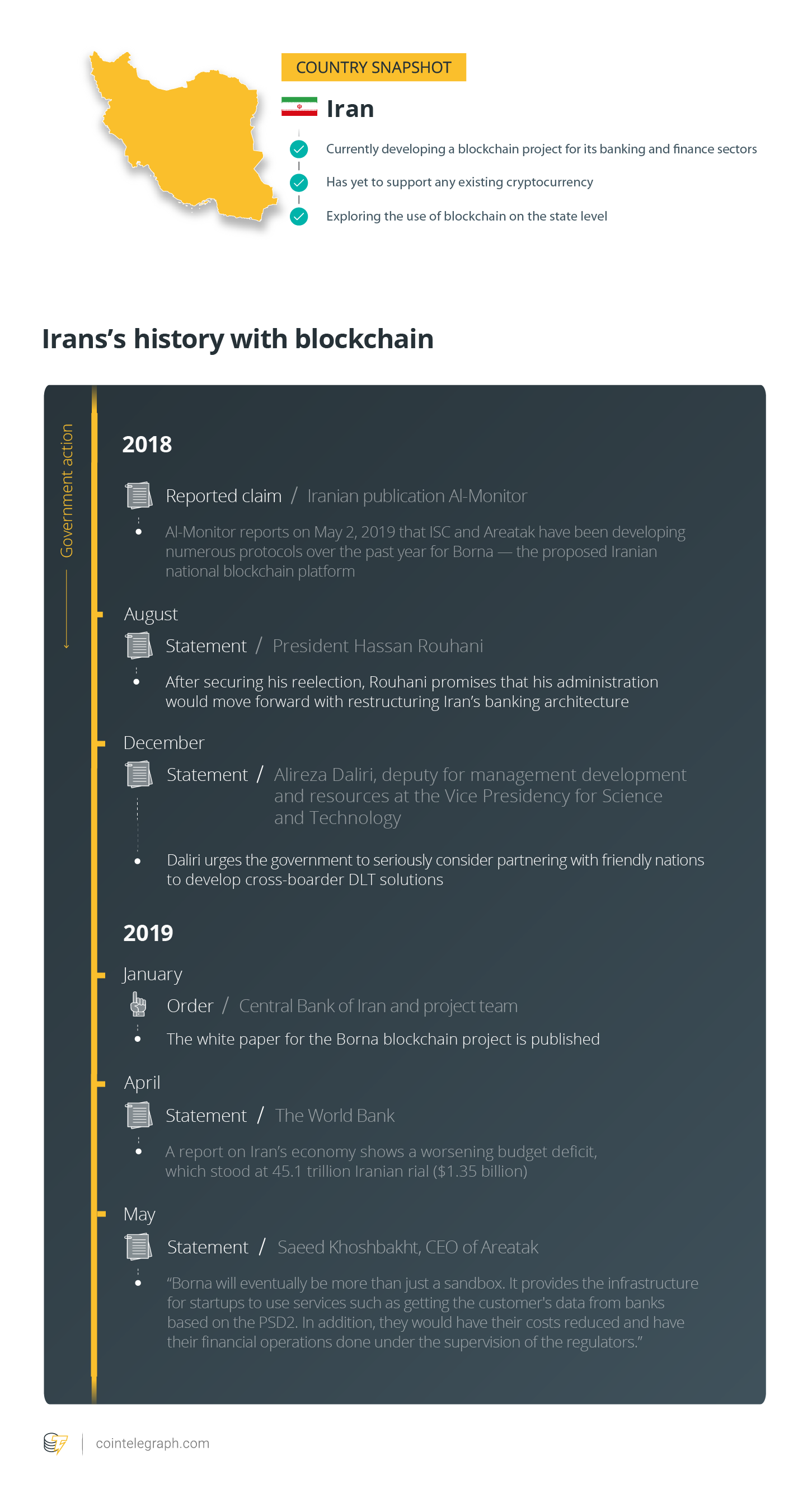 At the heart of the Borna project is the upscaling and complete revamping of Iran’s financial industry. Regulators see blockchain technology as having the key to implement radical changes in the country’s banking and finance sectors.

Back in December 2018, Alireza Daliri, deputy for management development and resources at the vice presidency for science and technology, described blockchain technology as having the potential to improve the Iranian economy. At the time, Daliri urged the government to seriously consider partnering with friendly nations to develop cross-border DLT solutions.

When fully launched, Borna could theoretically provide the CBI with the tools to eliminate money laundering and other forms of illicit financial activities, while operating within a superior security paradigm — as all financial data will exist on an immutable digital ledger.

Borna also falls in line with Tehran’s attempt to introduce much-needed reforms in Iran’s banking sector that have remained largely untouched since the Islamic Revolution of 1979. Back in August 2018, President Hassan Rouhani, after obtaining his reelection, promised that the administration would move forward with restructuring Iran’s banking architecture.

President Rouhani and the Iranian people are currently grappling with a deteriorating economic situation — further worsened by the renewal of U.S. sanctions. An April 2019 report on Iran’s economy by the World Bank showed a worsening budget deficit, which stood at 45.1 trillion Iranian rial ($1.35 billion).

According to the report, Iran’s widening budget deficit is due to a 62% shortfall in projected revenue. The country’s inflation rate currently stands at around 30%, with the World Bank forecasting a continued rise in that figure following Tehran’s devaluation of the Iranian rial.

With the Iranian parliament currently examining likely changes to the country’s banking laws, Borna may yet play a pivotal role in the future destiny of Iran’s financial market. The CBI could use the proposed Borna platform to implement the legislative changes made by the Islamic Consultative Assembly — Iran’s parliamentary body.

For Saeed Khoshbakht, the CEO of Areatak, Borna could potentially hold the key to upscaling Iran’s finance market to meet global standards. Speaking to Al-Monitor earlier in May, Khoshbakht opined:

“In terms of international presence, Borna developers are striving to use platforms, tools, and solutions that are globally accepted in building the country’s new technical infrastructure. Borna's developers are trying to gradually turn international frameworks into a part of the platform’s internal policies.”

“Those narratives about bypassing sanctions are just media games.”

Given the decision by the Trump administration to issue renewed sanctions on Iran, there have been reports that Tehran could turn to cryptocurrency and blockchain technology to circumvent the economic blockade.

As previously reported by Cointelegraph at the start of 2019, local media outlets in the country were issuing reports of the CBI unveiling a central bank-issued digital currency (CBDC). There were also reports that the country might be working on an alternative to SWIFT, following the delisting of Iranian banks from the global settlements system.

Cointelegraph had a private chat with the Areatak CEO in which he provided further clarity on the Borna platform vis-à-vis talk of bypassing U.S. sanctions. According to Khoshbakht:

“There are people in Iran who might have the mindset that they would be able to bypass the sanctions using blockchain technology and that could be the reason why a lot of people would think that we'd be trying to do the same, but in the case of Borna the reality is that the project is just meant to utilize blockchain's capabilities in the enterprise level and especially in the financial and banking industry. None of the developers, strategists, and architects working on Borna have ever worked on international payments.”

Back in mid-February 2019, Alirëza WJ Arabi, the chief solutions architect at Areatak, published a blog post on Medium debunking the speculation about Borna being part of Iran’s attempt to circumvent sanctions. An excerpt from the report reads:

“Borna platform is in no way ‘a complementary infrastructure’. Instead, it provides the main standard infrastructure to create a blockchain-based financial layer for Iran’s banking ecosystem. in which, key characteristics of the shared platform and its necessary modules have been foreseen. Such a platform will be executed on top of the current monetary and banking systems of Iran as a domestic solution designed to be used only and only inside the borders of Iran with respect to the required financial transparency for the people, the government of Iran, and international standards such as combating of money laundering and the financing of terrorism.”

Meanwhile, Khoshbakht said that there was the possibility of expanding the functionality of the Borna blockchain platform to include token issuance. However, the Areatak chief said such plans will find expression only within the country. Explaining further, Khoshbakht declared:

“If one day we design a token for the platform it will just a new payment utility parallel to current domestic solutions and it would not have an international use case.”

Pakgohar played down the rumors, saying:

“Those narratives about bypassing sanctions are just media games. They are not about reality. How can a national infrastructure that has no connection with international parties, be able to bypass sanctions? Borna is focused on national use cases and is hosted by national organizations. Tokenization of assets or Rial in the future is limited to Borna platform transaction cases, not an international transaction.”

Recently, Iran’s blacklisting in the global finance arena reached another level with reports that popular peer-to-peer cryptocurrency exchange LocalBitcoins banning Iranian users. With the platform being located in Finland, it appears the move to blacklist Iranian users is part of efforts to comply with financial regulators in the country.

Iran has reportedly been mulling the introduction of its own state-issued cryptocurrency. Rather than create a digital token backed by gold or oil like Venezuela’s petro, Iran’s plans have mainly considered the floating of a crypto-rial to preserve the monopoly of its fiat currency in financial settlements within the country.

Concerning the possibility of issuing a crypto-rial on the Borna blockchain, Khoshbakht commented:

“Experiments on the infrastructure and platform have taken place and there's no specific challenge on the technical side. But any sort of token issuance will be done by the Central Bank's order and they have the final say for the platform to actually include a digital token or not.”

An operational sandbox for commercial banks and fintech startups

For the team at Areatak, Borna can act like a blockchain-based app store in which banks can offer similar services that will contribute to the establishment of the competitive layer. In turn, the banks and other financial institutions can earn revenue via the four available fee models.

However, the onboarding for some banks might be highly capital-intensive, especially in the short term. Some banks and financial establishments will have to perform certain upgrades to their systems before they can even be integrated into the Borna blockchain environment.

By upscaling their operations to run seamlessly on the Borna platform, stakeholders hope that commercial banks in the country will experience an improvement in their compliance infrastructure to meet international standards.

Going forward, Khoshbakht expects Borna to move beyond being an operational sandbox for banks and fintech firms, declaring:

“Borna will eventually be more than just a sandbox. It provides the infrastructure for startups to use services such as getting the customer's data from banks based on the PSD2. In addition, they would have their costs reduced and have their financial operations done under the supervision of the regulators. This way we can find a balance between the development of the startups and the said supervision.”

Cost reduction might serve to make Borna more appealing, especially to fintech startups and cash-strapped banks. In an economy currently in the midst of struggles, the Borna blockchain could hold the key to optimizing financial transactions while ensuring positive profitability and cost trade-offs.