Researchers examine whether a message signed by a 2009 miner calling Craig Wright a fraud may have been signed by Satoshi Nakamoto.

15049 Total views
87 Total shares
Listen to article
0:00
News
Own this piece of history

On Monday, a Bitcoin (BTC) miner — or multiple Bitcoin miners — signed a message calling Craig Wright a fraud. One of the addresses used had been previously attributed to the creator of Bitcoin, Satoshi Nakamoto.

The message was signed with 145 signatures belonging to the 145 corresponding addresses, and one of those addresses — 12CTHhyJtr49LgoUShbWgebLBviLAFj6nj — was a coinbase address for the Bitcoin mined in block 30169.

Previous research conducted by Sergio Demian Lerner identified this block as one mined by Satoshi.

However, Lerner told Cointelegraph that this is a case of false-positive attribution:

“It's a false positive. Clearly looking at the graph I see that the algorithm chose the wrong slope. The algorithm is not perfect. It's explained in the post. When there is a 'cloud' of points, it just tries to pick the one that is close to Patoshi slope, having the right least significant byte attributes.”

BitMEX Research has also weighed in, concluding that two of the addresses used in the statement have “weak allocation” to Satoshi: 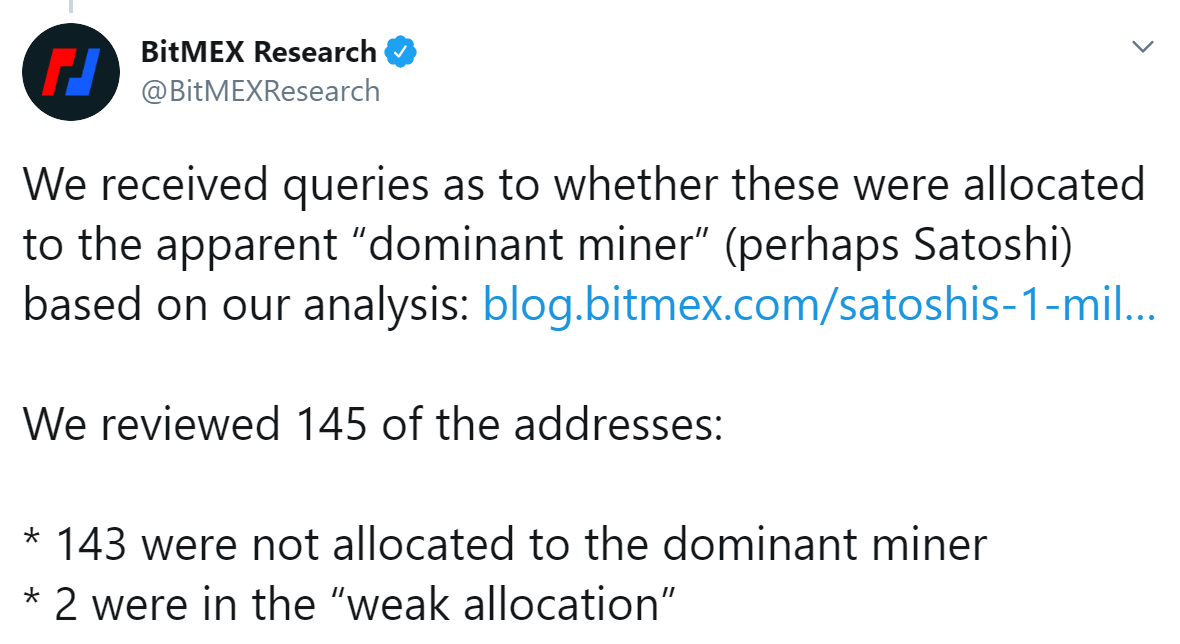 The blocks that BitMEX Research believes have a chance to have been mined by Satoshi are 30255 and 33270, which are not identified as belonging to Satoshi by Lerner’s algorithm.

Whoever signed the message may have been involved in Bitcoin from its early days, as the blocks go back to 2009, when there were still very few miners besides Satoshi. The message read:

“Craig Steven Wright is a liar and a fraud. He doesn't have the keys used to sign this message. The Lightning Network is a significant achievement. However, we need to continue work on improving on-chain capacity. Unfortunately, the solution is not to just change a constant in the code or to allow powerful participants to force out others."

Also, they support the Lighting Network and do not believe an increase in block size is the right approach to improving on-chain scalability, which could be construed as them siding with the conservatism of the Bitcoin core community, not Bitcoin Cash (BCH).

Furthermore, their support for the Lightning Network may indicate support for Blockstream, the company co-founded by the inventor of proof-of-work consensus, Adam Back. His Hashcash was a major stepping stone for Satoshi and was cited in the Bitcoin white paper.

Since Satoshi left the project, there have been very few messages that might be attributed to him. In 2014, he declared:

“I am not Dorian Nakamoto.”

Perhaps Satoshi reactivates himself once in a while to steer the Bitcoin boat in the right direction.