The rejection of the Winklevoss twins’ Bitcoin exchange-traded fund in 2017 ushered in both new attention from investors and new volatility, data suggests.

Uploaded to social media by well-known statistician Willy Woo on Nov. 1, a chart of Bitcoin volatility shows a new phase beginning around March 2017.

This, the time at which U.S. regulators rejected the Winklevoss’ ETF application, was nonetheless a watershed moment for Bitcoin.

“My thesis has always been that the 2017 Winklevoss ETF attempt was the first time in Bitcoin's history that it was described as a financial instrument instead of drug money,” Woo summarized.

“It was covered in the WSJ. Smart money came in, the rise of crypto quant funds.” 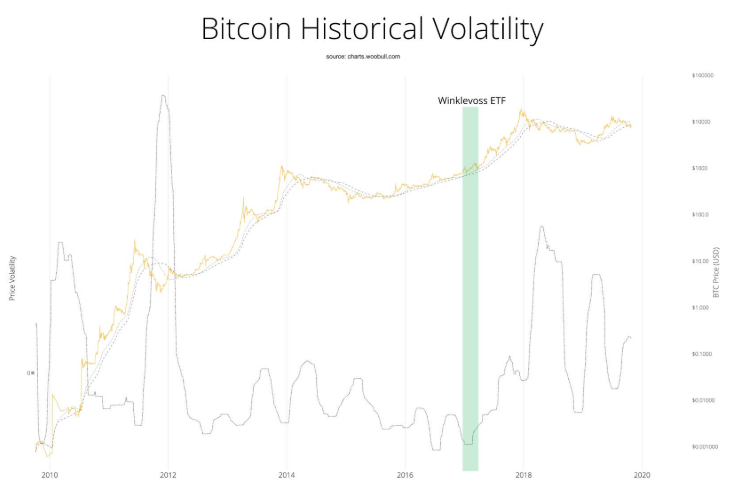 Bitcoin volatility before and after the first Bitcoin ETF. Source: Willy Woo, Twitter

According to Woo’s chart, the ETF denial formed the definitive reversal of lessening volatility which had characterized Bitcoin since 2012.

Thereafter, volatility increased, albeit not to the extent seen during that year. Further ETF rejections similarly failed to produce the same price impact seen in March 2017.

As Cointelegraph reported, volatility nonetheless remains a point of reflection for market participants keen to attract more new investment into the cryptocurrency space.

Earlier this year, Brian Armstrong, CEO of cryptocurrency exchange Coinbase, highlighted the need to reduce the impact of volatility through the use of instruments such as stablecoins.