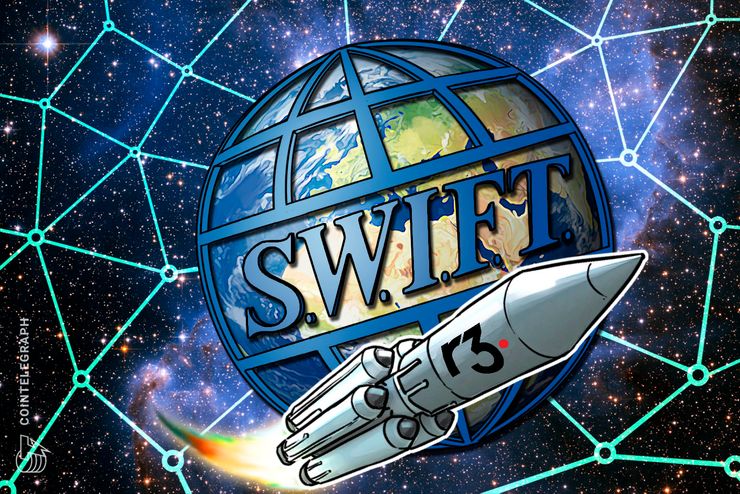 This article has been updated to reflect the breaking news events.

Major global banking payments network SWIFT has revealed it plans to launch a Proof-of-Concept (PoC) of a gateway — dubbed GPI Link — that will allow enterprise blockchain software firm R3 to link to GPI (Global Payments Innovation) payments from their platform.

Speaking at the Paris Fintech Forum on Jan. 30, CEO Gottfried Leibbrandt said SWIFT would be formally announcing its plans for a Proof-of-Concept (PoC) with R3 later today.

Leibbrandt was speaking for the first time in a joint panel with Brad Garlinghouse, CEO of Ripple — which has long touted itself as a blockchain competitor to SWIFT’s global interbank network. Garlinghouse had just recently commented in November 2018 that “what we are doing on a day-to-day basis is in fact taking over SWIFT.”

SWIFT — which counts 10,000 banks in its network — last year took part in several blockchain pilots, but has not to date substantially rehauled its legacy wire transfer architecture.

“Our new GPI platform is extremely interoperable and open, and we’ve always had links to other networks [...] we are announcing later today a Proof-of-Concept with R3 blockchain on trade, where you can initiate a payment on the trade platform, and then it goes into GPI. So we’re exploring interconnectivity with a lot of things.”

According to a press release from SWIFT shared with Cointelegraph, those using the R3 platform will now be able to authorize payments through GPI Link, settling the GPI payments with the users’ banks, and having the credit confirmation reported back to the trade platforms via the GPI Link when they are completed.

The PoC will eventually expand to support other DLT platforms, as well as non-DLT and e-commerce trading platforms.

SWIFT’s GPI aims to streamline and increase the transparency of cross-border payments. As the service continued to gain traction last year, commentators were quick to suggest that its expansion appeared to have been galvanized by mounting competition from the blockchain sector.

At the time, SWIFT voiced its doubts as to whether the disruptive technology could work at scale, claiming that all banks’ blockchain projects to date have largely been “either in-house or bilateral projects [...] As you bring scale, you get escalating complexity.”

Having just recently launched its Corda Network, R3 has gathered over 300 partners from across multiple industries — both the private and public sector —  to collaborate on developing Corda, its open-source blockchain platform, as well as its business-oriented offshoot Corda Enterprise.

Corda has seen a wave of adoption news in recent months; in December alone, R3’s Corda-based Euro Debt Solution was used by a German-French-Dutch triad of banks to successfully complete a live commercial paper transaction; major Japanese financial services company SBI Holdings announced its partnership with R3 to boost the use of Corda in Asia; and 26 French companies and five major banks completed a Know Your Customer (KYC) test using Corda.

At press time, R3 has not responded to Cointelegraph’s request for comment.