This article has been updated to include Liverpool’s denial of the Tron partnership.

Tron CEO Justin Sun said in a tweet on April 24 that the Tron Foundation, the firm behind the 11th biggest cryptocurrency Tron (TRON), will reportedly partner with British professional football club Liverpool.

However, a Liverpool spokesperson reportedly told Decrypt Media that “Liverpool Football Club has confirmed that it does not have a partnership with Tron.”

While Sun did not include any specific details about the nature of the upcoming partnership — which has since been denied — the tweet features a short video invitation from Liverpool Football Club (LFC), with the Tron logo appearing in the video.

The Tron CEO claimed that he is looking forward to explore this new partnership, adding that it is an official partnership and that more details will be released soon.

Jesse Powell, the head of crypto exchange Kraken, posted on Twitter a screenshot of an email alleging to be from Liverpool about a partnership that he had dismissed as spam. 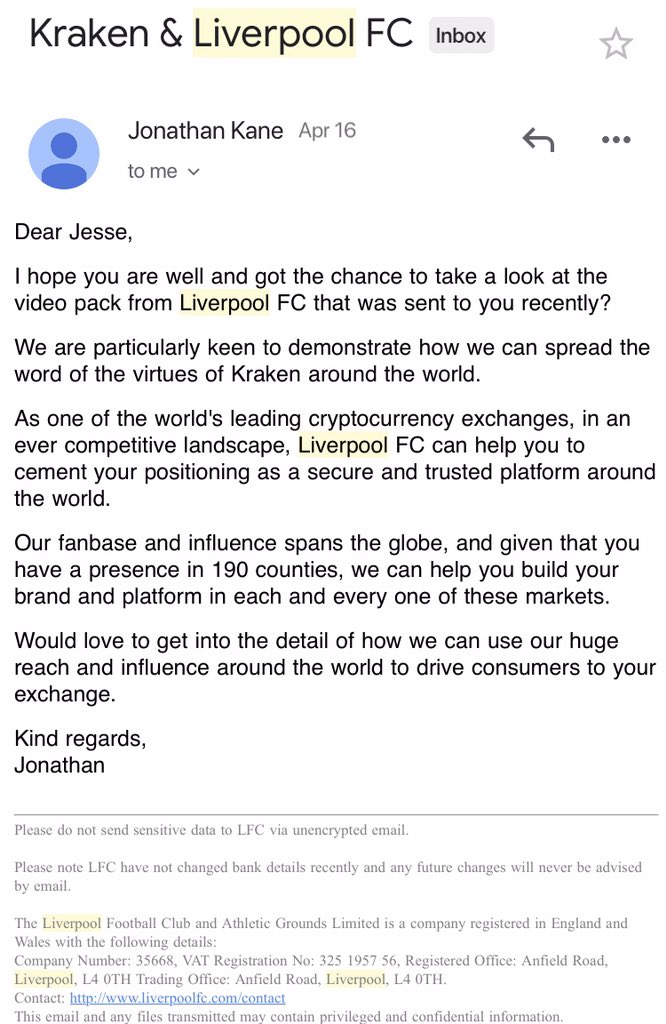 Misha Lederman, co-founder of Tron-related blockchain startup IAmDecentralized, said that the new alleged partnership between Tron and LFC “would be beyond massive for crypto to say the least.” He also added that he “can already see the TRON logo on that red @LFC shirt at Anfield.”

Samuel Austin, co-founder and developer at blockchain payment firm HummingPay, agreed that LFC’s alleged acceptance of Tron would help to bring exposure to Tron’s mission. He suggested that Liverpool could develop their own live streaming platform, which could probably be assisted through Tron’s peer-to-peer (P2P) platform BitTorrent, which was acquired by Tron in July 2018.

In late 2018, Brazilian premier league soccer club Atletico Mineiro launched a fan token dubbed “GaloCoin,” a cryptocurrency that is tied to the national fiat currency exchange rate and is equal to one Brazilian real. The club’s fan token had been preceded by two others, with French soccer club Paris Saint-Germain and Major league Italian soccer club Juventus both launching their own in September 2018.