Bitcoin Is Outperforming Every Mainstream Asset Class in 2020

With less than three days left until the halving, Bitcoin is currently outperforming every mainstream asset class for 2020 so far.

Data published by market research firm Fundstrat shows that Bitcoin (BTC) is the top-performing asset class of 2020 so far.

The data, posted to Twitter by Fundstrat’s Thomas Lee, shows Bitcoin to have outperformed every other asset class by at least 19% — with BTC having gained 39% since the start of the year. 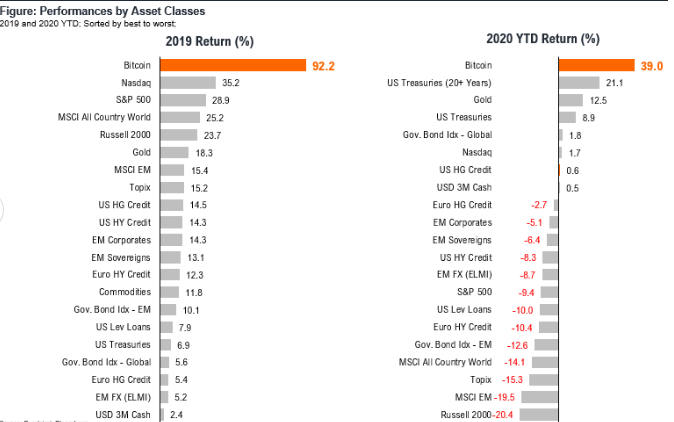 Global government bonds and the Nasdaq increased by 1.8% and 1.7% respectively, while high-grade U.S. credit and cash funds post roughly 0.5%. All other asset classes are currently in the red.

Bitcoin on track to outperform for the second consecutive year

The post also details the performance of the top 13 asset classes of 2019, which Bitcoin again tops with a 12-month gain of 92.2%.

Bitcoin is also the best performing asset of 2017 with a gain of over 1,550% and would have comprised the top commodity of 2016.

As of this writing, Bitcoin appears to have gained 33.5% from $7,205 to $9,620 since the start of the year — ranking BTC as the fifth-strongest performing of the top ten cryptocurrencies by market capitalization YTD.

Ether (ETH) and Stellar (XLM) follow with gains of roughly 61% each.