Blockchain Registers for Recording Ownership Rights Around the World

Here is a list of where and how to secure ownership rights for businesses and real estate through a blockchain.

The use of blockchain to cement ownership rights for real estate and business has been ongoing since 2016, when the technology was first used to organize new forms of registries and registration of transactions. The blocks are used to record information onto the blockchain system, which can then certify the process of transfer of ownership of the property or entity.

This process excludes intermediaries that collect commissions in the process of, for example, conducting real estate transactions while also lowering the risk of fraud. Specialized blockchain platforms can prevent data forgery and simplify the process of checking real estate objects or business debts before deals take place.

That is why, in 2016, the National Agency of Public Registry of Georgia launched a blockchain project on land management with the Bitfury Group. In 2017, the State Land Cadastre of Ukraine switched to the Exonum platform for private blockchains, which is also supported by Bitfury.

The latest move came in early October this year in the United Arab Emirates, as the Department of Economic Development of Dubai announced a transition to a blockchain-based platform for the single enterprise market. The platform is designed to increase the convenience of doing business in Dubai and enable agents to obtain a license for managing trade licenses and corporate clients.

Thus, governments of different states are increasingly participating in, or encourage the creation of registries and are looking to record ownership through the blockchain. So, here is a list of countries where registries are either piloted or already used. 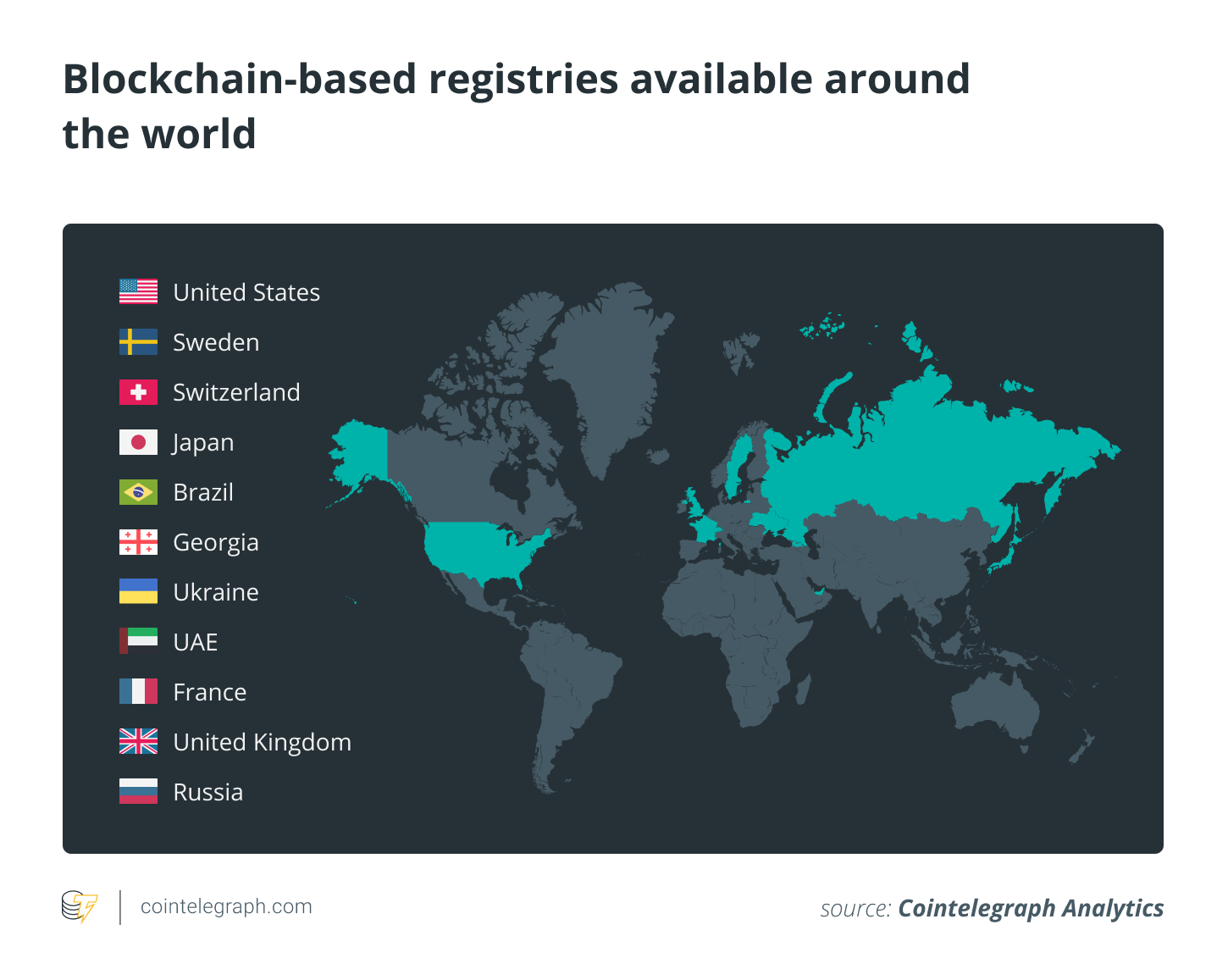 In the U.S., blockchain has been interacting with the real estate sector for some time now, and different companies are trying to occupy this attractive niche. In 2014, major U.S. retailer Overstock.com began to accept BTC payments and founded its subsidiary Medici Ventures to invest in blockchain projects. One of the venture’s projects was Medici Land Governance, which has been developing a global land blockchain registry since 2018.

Medici Land Governance uses blockchain and other technologies to support land management, appropriation and administration through a reliable public registry of land ownership. The project currently operates in the U.S., Zambia, Rwanda, Mexico, and St. Kitts and Nevis, where memorandums of understanding have been established with local governments.

Another Californian blockchain-based real estate company, Propy, aims to connect buyers and sellers through smart contracts in a peer-to-peer system that enables users to acquire properties completely through the blockchain, fully avoiding paperwork and mediation. This is useful for global real estate transactions, where various national laws confuse the process.

In January 2018 in South Burlington, U.S., the project began pilot tests for the purchase and sale of real estate, and in March 2018, the company conducted the first real estate transaction completed on a blockchain in the U.S. without any intermediaries or signing of physical papers. The government of Vermont accredited and registered the deal on a smart contract that exists in the form of an electronic QR code containing all the necessary data on ownership rights.

In Delaware, where over half of all publicly traded U.S. companies are registered, state representatives announced in summer 2018 that they plan to launch conceptual proof for a blockchain-based business filing system that will allow corporations to take advantage of smart contract technology for automatically tracking stocks and securing assets in real time. Previously, Delaware had signed a contract with IBM to develop an electronic distributed ledger based on the Hyperledger Fabric blockchain structure.

The Swedish land-ownership authority Lantmäteriet began testing blockchain technology in 2016 in cooperation with telecommunication company Telia, consulting firm Kairos Future and blockchain company Chromaway. As a result, a pilot project was presented to develop future real estate transactions by using smart contracts that aimed to significantly reduce the time it takes to sign contracts, register a deal and ultimately sell a property.

The project consists of three steps, with the first one being an experiment to demonstrate the technology’s potential. On March 30, 2017, the second stage ended with the release of a report that showed how the preparation of smart contracts automates the processes of cadastral operations.

To conclude a sale and purchase transaction, the buyer and seller do not need to use a notary. It is enough to provide digital signatures that are checked automatically. The third phase was to enable the actual transfer of land rights. On June 2018, developers completed the first successful transaction on the platform.

Swiss blockchain startup Proxeus joined with IBM Switzerland, Canton Zug and Swisscom in April 2018 to create the first register based on blockchain technology.

The project shows how a variety of parties, such as an entrepreneur, lawyer, bank, notary and commercial register can digitize their workflows through the use of IT systems integrated into banks and the commercial registry, which already exist with the Hyperledger blockchain and smart contract.

The project was a part of the Digitalswitzerland Challenge, a joint initiative of several leading Swiss companies aimed at stimulating the digitization efforts across the country and creating an alternative to the cumbersome process of registering a business in Switzerland.

In the fall of 2018, the National Land Registry of Great Britain — Her Majesty’s Land Registry (HMLR) — decided to use blockchain for maintaining land cadastre, announcing plans to digitize its data. The plan was called Digital Street and should take up to five years to complete.

The use of the technology should simplify the record-keeping process for ownership of land and real estate. The blockchain will protect this information, making it possible to avoid unnecessary bureaucracy. In April 2019, HMLR announced that the prototype blockchain was used to sell a house in Kent.

The process, which included the sale of the duplex in Gillingham, Kent, was designed to show how to buy and sell a house as easily and quickly as possible by demonstrating a digital transfer of ownership.

Transferring an existing real estate registry to the blockchain will mean that all the data on any property will be made available to interested parties, including a full list of past owners as well as the debts and persons registered to the property. The next step should be the transfer of sales contracts in the form of smart contracts, which cannot be changed retroactively.

The Federal Service for State Registration, Cadastre and Cartography (Rosreestr) was one of the first to register an equity agreement in this way in 2018. In the future, blockchain will be used in interactions between the Rosreestr with the Foundation for the Protection of the Rights of Participants in Shared Construction, where property developers pay insurance premiums.

The representative of Rosreestr explained that a larger project for recordinging all Moscow’s real estate transactions on a blockchain was also in the works, but is still being organized past its initial launch date of January 2019.

In March 2019, IBM and the National Council of French Commercial Court Secretaries announced the development of a corporate registry solution based on blockchain technology.

A blockchain network will be used by clerks working in commercial courts throughout France and will provide additional transparency and efficiency through improved management of legal transactions related to the life cycle of companies. The network also allows the sharing of a single version of the truth between court clerks and provides tracking of notifications related to changes in legislation.

In April 2017, the U.S. company Ubiquity LLC announced that it is collaborating with the land registrar offices of two Brazilian municipalities by recording land ownership information on the Bitcoin blockchain.

The company implemented this pilot project together with the Brazilian real estate registry Cartorio de Registro de Imoveis in the municipalities of Pelotas and Morro Redondo. According to project developers, the ongoing pilot program aims to move away from paper records to a 100% digital solution.