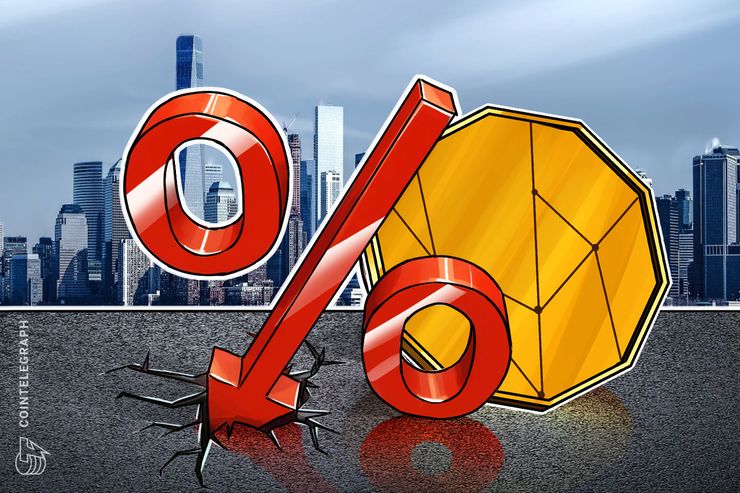 Crypto wealth management and lending company BlockFi has lowered the interest rates for their biggest cryptocurrency deposit accounts, according to an official blog post on March 22.

BlockFi launched the BlockFi Interest Accounts (BIA), cryptocurrency accounts supporting Ethereum (ETH) and Bitcoin (BTC), earlier in March. The accounts initially offered a 6.2 percent annual interest paid monthly in crypto. The company’s further analysis showed that almost 75 percent of the clients have a balance of less than 5 BTC or 150 ETH, while the median account balance is $7,000.

Per the recent announcement, balances of up to or including 25 BTC or 500 ETH will still earn the 6.2 percent annual percentage yield interest rate, while all balances over that limit will reportedly earn a 2 percent rate starting on April 1.

The company also announced that in April it will add a fiat withdrawal fee of 0.0025 BTC and 0.0015 ETH, although all withdrawals submitted prior to that will reportedly remain free. “These small adjustments are necessary to ensure that BIA can support as many clients as possible while maintaining the high quality services we provide to the average crypto consumer,” BlockFi explained.

Following its launch, BlockFi’s product faced a critical reaction from some industry players, specifically due to the company’s terms and conditions that allow it to determine the interest rate each month at its sole discretion, according to Bloomberg. David Silver, founder of the Silver Miller law firm, said:

“A superficial review of their splash page and their terms and conditions shows that their advertising is not necessarily what they’re guaranteeing [...] and it’s understandable why people would be confused if they didn’t receive their 6.2 percent because BlockFi’s advertising makes it seem like that’s a guaranteed rate of return.”

“We didn’t launch with a 6 percent rate with the intention of changing it one month later and pulling a big gotcha on everybody. That would be really bad business.”

Last May, trading and clearing platform LedgerX launched a new BTC savings product that is licensed by the United States Commodities Future Trading Commission. Rather than just “hodling” and hoping that Bitcoin appreciates, investors can purportedly earn a fiat-based yield on their BTC by employing what is referred to as a call overwrite technique, wherein an investor deposits BTC into LedgerX, then sells a call option at a slightly longer date, with a higher strike call option.