Central bank digital currencies continue to be a popular topic of discussion within the crypto and broader financial circle, with China often dominating the headlines owing to the progress of its planned digital yuan project. On June 22, a former central bank senior official revealed that the country had completed the backend infrastructure for its planned CBDC.

While China’s proposed digital currency electronic payment, or DCEP, system has been some time in the making, the emergence of Facebook’s Libra in 2019 reportedly triggered an accelerated developmental path. Indeed, Libra’s original plan for a token backed by a basket of fiat currencies saw stakeholders in several countries calling for their central banks to create their own CBDCs as a countermeasure. Several other countries are also announcing their intentions to develop their own sovereign digital “coins.”

For China, the DCEP joins an already vibrant electronic payment society where cash payments are reportedly rare. However, the digital yuan does offer several transferability and settlement features that separate it from staples such as WeChat Pay and Alipay.

On the international front, economic tensions between the United States and China are seeing pundits predict that Beijing may seek to push for greater adoption of its DCEP in cross-border transactions. An increase in yuan internationalization, especially among smaller economies, might see it challenging the dominance of the U.S. dollar in global trade.

China’s DCEP plan also comes amid growing interest in blockchain, with a raft of public-private partnerships aiming to leverage the novel technology. Major Chinese corporations such as Tencent and Alibaba are even investing billions of dollars in blockchain-related research and development in the hopes of controlling a larger market share in the developing digital economy.

Over 90% of people in major Chinese cities reportedly use electronic payment channels, with rural adoption almost reaching the 50% mark. Channels such as Alipay and WeChat Pay account for the bulk of these transactions as mobile-first avenues appear to be eroding the role of cash for most domestic retail spending. China’s largest paper currency denomination is the 100 yuan note, which is approximately $14. Given the relatively small dollar value of the country’s largest fiat denomination, purchasing high-value goods with cash can be cumbersome.

With cash having such drawbacks, card payments should, theoretically, automatically be the preferred transaction means. However, China’s strict economic policies mean processors such as Visa and MasterCard are not allowed to operate in the country. Instead, the country has its own card-based network called UnionPay, which has issued over 7 billion cards. However, the cost associated with maintaining card payment corridors has stifled broad-based merchant adoption in China. The need for card readers and the associated communication infrastructure has seen stakeholders in retail sales searching for another solution.

In recent times, mobile money seems to be satisfying this need in China, given the growth of the likes of Alipay and WeChat Pay. Both platforms have over 1 billion users, making electronic transfers the leading payment means in the country. 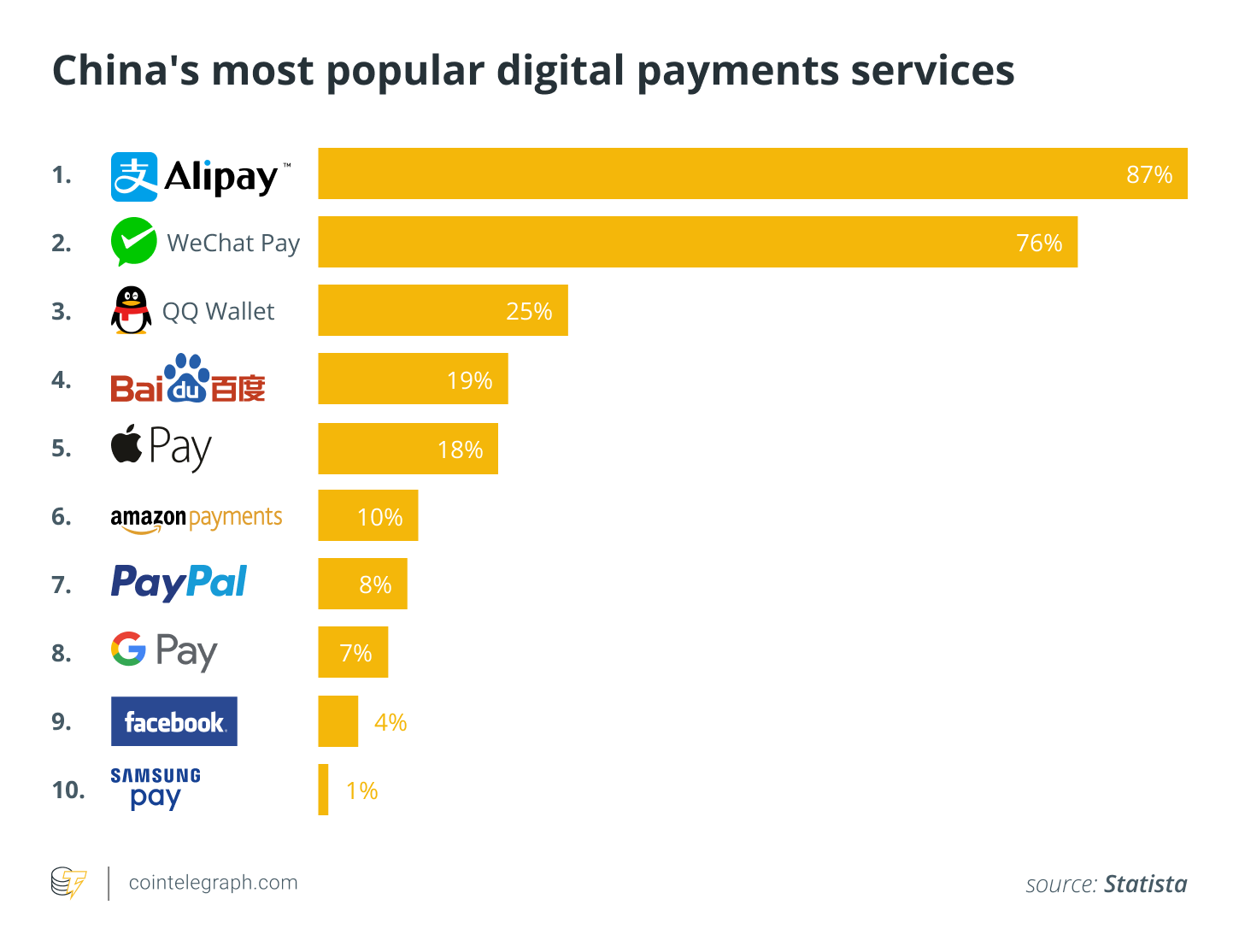 This pivot toward mobile money retail channels has come amid a huge surge in smartphone penetration both within and outside of China. Instead of card readers, merchants and shoppers need only interface with an electronic payment platform through a QR code to complete their transactions.

Merchants need not worry about data connection, as the paying customer uses their mobile data plan to enable the process. Indeed, QR codes solve the card reader problem for retailers and have contributed to making them the most popular electronic payment method in the country.

DCEP as a replacement for cash

Since 2019, the People’s Bank of China has been working on a universal barcode infrastructure for all QR code payment processors. This move simplifies the process for shop owners who may no longer need to display an array of codes for different payment options. However, it could also pose some challenges to the Alipay-WeChat Pay duopoly in China’s electronic payment arena. Smaller market participants such as Quick Pass — which is owned by Union Pay — may be able to chip away at the dominance of the two main players.

Amid this move toward a unified QR code system comes China’s planned CBDC. Taking the DCEP as a replacement for cash, the possible integration of the digital yuan within the country’s already mature electronic payment ecosystem remains an important question.

For Wayne Chen, the CEO of Interlapse and founder of crypto exchange platform Coincurve, Alipay and WeChat Pay will quickly integrate with the DCEP given the involvement of their parent companies in the development of the project. In an email to Cointelegraph, Chen remarked:

“While AliPay and WeChat dominate the electronic payment arena in China, they will likely move on supporting China’s CBDC especially when their respective parent company works with the government on other financial channels and services. That being said, I imagine the general public adoption and China’s CBDC roll out would take some time unless a more aggressive strategy is taken to propagate their DCEP into financial banks within China. Until then, China’s CBDC would co-exist with current payment channels within AliPay and WeChat.”

In May, videos emerged on Chinese social media showing some basic functionalities of the CBDC, including the ability to move funds from checking accounts to the DCEP wallet. China’s digital yuan project is currently undergoing several testing phases, with the likes of Starbucks and McDonald’s participating in pilot rollouts of the digital cash.

For Simon Li, a founding partner of Chain Capital — a blockchain accelerator firm — the digital yuan will act as a circulating liquidity provider for retail payments in China. In a conversation with Cointelegraph, Li opined that the DCEP is different from what’s already available:

“The biggest difference is that DCEP is endorsed by the government, which means it’s equivalent to fiat currency. Comparatively, the assets on Alipay and WeChat Pay are just a bookkeeping, based on commercial bank settlement and non-transferable between the two platforms. DCEP can circulate between supported banks and payment instruments.”

Building on the point that the DCEP is merely a digital replacement for cash, the introduction of China’s CBDC appears unlikely to cause any disruptions to the current electronic payment landscape in the country. Indeed, the digital yuan is expected to follow the PBoC’s two-tier model, as explained by Jeff Chu, a founding partner at BN Capital — a blockchain venture capital firm:

“It is operated within the current financial infrastructure, it only has limited impact on the current electronic payment area. The DCEP follows the traditional two-tier model, that is, the People’s Bank of China issues the DCEP and exchanges the traditional yuan for the DCEP to commercial banks or other financial institutions, and these institutions provide exchange-service for the public.”

Given China’s strict overwatch of its citizens’ financial dealings, the planned DCEP project has also come with speculation about how the digital yuan will impact the government’s monitoring of domestic and international yuan-denominated payments. For some pundits, the DCEP will be more of the same in terms of government supervision, as electronic payment channels in China comply with strict Know Your Customer requirements. The need for real-name identification has not affected the adoption of the system, likely indicating that citizens value ease of payment over privacy concerns.

From an adoption standpoint, the implicit trust being placed in these technology companies might offer a window into the likelihood of citizens readily utilizing the government’s DCEP system. Commenting on the possibility of increased government monitoring occasioned by the DCEP rollout affecting overall adoption, Chen remarked:

“Adding the blockchain element to the DCEP framework does bring another level of monitoring and supervision to the movement of the digital yuan. Currently, the government has a watchful eye on people and payments when they are using AliPay or WeChat, even when used overseas. So it may not be as foreign of a concept from an adoption perspective when it comes to the digital yuan.”

According to Li, the introduction of the DCEP will trigger significant changes in China’s credit structure, stating: “DCEP can effectively capture the flow of funds, set different liquidity prices for different capital demand parties, thereby incentivizing banks to return to the optimal state in the credit structure.”

Outside China, the digital yuan could contribute to the increase in yuan-denominated cross-border transactions, especially under the aegis of the $1 trillion “Belt and Road” initiative. Beginning in 2013, Beijing has been working on the details for a “New Silk Road” connecting close to 70 countries across four continents in an economic infrastructure development project that could alter the balance of power in global affairs. For Li, there is little doubt that China will seek a broad-based adoption of the DCEP in international markets, stating:

“China’s DCEP will be promoted to international market, which is an important step for China to promote RMB internationalization. The countries along the Belt and Road are using DCEP as a cross-border settlement tool to build an independent international settlement network centered on RMB.”

In recent years, China has begun to increase its economic interactions with emerging market countries, especially in Africa. This trend has seen the country overtake the U.S. as Africa’s largest trading partner. 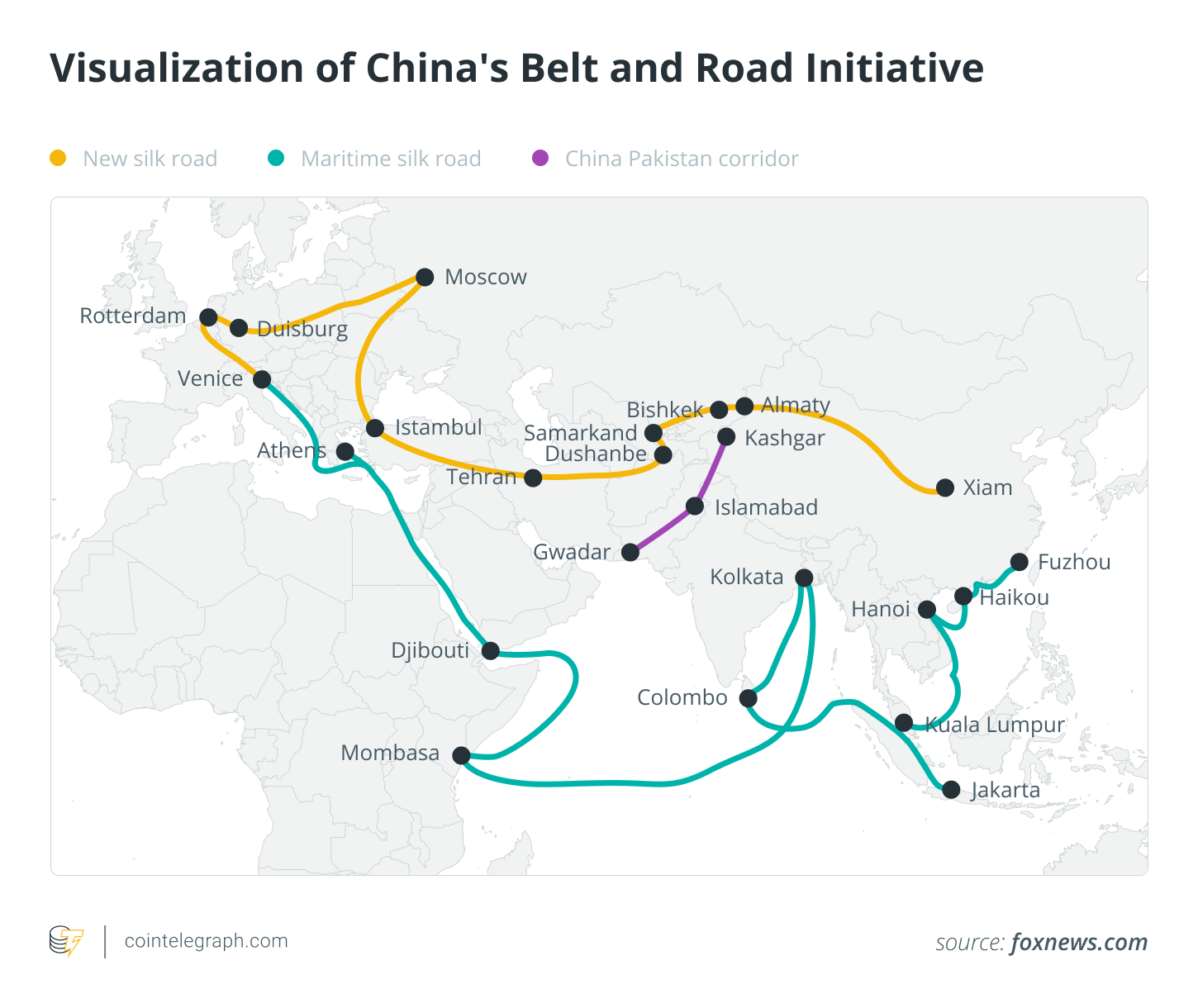 With Beijing reportedly being the single largest creditor to countries in Africa, China owns 20% of the total debt owed by governments on the continent as of 2018. An argument could be made that China could leverage this growing debt trap to nudge indebted nations into adopting the digital yuan.

The formation of a yuan bloc could pose a challenge to U.S. dollar hegemony in international trade. However, the current situation shows China’s fiat as only contributing to a minute percentage of international trade. According to data from Swift’s "RMB Tracker," the yuan only commanded a 1.79% share of international payments in May. This figure even represents a slight decrease from the numbers recorded in April.