Crypto exchange Coinbase has launched the 0x token on Coinbase Pro, it will be the first ERC-20 token supported on the platform.

ERC-20 tokens are tokens developed and used solely on the Ethereum (ETH) platform, where ERC stands for Ethereum Request for Comment, and 20 is the number assigned to this request. ERC-20 makes the creation of new tokens extremely easy, which is why ETH became popular with crowdfunding companies working on Initial Coin Offerings (ICOs).

Per the announcement, Coinbase has launched support for ZRX on its professional platform, Coinbase Pro, although trading will only be allowed once sufficient liquidity is established. The exchange notes that a separate announcement will be made when the token becomes available on coinbase.com and on its iOS and Android apps.

ZRX trading will be available in most jurisdictions, except the state of New York during its initial launch stage. Coinbase has divided the launch into four independent stages for each new trading pair; ZRX/USD, ZRX/EUR and ZRX/BTC, while the exchange notes that currently it will not offer trading on the ZRX/GBP pair.

As Coinbase states in the blog post, in the first, “transfer-only” stage, customers will be able to transfer ZRX into their Coinbase Pro accounts, without an option to place orders. The second “post-only” stage will let customers post limit orders, however with no matches. The subsequent stages — “limit-only” and “full-trading” — will enable matching limit orders and full trading services, including limit, market, and stop orders respectively.

In July, Coinbase announced its was considering adding five new assets — Cardano (ADA), Basic Attention Token (BAT), Stellar Lumens (XLM), Zcash (ZEC), and ZRX — to its trading list. The trading platform noted then that the new assets “will require additional exploratory work,” also warning that the listing process may make some coins available for customers to buy and sell only, without the ability to send or receive them using a local wallet.

Coinbase revealed its intention to add support for ERC-20 tokens in March, reversing previous statements from January. “After evaluating factors such as liquidity, price stability, and other market health metrics, we may choose to add any ERC-20 asset added to GDAX to the Coinbase platform,” the platform asserted.

At press time, ZRX is trading at around $0.76, up by 5.42 percent on the day, according to CoinMarketCap. On its weekly chart, the cryptocurrency price surged from $0.62 on Oct. 6 to $0.86 today following the Coinbase announcement. ZRX’s market capitalization is around $407 million, while its daily trading volume is around $67 million, at press time. 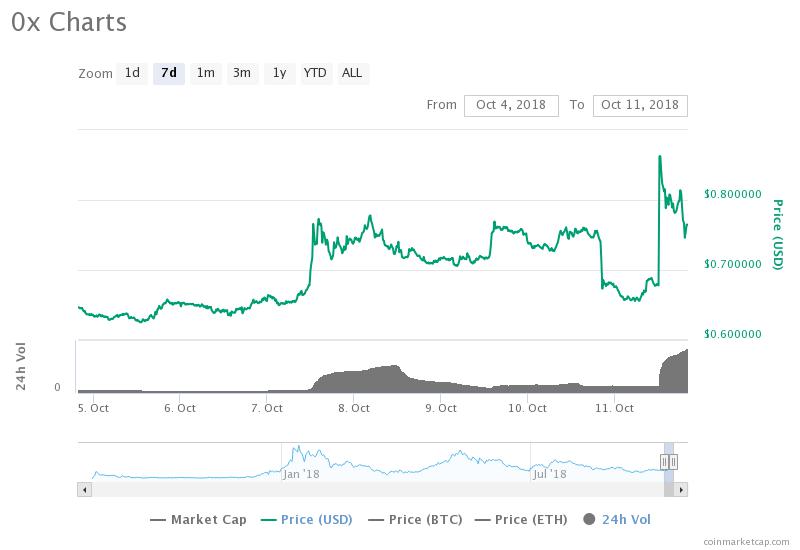