The total market capitalization of cryptocurrencies has increased past $800 bln on Jan. 7th, keeps growing.

The combined market capitalization of all cryptocurrencies hit $800 bln on Sunday, just days after reaching the previous all-time high of $700 bln. The number is at over $825 bln as of press time and keeps growing. Following a two-day period of sharp decline just before the New Year, the majority of cryptocurrencies are now growing again, contributing to the rapid increase in the combined market capitalization.

The latest all-time high comes just under a month after the market has achieved a total capitalization of $500 bln. This immense growth, coupled with the fact that 2017 started at a mere $18 bln combined, seems to indicate that cryptocurrency is well on its way to becoming a trillion-dollar industry.

Speaking of individual coins that are driving this upward dynamic, several are of note. Bitcoin, the original cryptocurrency, is hovering at a relatively stable price range between $16,500 and $17,000, with slight growth over the past week. However, the share of its capitalization against that of the market as a whole is still at all-time lows of around 34 percent, as major competitors seem to be outpacing it. 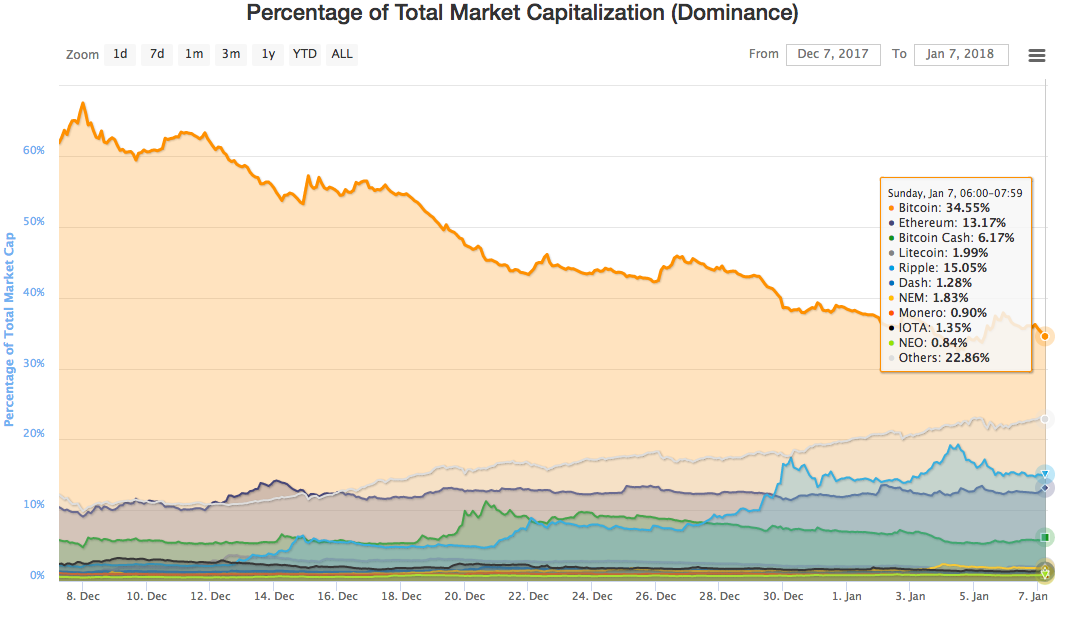 Ethereum, for example, has surpassed the $1,000 mark for the first time this Friday and keeps growing. Among the likely reasons for this dynamic is the immense level of adoption of the cryptocurrency, which seems to be higher than that of the rest of the market combined.

Ripple is another major producer of growth on the market. It started skyrocketing in mid-December 2017 and has already managed to displace Ethereum as the second-highest cryptocurrency by market capitalization, making its own chairman potentially the richest person on the planet in the process.

However, even if you disregard the major players, there are a lot of factors as to why the numbers are growing so fast. When even meme coins are reaching billion-dollar capitalizations, countries are issuing their own cryptocurrencies, and prominent tech CEOs like Thiel and Zuckerberg are eyeing the industry, a trillion-dollar combined market cap can easily seem a distinct possibility.