A number of successful crypto traders share their insights on how they ply their trade within the cutthroat industry...

Since Bitcoin (BTC) came into the world back in 2009, the digital asset industry as a whole has grown quite exponentially — with the market reaching its apex on the break of 2017-2018. Additionally, in the midst of all this, there has been a rise in the crypto trading sector, with the total capitalization of this domain currently pegged around the $277.90 billion mark.

In its most basic sense, cryptocurrency trading can be compared to forex trading because it allows enthusiasts to purchase digital assets using fiat currencies. Not only that, investors can also choose to make use of a number of strategies in order to increase their returns in the easiest manner possible. In this regard, one of the approaches that has garnered a lot of popularity over the past couple of years is that of investors using Twitter and Google trends data to predict the price movements of digital currencies such as Bitcoin, Ether (ETH), XRP, etc.

Related: Bitcoin Dominance Growing — What It Could Mean for Altcoins

On this very subject, The Southern Methodist University, Texas released a study back in 2018. In their report, the researchers were able to establish a clear correlation between the search activity of crypto enthusiasts in relation to BTC and ETH (on Google and Twitter) as well as their active trade values. For example, the report states that there is a link between the price of Bitcoin and the number of tweets associated with the flagship asset preceding a major price change. The researchers then go on to note:

“Both Google Trends and tweet volume were highly correlated with price. In addition, the correlation held during periods of increasing and decreasing prices suggest that the relationship is robust to periods of high variance and non-linearity. The findings of our analyses show that sentiment analysis is less effective for cryptocurrency price changes in an environment in which prices are falling. This is because tweets about cryptocurrencies  tend to be objective in nature (not having a clear sentiment) or positive regardless of price changes.”

With this information in mind, it is worth pointing out that there currently exists a plethora of tools that can be used to gauge the sentiment of the market in relation to the tweets associated with a particular crypto asset. For example, the Crypto Fear and Greed Index as well as CoinTrendz allow users to look at and analyze a number of indicators — such as market volatility, online surveys and social media tweets — to determine the direction in which the market at large (or even a particular currency) may be heading.

Below are the top cryptocurrencies searched on the day of publication. 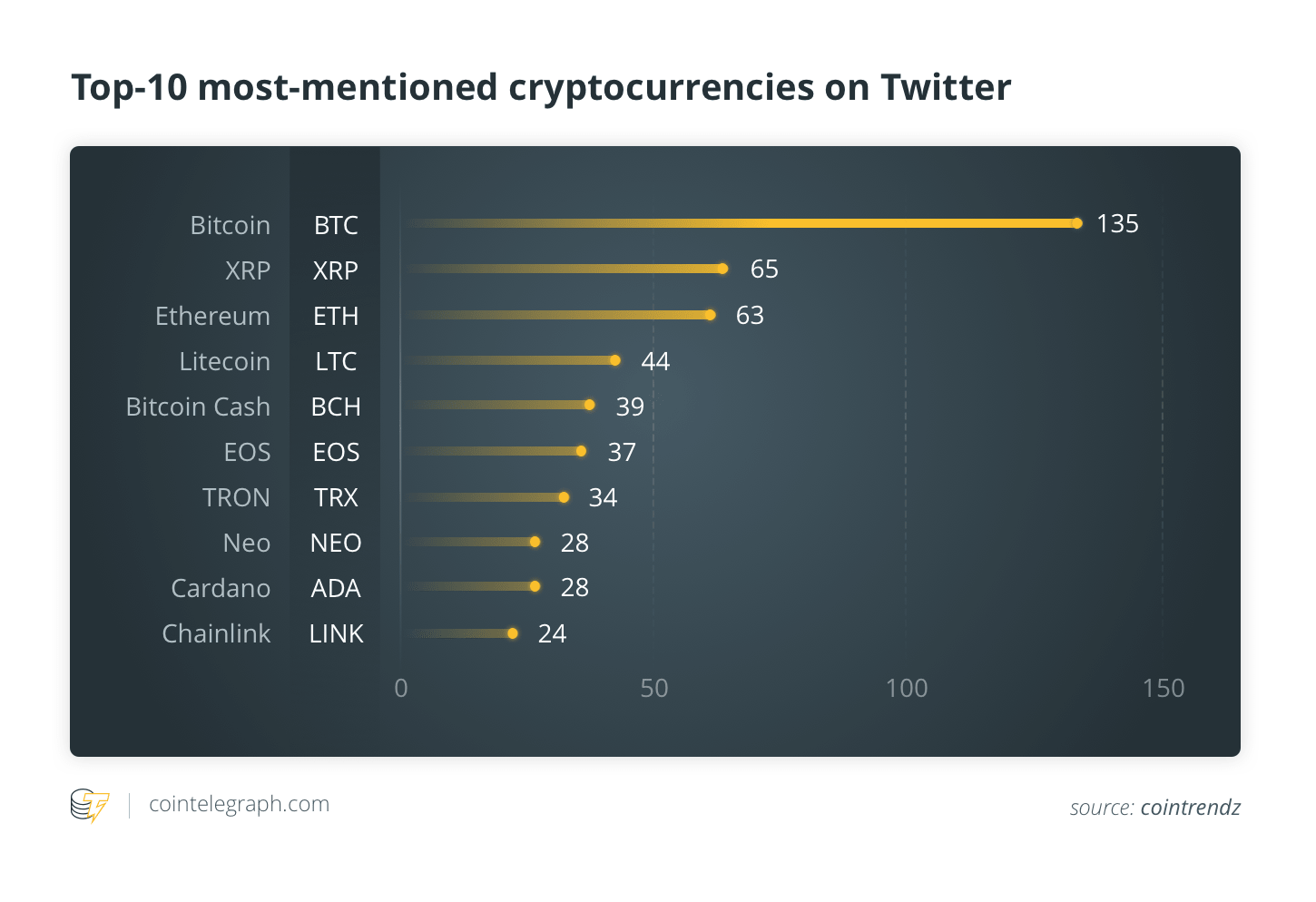 Rise of the social media brigade

Since 2015, there has been a massive increase in the number of autonomous analysts who have been providing investors with their insights as to how the future of the market may play out. To provide some perspective as to how popular these solo analysts really are, people like Dan Zanger and Mark Minervini currently have more than 90K followers on Twitter. Similarly, pseudonymous account holders such as CryptoYoda, Zissou and Mocho17 have more than 220K, 124K, 110K online followers respectively.

Cointelegraph got in touch with Bitcoin investor/trader Cryptomelette, whose trading track record so far has been stellar, according to his claims. This is because, at the start of the year, he supposedly had just 1.8 BTC that he then proceeded to grow to a whopping 105 BTC (approximately $1.2 million) using a vast array of investment techniques that he developed by observing a number of other traders.

As with various other famous crypto proponents, Cryptomelette first became interested in Bitcoin around 2013 — a period when the preeminent crypto was first starting to gain widespread media prominence. At the time, he says there were a lot of “unscrupulous people too eager to give their advice with no skin in the game.” However, after sifting through the sand for a few months, he started to follow analysts such as CryptoDonAlt, CryptoCred, VentureCoinist, CryptoTrooper and FilbFilb, who he believes still dole out excellent crypto investment advice. When asked about what drew him to these individuals, Cryptomelette stated:

“There are quite a few traders and commentators I follow and look up to but CryptoCred, VentureCoinist, FilbFilb come to mind as standouts — not only for their unique and insightful commentary on the market, but also their integrity, which is often in short supply in the crypto world. I never copy anyone blindly, and ultimately I make my own trading decisions which are often at odds with traders I respect.”

When asked about the strategies he used to turn over a profit he claims was more than 100 Bitcoins within a period of just six months, he said that his approach to trading was dynamic and that he was constantly tweaking his strategies by understanding the psychological dimensions of the game. He went on to say:

“Self mastery, emotional awareness, and the development of a proper attitude are all crucial. The paradoxical ability to be fluid, yet disciplined and systematic is something many traders struggle with and took me a while to fully grasp. The often heard mantra “strong opinions, weakly held”, captures this beautifully. Having patience has become something of a platitude, but it cannot be overstated. This area of my trading has vastly improved. Other aspects of my trading that have improved my bottom line are the ability to quickly and ruthlessly cut losers, to let winners run, and to focus on the larger time frames (thereby not getting shaken out of good entries due to low time frame noise).”

Adaptability and dynamism are essential to trading success

On the subject of continued success and how one can make a living playing the trading game, Cointelegraph also spoke with CryptoYoda — a Twitter analyst — who in no uncertain terms told us that, in order for a person to succeed in this field, he/she has to dedicate a lot of time and energy to learning the craft. The analyst said:

“Research what is it all about, understand why this technology is a global game changer. While you are researching that; find out why the current financial system that we have cannot come to a good end. The information is all out there, it just needs the commitment to dive into it. For those few who are ready, willing and able to dig through those vast amounts of information; you will have a glorious future.”

Some of CryptoYoda’s key tips designed to help budding day traders flourish in this field include:

Talking about the most common mistakes he made during the early part of his trading career, CryptoYoda was quick to note that the times he encountered the most financial uncertainty was when he failed to stick to his pre-devised plan of action. He said:

“Most common mistakes on my own journey were not sticking to my own analysis/trading plan and entering too early (I tend to be right on direction, but too early in timing). Knowing this alone however makes you observe these particular situations more carefully which in turn is profitable.”

So, what lies ahead for the crypto market?

Talking about direction, CryptoYoda believes that the best strategy moving forward is to patiently wait for the emergence of, what he describes as “global FOMO.” He is of the belief that, when BTC embarks on its next bull run, investors will be able to understand what digital scarcity really means — since everybody will be scampering to get their hands on even a fraction of a Bitcoin.

He also added that, with the legacy financial system facing a lot of stiff competition from emerging blockchain technologies, it is only a matter of time until people start to realize what is really happening and how it will impact their personal lives. According to CryptoYoda:

“For the people who are already invested in the space and for those no-coiners thinking about entering crypto for the first time; there could be not a more glorious time. Maybe you refused to buy BTC at 3k and saw it rallying up to 14k, but do not forget: if you missed this boat, there is another train departing soon... Coins other than BTC will have a great time in the future, especially when it comes to coins having anonymity features. Here once again is your chance to sniper the bottom, ride it to global fomo, then sell your bags if you have to. If you do it right, this is the only investment you would ever need to do, but only a few have the guts to actually go for it. That's the game and how it always has been.”

On the issue of future-proofness and how one can stay abreast with all of the latest events in the world of crypto, Cointelegraph also spoke with Nicola Duke (aka NicTrades) — an independent digital currency specialist who teaches her trading methods via her online Strategy Group. She believes that in order for a person to continually succeed in this field, they need to learn some definitive trend-following strategies so that when prices stop going up, one is sure to make some profit.

Nicola, who has more than 93K followers on Twitter, believes that, owing to the power of the internet, countless information pathways now exist that one can use to make informed investment decisions. She went on to say:

“I am not in any Telegram groups and have not tried any so I don't have an opinion. I think it's amazing what you can learn for free on the internet.”

The decisions are your own

To conclude, it bears mentioning that most successful day traders seem to be making use of a variety of techniques but specialize in one or two fundamental trading methods. For example. Christopher Inks, CEO and chief strategy officer of TexasWest Capital, said that he makes most of the business decisions based on volume and price action analysis via the Wyckoff Method. However, he also claimed that he frequently incorporates the Elliott Wave Theory to understand larger price movements, as well as supply/demand patterns, and pivots to narrow down price targets.

According to Inks, in order to succeed within this burgeoning space, it is essential that one find a mentor that can help you sift through all the noise and erroneous data that is currently out there. On the subject, Inks added:

“It’s difficult for new traders to discern between quality analysts and amateurs in this space because the amateurs are often so good at marketing an appearance of knowledge. They tend to give the new traders exactly what those new traders think they want rather than real, actionable analysis.”

The views and claims expressed in this article cannot be fully verified by Cointelegraph and do not necessarily reflect the views of the publication. The article is not endorsing the traders mentioned nor calls to follow their progress. Every investment and trading move involves risk. You should conduct your own research when making a decision.