Monday, September 10: crypto markets have seen mainly red today, with just two coins out of the top 20 cryptocurrencies in the green, and total market cap hovering around $194 billion.

Bitcoin (BTC) is slightly down today, fluctuating around the $6,300. The major cryptocurrency is currently trading at $6,287 by press time, down 1.5 percent over the past 24 hours.

Bitcoin saw an intraday high of $6,398 and low of $6,253, according to Cointelegraph’s Bitcoin Price Index. The coin sharply lost its $6,400 trading levels yesterday afternoon, slipping almost $200 in less than two hours, then sharply regaining some of those losses shortly after. 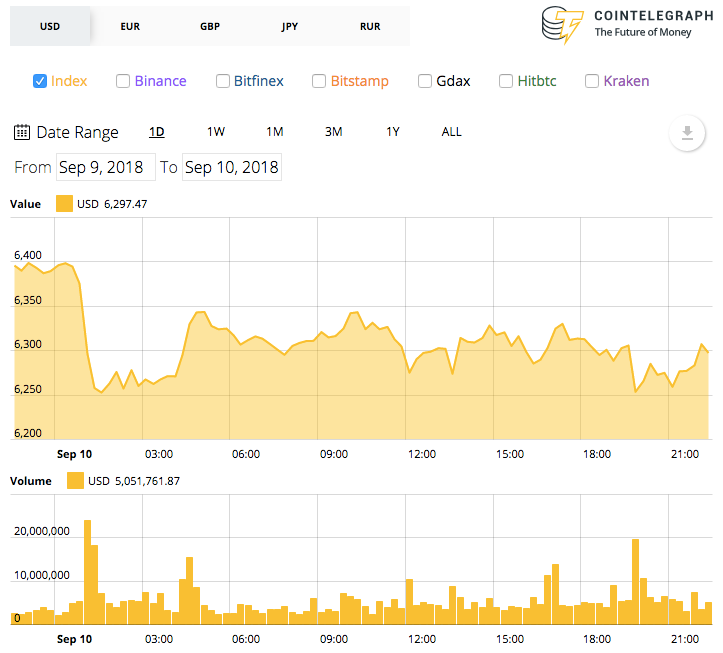 After also dropping and then testing a slight rebound yesterday, major altcoin Ethereum (ETH) has failed to hold the $200 point today. The coin dropped below $200 this weekend for first time since November 2017. 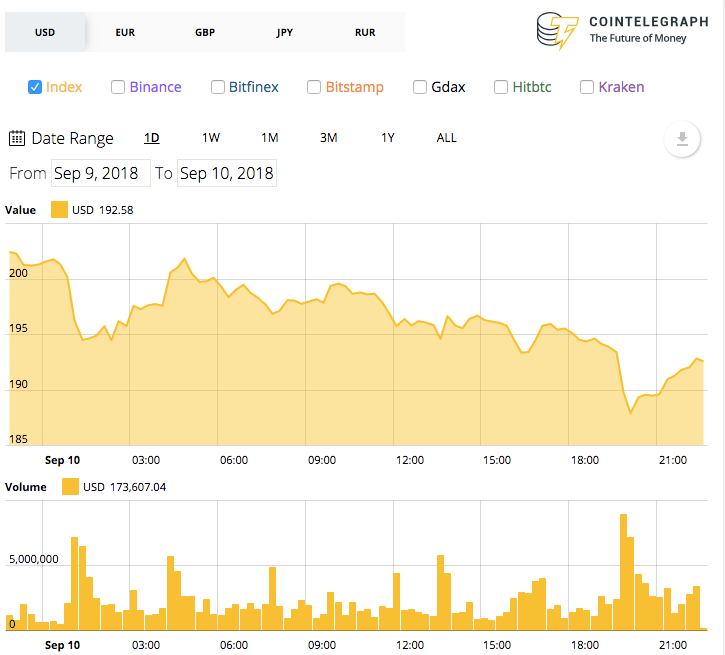 Total market cap has failed regain the $200 billion threshold over the day, falling below that point this weekend. At press time, the total market capitalization of all cryptocurrencies amounts to $194.5 billion.

As the overall market sheds billions, Bitcoin has again seen significant growth in dominance, currently taking the highest point of market share it’s seen over the past 30 days. At press time, Bitcoin dominance is just over 56 percent.

Dogecoin (DOGE), which recently pushed from 20th to 19th place by market cap, is again seeing notable growth. In a market where most coins are down by at least 3-4 percent, DOGE is up 13.6 percent over the 24 hours period.

Dash (DASH), ranked eleventh by market cap, is the only other top 20 coin in the green at press time. The altcoin is currently up 2.3 percent over the past 24 hours and trading at $201.

In contrast, Ripple (XRP), ranked 3rd, has suffered the biggest losses among the top 20 cryptocurrencies over the past day, having lost 6 percent to trade at $0.268 at press time. The coin is down over 20 percent over the past 7 days, according to CoinMarketCap.

Also yesterday, Ethereum co-founder Vitalik Buterin predicted that there is no chance that the cryptocurrency and blockchain space will see “1,000-times growth” again, stating that the industry is now reaching a “ceiling,” and is moving from “just people being interested” to the stage of “real applications of real economic activity.”

In more bullish news for the industry, the crypto industry today saw the launch of two new  stablecoins approved by New York regulators.

The Winklevoss brothers, who created crypto trading platform Gemini, received approval today from the New York Department of Financial Services (NYDFS) to launch their own USD-backed stablecoin, the Gemini dollar.