Stocks took a beating across the globe last week with the U.S. market getting hit the hardest. The S&P 500 Index dropped by 5.95%, its largest weekly loss in over two years. A culmination of factors seems to have spooked investors, all within the larger context of a shift towards higher interest rates.

The potential for a trade war was boosted as China announced retaliatory measures in response to the U.S. president’s plans to institute tariffs against the world’s second-largest economy.

According to China’s ambassador to the U.S. the response could include scaling back purchases of Treasuries, something global macro bears have been warning about for years.

Meanwhile, sentiment towards U.S. tech companies, which of course have global reach and have led the U.S. bull market, took a turn for the worst. Facebook is leading the sentiment shift as it tackles or fails to effectively address privacy issues that have recently come to light, depending on your point of view. The stock is down 18.6% off its record high of $195.32 from January, and its weakness is seen as a symptom of a shift in the stock market towards greater uncertainty.

The S&P 500 Index ended the week at a key potential support area defined by the confluence of the brown 200-day moving average (MA) and the 78.6% Fibonacci retracement line. Support could be seen here and if not it will give credence to the bear’s argument for a deeper correction. June 2016 was the last time that the index dropped below its 200-day, and it didn’t last long.

A bear trend continuation signal was generated last week in the FTSE Index as it fell below prior support of 7,062.10 with confidence, as the week ended in the bottom quarter of the range.  The 78.6% Fibonacci retracement area was reached, and short-term support could be seen leading to a bounce.

The German DAX Index is again testing support and looking like it just might break through it. Near-term support is from the most recent low of 11,830.98 and last week’s low of 11,818.70. A decisive drop below last week’s low will have the index next heading towards the confluence of support around the long-term uptrend line and 50% retracement line at 11,421.44.

If that doesn’t turn the descent, then the DAX is heading towards the confluence of the 61.8% Fibonacci retracement at 10,908 and prior resistance around 10,820.

Although five out of the eight cryptos tracked in the table below were higher for the week, it wasn’t by much. There were a number of key developments that seemed to impact investor sentiment in support of either a bullish or bearish outlook. Overall, on a technical basis, most cryptos remain in clear downtrends and are below their respective 200-day moving averages, as well as being below their downtrend lines. The exception is Litecoin, which is discussed in some detail below. 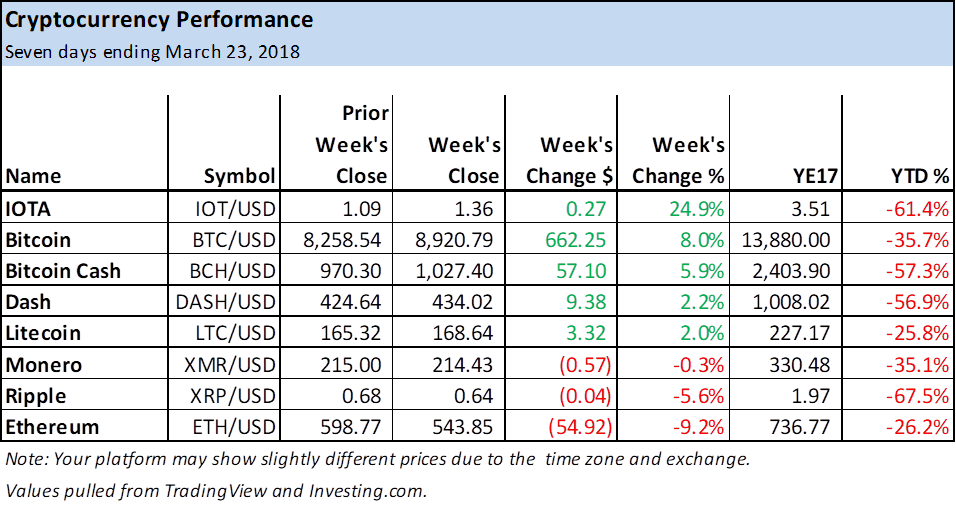 Nevertheless, good trading opportunities can occur on bounces given the high volatility levels seen in cryptos. We anticipate further strengthening this week following lows made one to two weeks ago depending on the coin.

On the bearish side, we saw Twitter announce plans to ban crypto advertising and join Facebook and Google’s previously announced plans to ban such ads. In other words, all three of the top online advertising venues will start blocking crypto related ads. Nevertheless, in the bigger picture, this should help screen out scams and fraud and will be good for the market as it will help build confidence.

In Japan, the Financial Services Agency issued a warning to the Binance Exchange, the largest exchange in the world by volume. Binance was originally located in Hong Kong then moved to Japan. It has been operating in Japan without a license, which is required. Now, following the warning, Binance has decided it wants to relocate to Malta. This announcement has caused some concern from crypto enthusiasts as there could be deeper problems hiding beneath the surface.

On the bullish side, there was some relief in the market following the G20 meeting last week in Argentina as they did not institute any particular clampdown on cryptocurrencies and instead suggested that tighter regulation would be needed at some point. This seems to postpone any further action by the G20 nations for the near-term.

Litecoin has been and continues to be in a stronger technical position relative to the other cryptos. As you can see in the chart below it is above both the long-term downtrend line and the 200-day moving average (brown line). It broke out above the downtrend line in mid-February and has since pulled back, in a relatively controlled low volatility manner, to test the line as support during the most recent pullback, low of $137.12. Support was strong though as it kicked in above the line at the 200-day MA. Note that support was also seen around the 200-day MA at the bottoms in February. This is all bullish price behavior that should lead to higher prices.

A breakout above the one-month downtrend line will trigger a new bullish signal, and the LTC/USD pair could then accelerate its advance. First, watch for a breakout to trigger on a move above $165.50. Strength is then confirmed on an enthusiastic rally above $175.50.

IOTA: the strongest performer of the week

A potential head and shoulders bottom pattern has formed in the chart of IOTA. It was the strongest performer last week, rising $0.27 or 24.9% to $1.36. As with all chart patterns, a breakout is needed to confirm the validity of the pattern before a trade signal is generated. In this case, a breakout occurs on a decisive move above 1.53.

The minimum target from the reversal pattern is approximately $2.03. Meanwhile, a drop below the bottom of the right shoulder at $1.24 changes the pattern structure and may lead to pattern failure.