G20 Hears Out Multiple Crypto Reports in July, Waiting for FATF to Test Its Standards by October

July’s data collecting deadline for the G20 has come, and they were greeted with a host of information from a number of different committees and commissions.

The G20, after it was called upon by France’s finance minister Bruno Le Maire to have a public debate about cryptocurrencies at the G20 Summit in Buenos Aires, made strides towards a global front for regulation of digital currencies.

Those strides could however be only considered baby steps as, at the conclusion of a meeting of the finance ministers in March it was decided that July would be the deadline for “very specific recommendations.”

The recommendations were not about what to regulate, but rather, what data is needed.

Now, with the July deadline come and gone, the G20 has reiterated its March commitments, but has also decided to move to a new deadline of October where it will await the Financial Action Task Force (FATF) clarification on how its standards apply to what it calls crypto-assets.

The path to taking crypto seriously

The speculation and hyper growth that saw Bitcoin easily smash through the $10,000 barrier through November 2017 certainly caught the eye of investors, but it also brought the decentralized and anonymous digital currency into the spotlight of global regulators.

The French finance minister’s suggestion that cryptocurrencies be part of the G20 talks in Argentina coincided with the peak of Bitcoin’s price high.

When commenting on the G20 nations taking up the topic of Bitcoin, Bruno Le Maire indicated a certain nervous attitude toward the skyrocketing asset.

“I am going to propose to the next G20 president, Argentina, that at the G20 summit in April we have a discussion all together on the question of Bitcoin. There is evidently a risk of speculation. We need to consider and examine this and see how with all the other G20 members, we can regulate Bitcoin.”

However, even before the Bitcoin boom, there were attempts by cryptocurrency groups to try to catch the attention of important governmental summits, and to be part of important global economic discussions.

For example, in November 2014, the Australian Digital Currency Association (ADCCA) purposefully scheduled their own event to overlap with the G20 in Brisbane Australia.

Ron Tucker, ADCCA Chairman, explained the reason behind the move in 2014:

"With Australia chairing the G20 this year, there is no better time to engage with relevant stakeholders to make sure the digital currency industry can continue to grow and prosper at home and globally."

While it is hard to track the effectiveness of this move, it could have helped the ADCCA create a partnership with Deloitte in 2015. Australia now could be regarded as a strongly, but fairly, regulated cryptocurrency continent.

Before the G20 were gearing up to discuss the potential risks and dangers of Bitcoin to global financial stability, they were already looking into the potential benefits of the underlying technology.

In March 2017, a statement from Julie Maupin of the Centre for International Governance Innovation detailed the need for a joint effort to “fight to restore the public’s faith in cross-border economic cooperation.” This included a decisive look at blockchain technology as a potential solution.

At this stage, though, there were merely whispers and suggestions about the potential of blockchain technology; there were no concrete plans to work with such disruptive fintech. In fact, a Deloitte report from around the same time suggested that world governments were not ready.

No longer ignored, no longer a threat

After Bitcoin was tabled as a topic of discussion for the finance ministers, the cryptocurrency world watched which direction the leaders of such powerful nations would go in relation to the new financial technology.

The first indications the discussions may be positive for cryptocurrencies came as Bank of England governor and head of the Financial Stability Board (FSB) Mark Carney told G20 members that crypto assets “do not pose risks” to the world’s economy. This saw Bitcoin’s price jump $1,000.

“Whether you call it crypto assets, crypto tokens – definitely not cryptocurrencies – let that be clear a message as far as I’m concerned.”

This definition from Klaas Knot, president of De Nederlandsche Bank NV, who also chairs the FSB standard committee on the assessment of vulnerabilities, positioned Bitcoin in a way in which it would not be as harshly regulated if it was considered money.

The conclusion on the March meeting for the G20 financial leaders saw them decided to give it some time before instituting anything specific.

"In July we have to offer very concrete, very specific recommendations on not 'what do we regulate?' but 'what is the data we need?'”

So, with July being the decided upon deadline by the G20 to offer specific recommendations on what data is needed for the regulation of cryptocurrencies they looked to commissions and committees to supply information.

Thus, they called upon a number of different bodies, as the Financial Stability Board (FSB), the Committee on Payments and Market Infrastructures (CPMI), International Organisation of Securities Commissions (IOSCO), Basel Committee on Banking Supervision (BCBS) and the Financial Action Task Force (FATF), to report back.

In July the FATF came back with a report, but the G20 decided to set a new October deadline. According to a communiqué, the G20 waited to see how the FATF can apply its standards to cryptocurrencies.

Meanwhile, a report from the FSB was also received outlining the work it had done with the other standard-setting bodies. Different commissions and committees provided a deeper explanation how crypto assets would impact the global economy.

IOSCO’s work was focused on addressing the regulatory risks of initial coin offerings and crypto-asset platforms.

Finally, the CPMI was monitoring the development of digital currencies and distributed ledger technology from the perspective of the safety and efficiency of payments and settlements, cautioning banks which are thinking of launching their own central bank digital currency (CBDC).

Meanwhile, the FSB itself was involved in conducting an initial assessment of the risks posed to financial stability by the growth of crypto-assets.

“The objective of the framework is to identify any emerging financial stability concerns in a timely manner. To this end, it includes risk metrics that are most likely to highlight such risks, using data from public sources where available.

“The FSB selected metrics for the monitoring framework based upon several criteria, including comparability over time and across jurisdictions, ease of access and repeatability, degree to which the metric is anchored in data, and analytical effort to compute.”

Essentially, the FSB has been monitoring the closing price and market capitalization, the price volatility and the monthly average of daily transactions. These can be seen as graphs within the report. 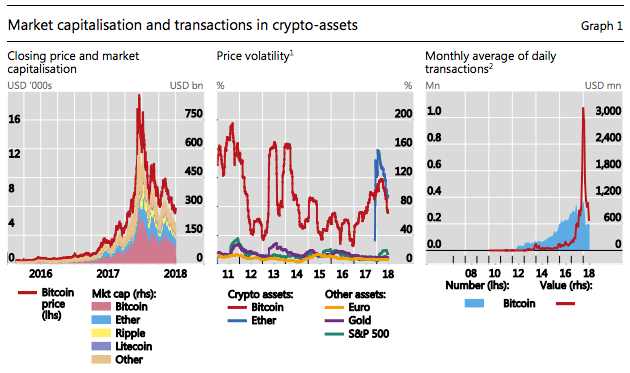 Classification of crypto-assets and exchanges

The IOSCO’s work on monitoring ICOs and exchanges has brought up the following:

“First, issues like whether a traded crypto-asset is a security, commodity, or some other financial product, or the manner in which such platforms operate, are threshold questions in the context of financial regulation.

“Finally, existing regulatory models may rely on access through a regulated entity to support many investor protection and other regulatory objectives, such as surveillance, but access to crypto-asset platforms currently may not involve such regulated entities.”

Also the Securities and Exchange Commission (SEC) in the USA is forging forward with its definition of what a security is, painting many ICOs as securities.

Additionally, the way in which exchanges are being run is a point of high contention, especially in places like Japan and South Korea. The former has taken it upon itself to issue business improvement orders to a number of exchanges, while the latter has classed them as legal entities which fall under banking legislation.

The FATF, with its mandate from the G20 to develop a program to implement standards preventing money laundering and terrorist financing through crypto-assets, has released its working program which will come into force from July 1, 2018 until June 30, 2019.

“Under the US presidency, FATF will prioritise work on preventing the financing of the proliferation of weapons of mass destruction; expand the current emphasis on combating terrorist financing and foster improvements in the regulation and supervision of virtual currencies/crypto-assets.”

The FATF also looked into the different G20 nations and their regulatory needs and approaches.

With October being set as the next point in which the G20 will come together to take further steps toward global cryptocurrency regulation, it is interesting to see how much the cryptocurrency space will have evolved in this time.

The wording of the document announcing this decision gives an impression of a balanced approach to cryptocurrencies as they currently stand:

“Technological innovations, including those underlying crypto-assets, can deliver significant benefits to the financial system and the broader economy.”

However, there is a caveat suggesting other concerns surrounding crypto’s use for tax evasion and money laundering which will hopefully be further addressed and explored with the FATFs program.

It signed off by stating:

“We reiterate our March commitments related to the implementation of the FATF standards and we ask the FATF to clarify in October how its standards apply to crypto-assets.”