How Crypto Gambling Is Regulated Around the World

Countries around the world take varying approaches to the crypto gambling and betting, with Japan perhaps having the most defined stance.

11152 Total views
142 Total shares
Listen to article
0:00
Analysis
Own this piece of history

“Although it is very difficult to restrict players who play, the government keeps a close tab on crypto transactions originating from Japan using taxation as an excuse.”

Yet, Japan passed a federal law in July 2018 that allows physical casinos in the country: “Japan is opening up its offline casino license to major players after next year’s Olympics,” Hugh pointed out, “It is uncertain who will receive licenses for Tokyo, Osaka, Okinawa and Hokkaido. We believe online casinos will follow only after offline casinos start operation.”

Japan’s approval of “integrated resorts” has yet to be felt by the cryptocurrency industry. An integrated resort is a comprehensive entertainment complex with casinos, shopping malls, theaters, hotels and theme parks. While Prime Minister Shinzo Abe has introduced such pro-casino legislation as part of his overall growth strategy, Japan has not been so welcoming of crypto gambling.

Cryptocurrency gambling in Japan isn’t as prevalent as one would think given the country’s track record of implementing cryptocurrency regulations early, which is perhaps due to its experience with the collapse of Mt. Gox, a Japanese-based crypto exchange that went bankrupt in 2014.

Early in 2019, Blockchain network Tron, which claims to be building the infrastructure for a truly decentralized internet, blocked gambling apps on its decentralized app (dapp) store in Japan following pressure from Japanese regulators.

Tron proactively blocking access to certain dapps led Tron’s Chief Technology Office (CTO) and co-founder Lucien Chen to leave the team. He cited the inconsistency between Tron’s dedication to being decentralized and its actions, which Chen said were more inherent to those of a centralized entity.

How does cryptocurrency gambling work?

Blockchain-based gambling, for the most part, takes place in two ways: on-chain and off-chain.

These establishments will often use a third-party custodian, such as BitPay, to convert Bitcoin or another cryptocurrency to a local fiat currency. There are online casinos that purely operate without fiat denominations, though, and pay out in Bitcoin.

It is much easier for governments to go after off-chain casinos. Crypto gambling website casinos often ban IP addresses, preventing access from certain countries. When attempting to use on Bitcoin-accepting gaming sites from within the United States, the users will most likely be blocked. 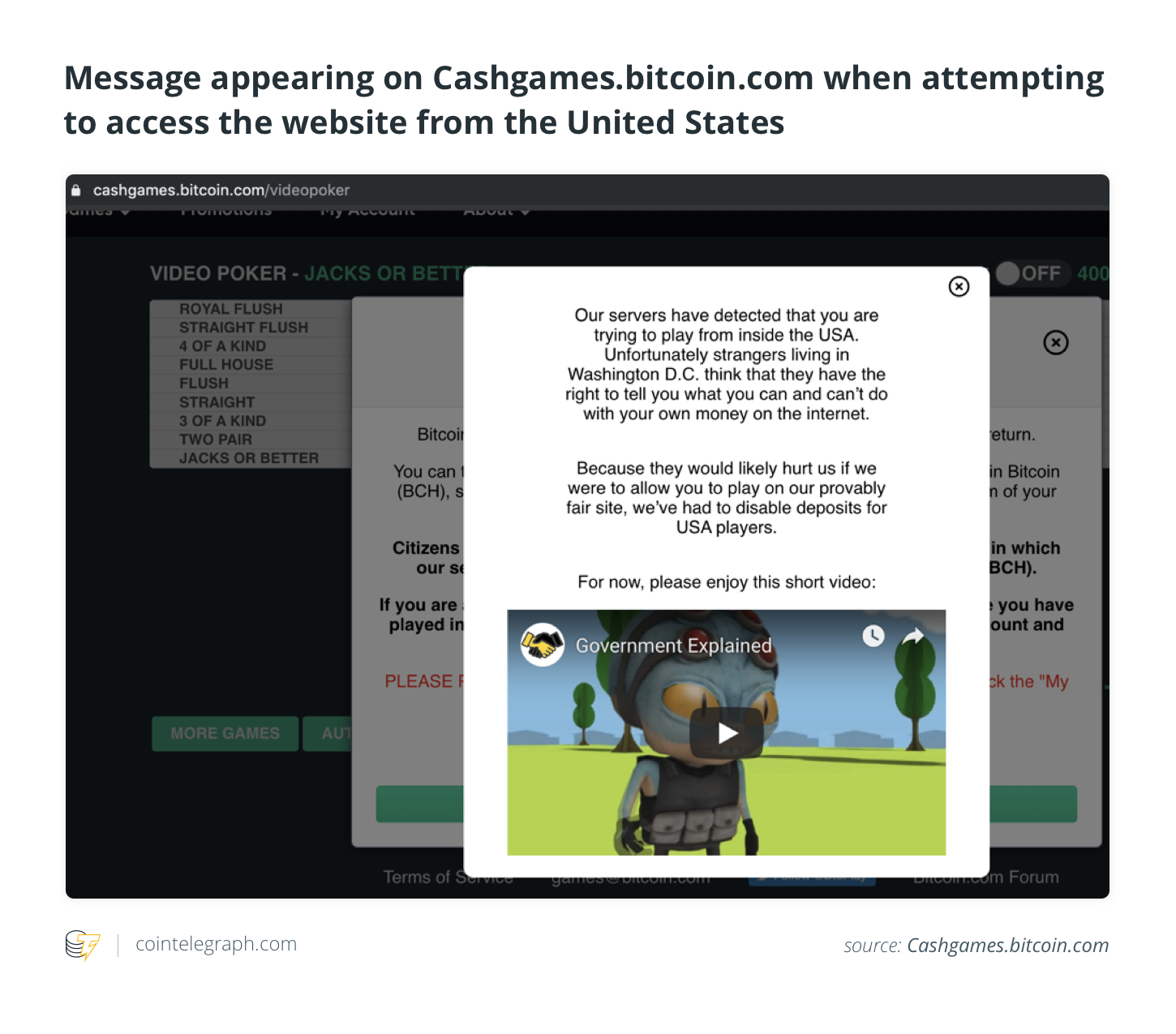 On-chain casinos and other more decentralized or distributed methods of online gambling are not entirely immune to the effects of government regulation either, as we’ve seen with Tron’s refusal to show gambling dapps to Japanese users, as reported by Cointelegraph. Japanese internet users, however, can use a VPN to access Tron’s gambling dapps or blocked dapps from anywhere. Cryptocurrency gambling indeed remains a topic of hot debate in Japan. Nevertheless, no official guidelines have been put into place yet.

While most countries have official regulations in place regarding online gambling, only a handful of nations regulate crypto gambling.They include the United Kingdom, Italy, The Netherlands, Greece, Poland and Belgium.

In many countries, Bitcoin is not considered a legal payment method under existing guidelines, so therefore shouldn’t be used in gambling. More clarity on that matter is evidently needed in various countries. Japan is perhaps the most notable example, where the gambling industry exceeds that of Nevada by over $4 billion and is estimated to be $15.8 billion. 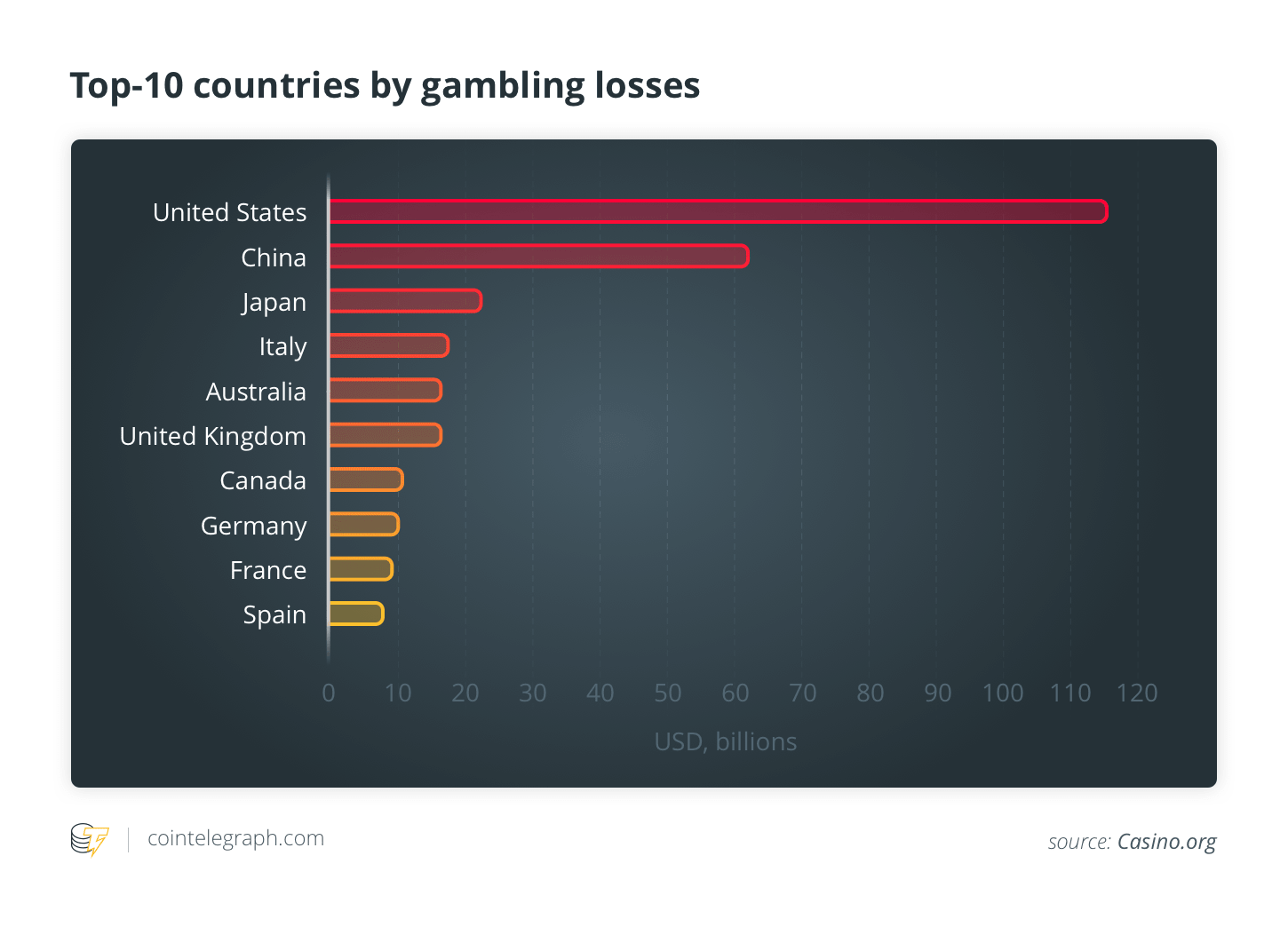 In the U.K., numerous online gambling platforms and service providers accept cryptocurrency. Cryptocurrency-oriented service providers must adhere to the existing gambling laws active in the United Kingdom. There, sports betting is an extremely popular activity, having grown into a 700-million-GBP industry. Several crypto-focused sports betting websites can also be found online.

While the U.K. Gambling Commission allows Bitcoin gambling, it also issued a warning on its website against untrustworthy service providers. Users are advised to “be cautious when using Bitcoin due to the associated risks.”

Yet, the benefits provided to gamblers by cryptocurrencies cannot be overlooked. Bitcoin provides a degree of privacy, though not anonymity. No personal information is transmitted when conducting a Bitcoin transaction, but a person attempting to convert BTC to fiat must be identified in most countries through know your customer (KYC) and anti-money laundering procedures (AML).

On the other hand, privacy coins such as Monero (XMR) and Zcash (ZEC) give their users a greater amount of identity protection and, although less widely-accepted than Bitcoin, are known to be an impediment to law enforcement’s investigative abilities. Joseph Hugh believes that tighter crypto regulations will help those using the digital currency for legal purposes:

“It is the role of all governments to try to regulate any and all financial activities of its citizens and nobody can blame them except for people who are in the grey and fishy businesses. I strongly believe that dapps are here to stay as country boundaries cannot stop people from getting around to them eventually.”

Despite the numerous regulatory and technical challenges faced by successful adoption in casinos, the world’s gambling industry is becoming increasingly friendly to cryptocurrency. Online casinos and even well-known Las Vegas establishments are starting to accept Bitcoin and other cryptocurrencies, which is a trend that we will likely continue seeing in the future.