In an Uneven Market, Most Cryptos Seal Further Growth, Some Alts See Corrections

Markets are today seeing strong momentum — both positive and negative — with a majority of crypto assets firmly in the green.

Sunday, September 2: crypto markets are today seeing strong momentum — both positive and negative —with a majority of crypto assets firmly in the green, while some large-market-cap alts have posted corrections, as Coin360 data shows. 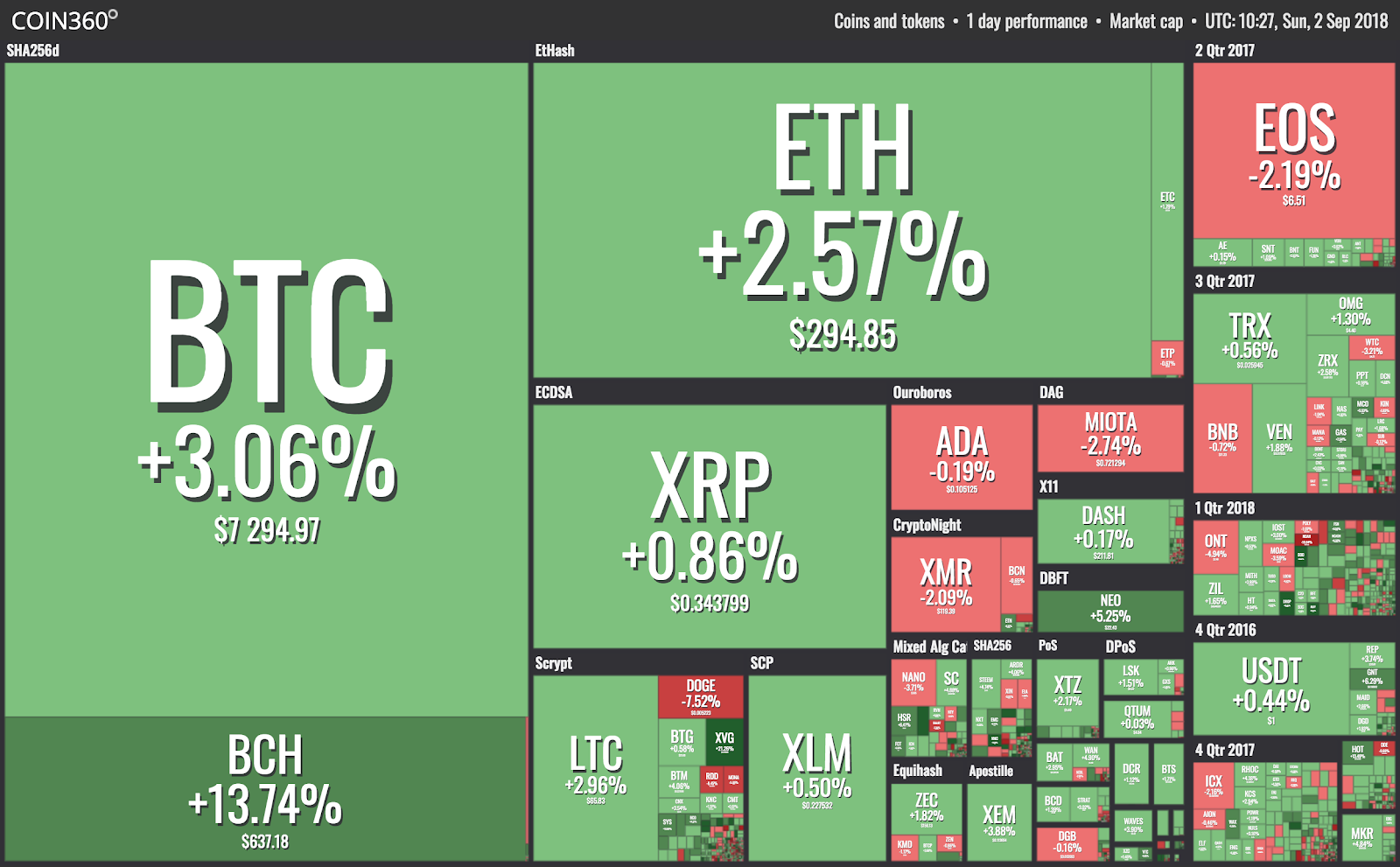 Bitcoin (BTC) is trading at around $7,244 at press time, up around 2.4 percent on the day, according to CoinMarketCap.

Having bullishly broken through the $7,000 threshold earlier this week, the top coin began to dip August 29, trading as low as $6,827 by August 30. Since then, the asset has been on a jagged but strong ascent, and is today trading over $400 above its late-August low, and a strong $580 above its lows at the start of its weekly chart. 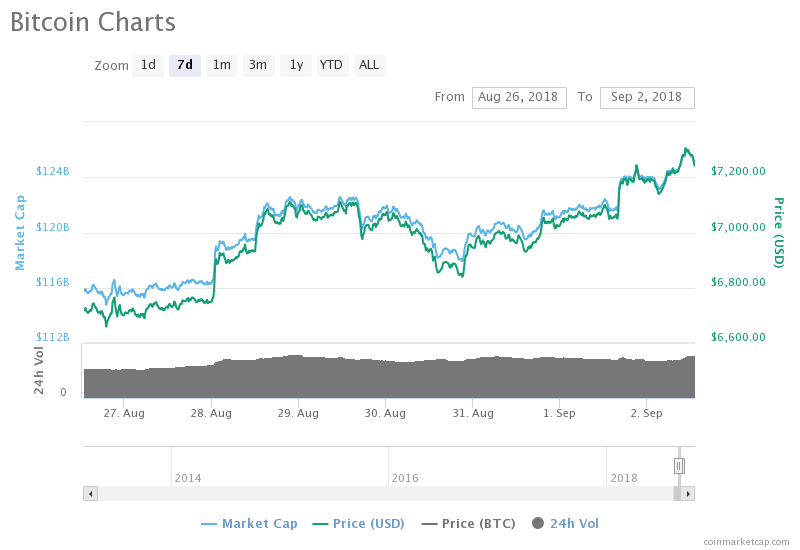 On the week, Bitcoin is up a solid 8.76 percent, and has closed its monthly losses to around 4.6 percent, according to data from CoinMarketCap.

Ethereum (ETH) is trading around $292 at press time, seeing a 2 percent gain on the day, according to CoinMarketCap. After a volatile week, the top altcoin has today come tantalizingly close to reclaiming the $300 price point — soaring to an intraday high of around $299.52, before dipping slightly in the hours before press time.

This week’s reports that the Chicago Board Options Exchange (CBOE) plans to launch ETH futures by the end of 2018 did not immediately impact the asset’s price, although positive market momentum has since boosted its growth over the past couple of days. On its weekly chart, Ethereum is up a solid 5.8 percent, with monthly losses now at 29.8 percent. 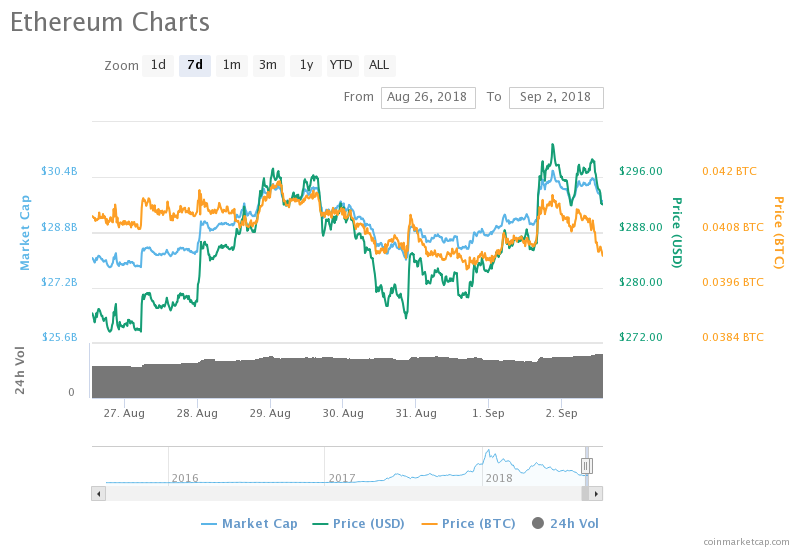 The top ten coins listed on CoinMarketCap are a mixed bag. Six are in the green, seeing mostly minor gains with the exception of Bitcoin Cash (BCH), which has soared 12 percent on the day to trade around $629 at press time. After a stagnant week circling the $560 range, BCH has seen a boost in price performance following its stress test yesterday, September 1. 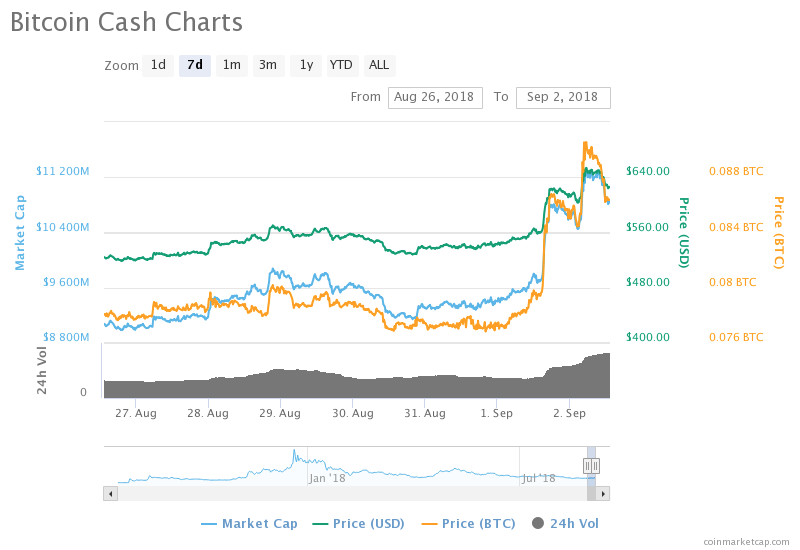 Among the top twenty coins, mixed fortunes continue, with Monero (XMR), DASH and Tron (TRX) all in the red, but with losses capped within a 2 percent range. The strongest performer is NEO, up a bullish 3.8 percent on the day to trade at around $22.15 at press time. NEM is up around 3 percent and is trading at $0.11.

Dogecoin (DOGE) has today seen a hefty correction, losing around 19.6 percent on the day to trade at $0.004 at press time. After seeing a major upswing kick in August 30, the altcoin shot up 40 percent just yesterday. Crypto commentators have attributed DOGE’s eye-popping price performance to an impending infrastructure development for a project dubbed Dogethereum, the demo for which is set to take place Sept. 5. 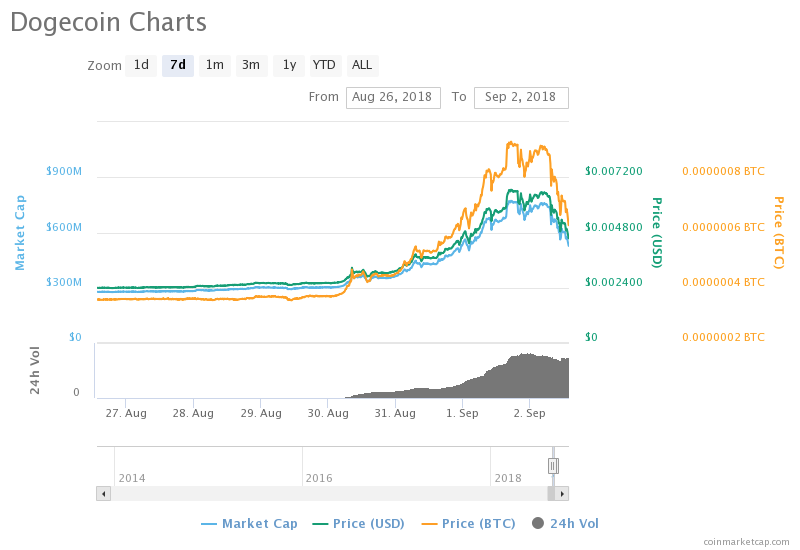 Total market capitalization of all cryptocurrencies is around $236.4 billion at press time, up almost $21 billion on its weekly chart. 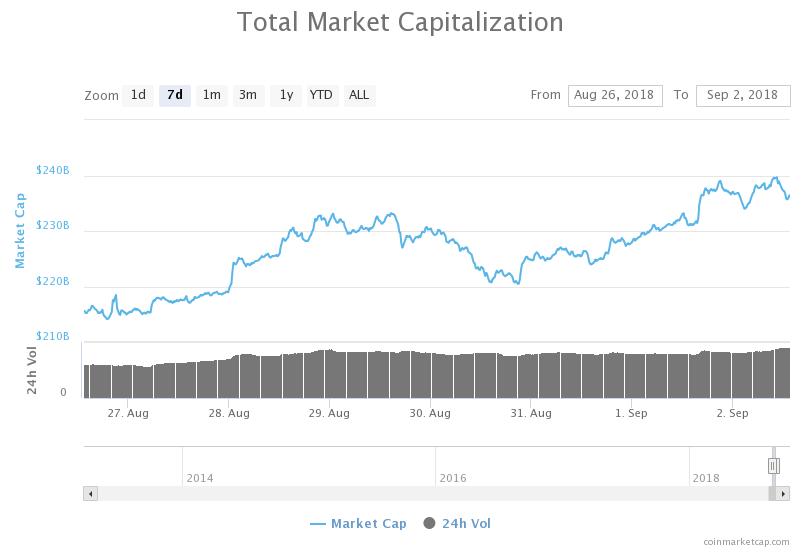