The top cryptocurrencies are gradually rolling back after a recent short recovery.

Sunday, Feb. 10 — while Bitcoin (BTC) is managing to stay above the $3,600 price point for the third day in a row, other major cryptocurrencies are mostly in the red as the markets gradually roll back after short recovery, Coin360 data shows. 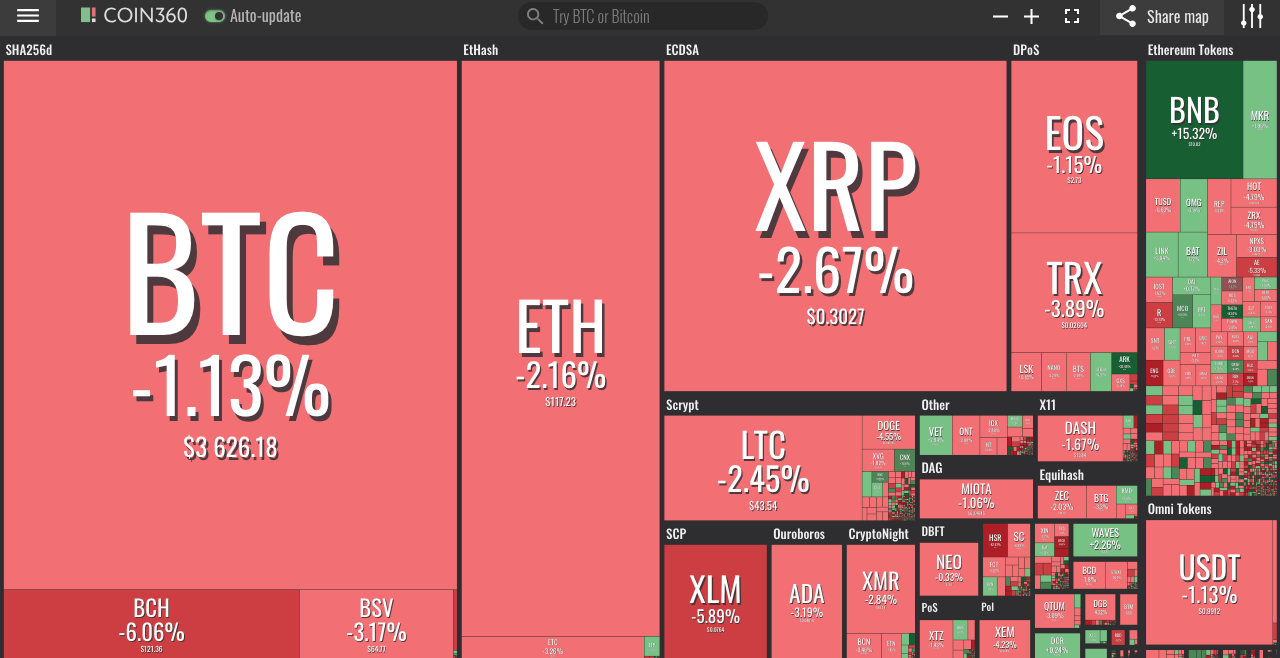 BTC has been trading sideways during the last 24 hours, but the coin is still above over its psychological threshold of $3,600 at press time. As Cointelegraph previously reported, the top currency gained over $200 in value on Friday, Feb. 8, hitting $3,691 at some point during that day.

Also this week, BTC daily transaction volume almost reached levels it had not seen since January 2018, when world’s top cryptocurrency was worth close to $20,000. 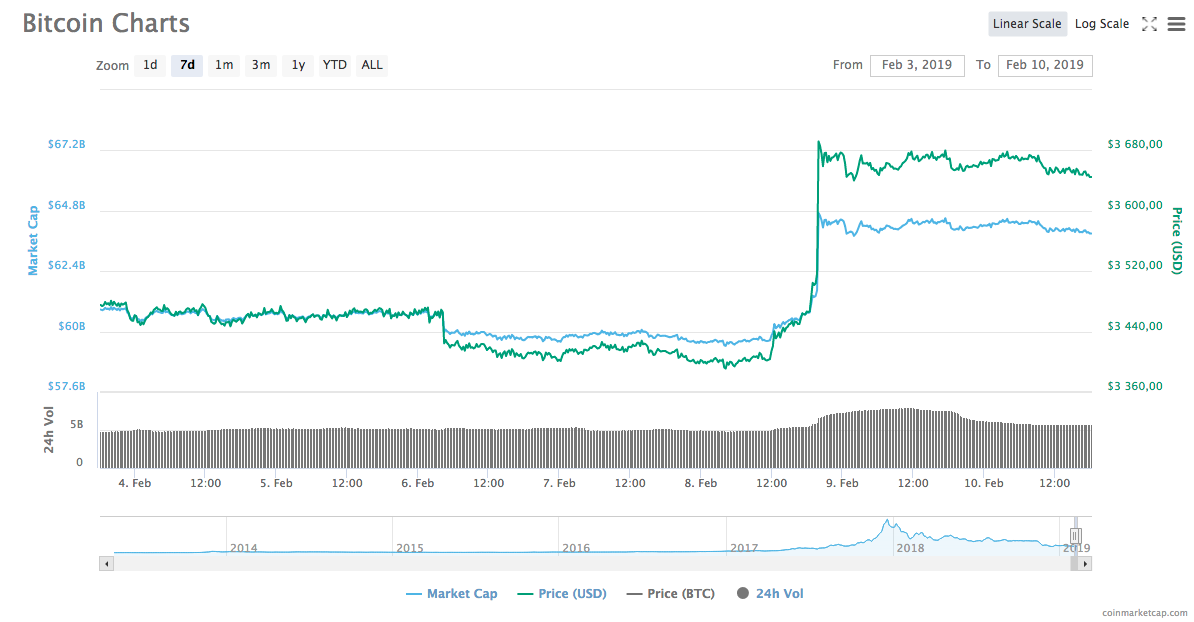 Ripple (XRP) — currently the world’s second-largest cryptocurrency — has seen almost a 3 percent decline and is now trading around $0.3. Its market capitalization has shrunk in last 24 hours to a total of $12.5 billion in comparison to yesterday’s $12.7 billion. 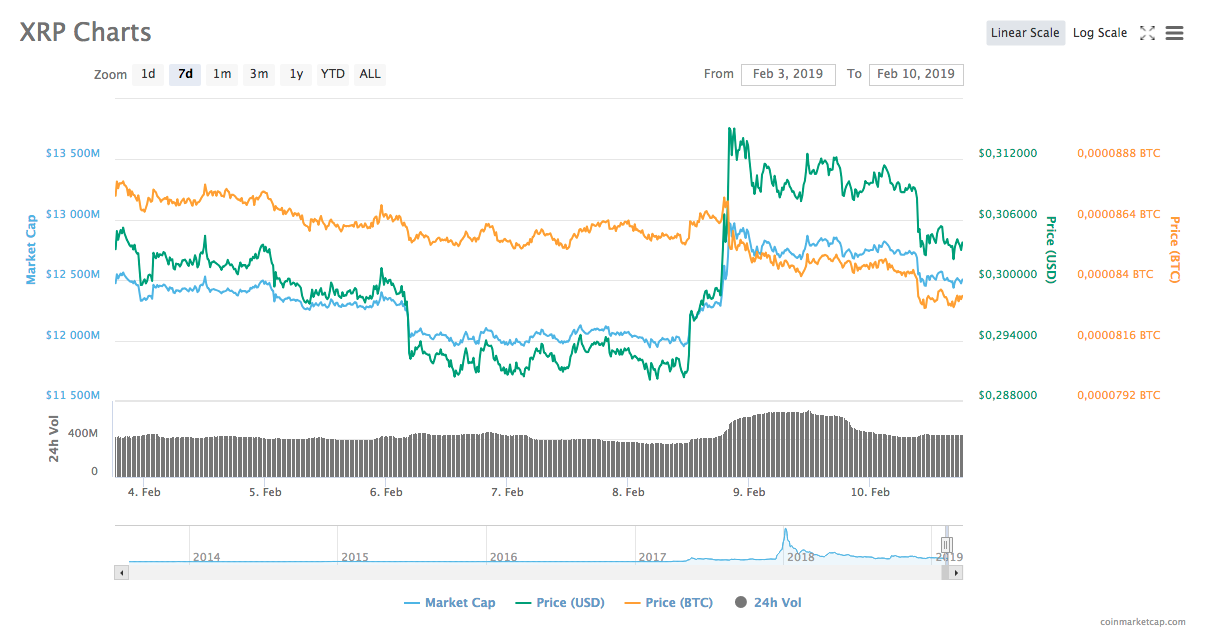 However, XRP still surpasses Ethereum (ETH), the next largest crypto, by market cap. ETH has also lost over 2 percent in price throughout the day and is hovering around $115. Its market cap is now around $12.3 billion after reaching $12.5 billion at some point on Saturday, Feb. 9. 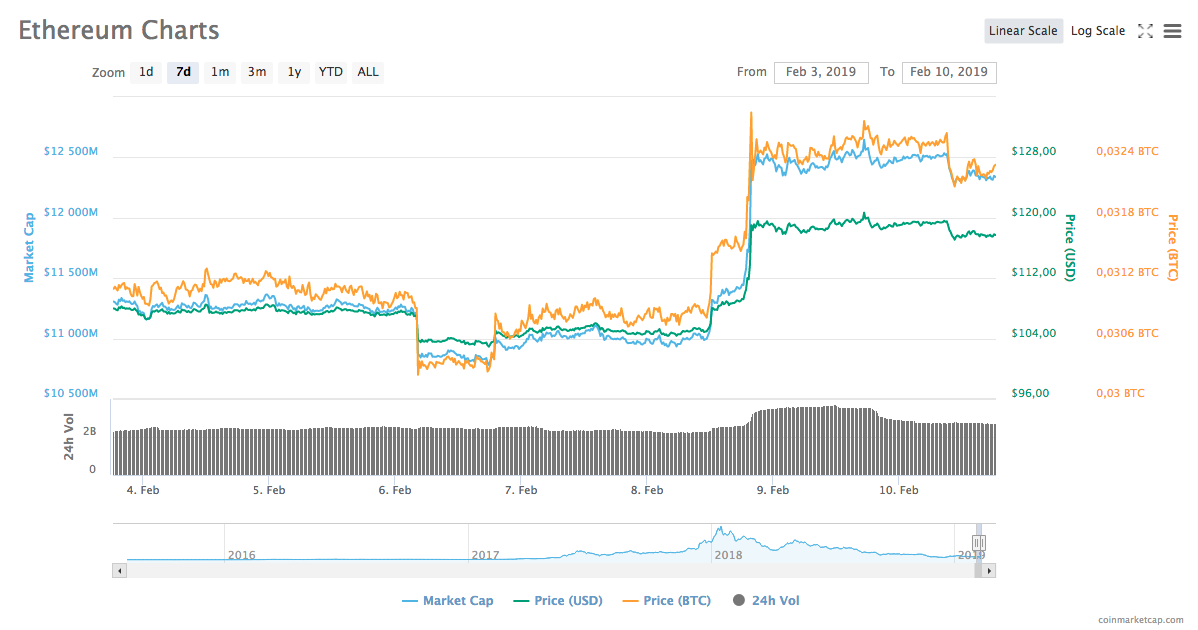 The total market capitalization of all cryptocurrencies, which peaked at over $122 billion at some point on Feb. 9, has also gone down to approximately $120.1 billion, according to CoinMarketCap. The daily trading volume for the last 24 hours is around $18 billion.

Binance Coin (BNB) and Maker (MKR) are the only gainers among the top 20 cryptocurrencies on the day. BNB, currently the 10th largest coin by market cap, has been continuously growing since Feb. 6. The currency has been up almost 7 percent and is trading at about $9.2 as of press time. MKR, in its turn, is up 3.2 percent on the day and is hovering around $450.

Other major currencies are mostly in the red, seeing slight to visible losses. Bitcoin Cash (BCH) and Tron (TRX) have lost the most, both down about 4 percent, according to CoinMarketCap.

In industry news, the CEO of the Intercontinental Exchange (ICE) Jeff Sprecher has said he expects the firm’s much anticipated digital asset platform Bakkt to launch later in 2019.

Moreover, the commissioner of the United States Securities and Exchange Commission Heister Peirce, who is labeled “Crypto Mom” for her attitude to the industry, spoke out on the regulation issues in U.S in a recent speech. She believes that the lack of clear legal framework for crypto allows technology to come into its own.