McAfee on BTC, Exile & the US: 'No Way the Current System Can Survive’

John McAfee speaks with Cointelegraph about Facebook’s Libra, the importance of privacy and why he hasn’t paid U.S. taxes in eight years.

“God Almighty, I am a rebel. I'm an outrage to the stability of the U.S. corrupt government” — John McAfee talks to Cointelegraph about living on the run and the future of crypto adoption 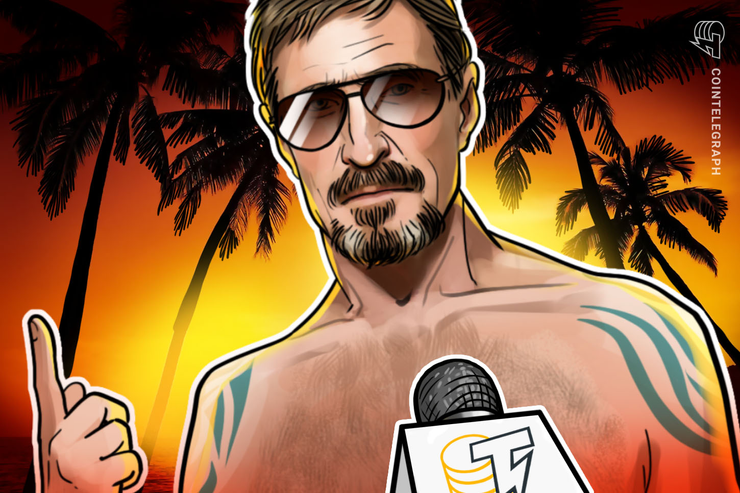 When people outside of crypto think of John McAfee, they think computers, cybersecurity, anti-virus software. But in the world of crypto and blockchain, you think of a yacht in tropical waters, passionate — and sometimes, admittedly, inebriated — tweets on tech and crypto... and an enviable amount of partying.

When I called McAfee to talk on record, he was sitting at a table outside a cafe in Cuba with palm trees and patches of blue sky behind him.

We talked about McAfee’s presidential campaign in the United States, his relationship with the U.S. government, cryptocurrency mass adoption and why he’s actually a patriot in exile.

Olivia Capozzalo: You tweeted recently that Libra is a "grotesque distortion of the original intent of Cryptocurrency — economic freedom."

John McAfee: Libra is a universal, digital identification that's going to be rolled into the cryptocurrency, meaning that everything that you do with that currency can be monitored and traced back to you.

Now, I'm a firm believer in privacy and even anonymity when it comes to our financial transactions.

We each have the right to earn a living and to do what we wish with the money that we earn. I mean, if not, then we are still under the control of the financial system we're trying to escape from.

That is the purpose of digital currency: to give control of currency back to the people rather than to governments and institutions that can control the currency that we use.

The reverse of privacy is a system where everything that you do is known. This is what Facebook has produced.

Please God, we cannot tolerate this. Now, they can produce it, but we do not have to use it.

Please understand that using Facebook is the abdication of everything that we have worked for for almost 10 years. So understand what it is, let them do what they want, but please, God, do not accept it as your standard of currency.

OC: So, you're in Cuba right now. Are you getting a sense of cryptocurrency use there or people's relationship to crypto or blockchain.

JM: Well, keep in mind Cuba is a very unique country. It's the only communist country in the Caribbean area — the closest communist country to America. Cryptocurrency has had very little impact on the economy here, on the people. And very few people understand it or know anything about it.

For safety reasons, I'm trying to keep my mouth shut here and talk about crypto in other parts of the world because I really have no choice of anywhere else to go.

Well, it's true. I haven't paid taxes in eight years, and I never intend to pay them again.

To me, they are unconstitutional in America and they're illegal.

So, the U.S. then manufactured a bunch of other things — murder, money laundering and racketeering — which every country would hav