Report: Bitcoin’s Recent Surge Due its Maturation as an Asset

New data suggests that bitcoin's growth is explained by its maturation as an asset.

9766 Total views
183 Total shares
Listen to article
0:00
News
Own this piece of history

New data suggests that bitcoin's (BTC) growth is explained by its maturation as an asset based on conversations surrounding the leading cryptocurrency, Bloomberg reported on May 15.

Bloomberg cited a report from web intelligence platform Indexica, that developed an index based on natural language processing of textual documents in an effort to explain bitcoin’s recent surge.

The research reportedly revealed three major drivers of the coin’s growth, including conversations surrounding bitcoin, fewer concerns about fraud and a shift in the sentiment of how people talk about bitcoin from the past to the future. The report states that more financial experts and academics are deliberating about bitcoin, and traditional institutions are taking it more seriously.

Explaining the future issue of bitcoin, Zak Selbert, chief executive officer at Indexica, reportedly argued: “Think about it, executives will speak of good things they expect to happen on conference calls before they happen. They only mention mistakes afterwards.”

Over the past month, bitcoin has demonstrated an impressive surge from around $5,075 on April 15 to its current price of around $8,178, according to CoinMarketCap. 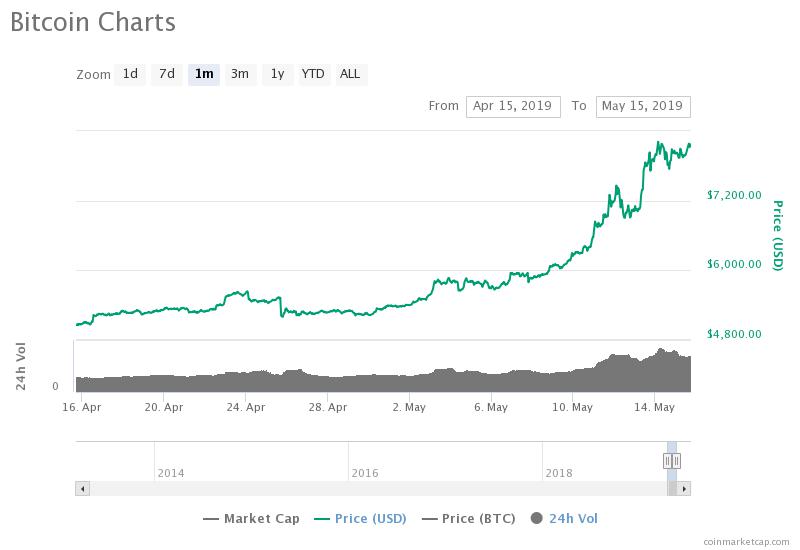 Today, Erik Voorhees, CEO of cryptocurrency exchange platform ShapeShift, argued that the volatility seen in bitcoin and altcoin markets over the years is a necessary phenomenon for a nascent asset, stating that bubbles are an essential part of the industry’s growth.

Leading derivatives marketplace CME Group reported record volume for its bitcoin futures on May 13 as the cryptocurrency’s surprise bull market continued. That figure represented an equivalent 168,000 BTC ($1.35 billion) — an almost 50% rise versus the previous high of 22,500 contracts and 112,700 BTC (currently $909.2 million) on April 4.