The largest cryptocurrency Bitcoin forms a clear lead over other options for a ten-year investment, with gold in second place and fiat firmly losing.

Almost 60% of 70,000 people would take Bitcoin (BTC) over fiat currency as a long-term investment.

That was according to a new survey on Nov. 4 by Ron Paul, the ex-Texas Congressman who has become well known for his proactive position on cryptocurrency.

Part of a regular series of polls, Paul asked Twitter users about their investment preferences for $10,000 of value, delivered as a lump sum and untouchable for ten years.

So far, out of more than 67,000 responses, Bitcoin is easily the most popular choice, with 58% of the vote. 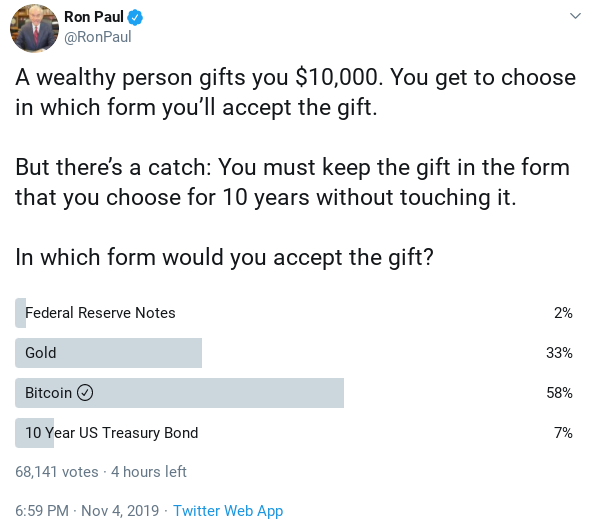 Second in line is gold on 33%, while fiat currency in the form of US dollar notes is trailing on just 2%.

The results are even more complimentary for Bitcoin than Paul’s 2018 survey, during which it finished on 49% after 59,000 votes.

The survey underscores the continued interest in alternative forms of money as global geopolitical uncertainty takes its toll on a number of countries’ national currencies.

Centered on making HODLers take funds off third-party exchanges, Proof of Keys aims to educate cryptocurrency users about the responsibilities involved in using money that does not depend on a central bank.