Most of the top 20 cryptocurrencies are reporting slight gains as Bitcoin approaches $4,000.

Saturday, March 9 — most of the top 20 cryptocurrencies are reporting slight gains on the day by press time. Bitcoin (BTC) is approaching the $4,000 mark again, according to Coin360 data. 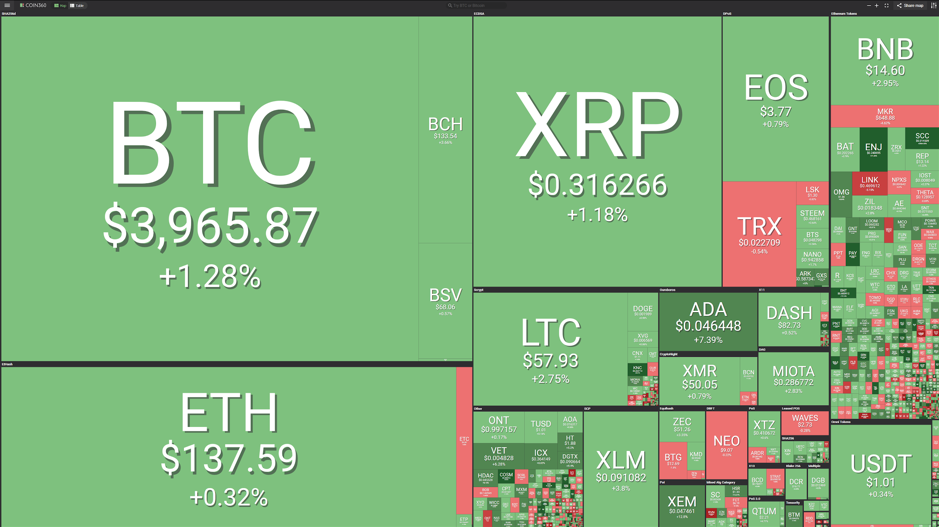 At press time, Bitcoin is up just under one percent on the day, trading at around $3,960, according to CoinMarketCap data. Looking at its weekly chart, the current price is nearly three percent higher than $3,851, the price at which Bitcoin started the week.

In Bitcoin news, Twitter and Square CEO Jack Dorsey alluded to spending $10,000 per week on BTC on a podcast earlier this week.

Ethereum (ETH) is holding onto its position as the largest altcoin by market cap, which is at about $14.4 billion. The second-largest altcoin, Ripple (XRP), has a market cap of about $13 billion.

ETH is down by a very mild 0.15 percent over the last 24 hours. At press time, ETH is trading around $138, after having started the day around the same price. On its weekly chart, Ethereum has seen its value increase by about 2.5 percent from $133, ETH’s price last Saturday.

A recent report by crypto asset management firm Electric Capital claimed that Ethereum has the most developers per month working on its core protocol of all cryptocurrencies.

Second-largest altcoin Ripple has gained just over a third of a percent in the 24 hours to press time and is currently trading at around $0.314. Looking at the coin’s weekly chart, its current price is almost identical to the price at which it started the week, down just 0.44 percent.

Recently, Ripple’s CEO, Brad Garlinghouse, said that the digital asset being developed by United States banking giant JPMorgan Chase —  reported to potentially be an XRP competitor — lacks the interoperability that would make it a significant innovation.

Among the top 20 cryptocurrencies, the one experiencing the most notable growth is Nem (XEM), which is up nearly 10 percent on the day to press time.

The total market cap of all cryptocurrencies is pushing $135 billion today, close to four percent higher than $130 billion, the value it reported one week ago.

As Cointelegraph recently reported, economist and notorious cryptocurrency critic Nouriel Roubini has claimed that crypto “as a technology has absolutely no basis for success.”