US House Committee Hearing With the SEC on Libra, Crypto and Securities 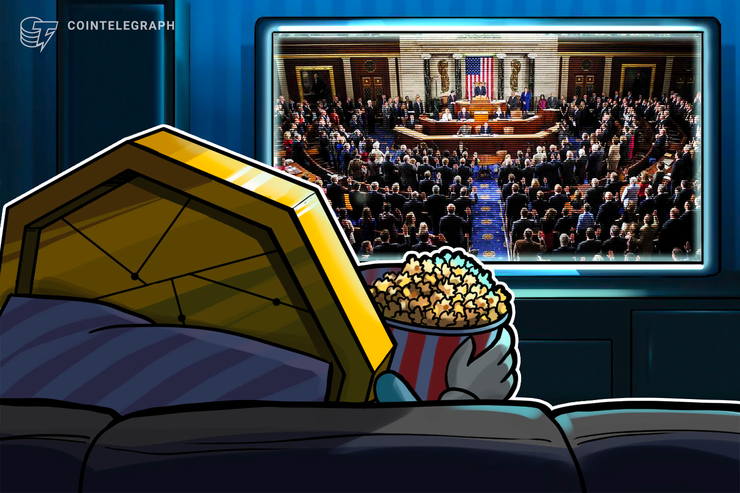 As Cointelegraph reported on Sept. 20, the United States House of Representatives Financial Services Committee is holding a hearing today, Sept. 24, with the Securities and Exchange Commission (SEC) Chairman Jay Clayton and four other SEC commissioners.

At the time of the announcement, the published agenda included such critical topics for Cointelegraph’s readers as the SEC's "Howey test" for considering cryptocurrencies securities, regulation strategy for Facebook's Libra, the 144A exemption that crypto offerers like Van Eck operate under, and more general "Environmental, social, and governance" (ESG) matters.

Financial Services Chair Maxine Waters began the hearing with statements touching on a wide range of the SEC’s activities, singling Facebook’s Libra out, saying that itt appears that “Facebook is looking to establish a new global financial system intending to rival the U.S. Dollar.”

Republican Ranking Member Patrick McHenry encouraged the SEC “to reduce regulatory barriers,” saying that “you will hear a lot of doom and gloom today. It is not all doom and gloom.”

10:17 Opening statements from the Commissioners

Commissioner Hester M. Peirce expressed concern about “overriding investor preferences,” saying that the job of the SEC is not to make decisions for investors. She also emphasized the importance of “regulatory humility,” the need to “always be asking if what we’re doing is right,” entailing work with investors, corporations and other regulators like the Commodity Futures Trading Commission (CFTC).

Commissioner Elad L. Roisman said that “market integrity is a priority for us.”

The increase in capital raised in private rather than public markets were front and center in Commissioner Allison Herren Lee’s concerns, as were the role of digital assets and cryptocurrencies, as well as financial intermediaries.

Chairman of the SEC Jay Clayton began his remarks by applauding the commission's recent progress in IT and cybersecurity, but cautioned: “let there be no doubt: substantial risk remains.”

Clayton also put forward the enduring goal of aligning the interests of “main-street investors” with those of professionals.

Rep. Waters asked Commissioner Jackson about a 10b5 exception to insider trading law before shifting the conversation to Facebook’s Libra, referring to recent comments from President Trump, as well as the governments of France and Germany.

Waters’ June call for a moratorium on Facebook’s development of Libra set off a summer full of news on potential regulation of the prospective token.

Clayton responded to Rep. Waters: “what we have developed is an ecosystem of financial assets over the years,” saying that he indeed has a problem with the potential of digital assets to evade those existing regulations. He did, however, praise the efficiency of cryptocurrencies at large. Waters, however, pressed on Libra.

Continuing with the theme of cryptocurrencies and Libra, Rep. McHenry noted that Facebook’s planned token “is just an idea at this point; a white paper.” But he asked if an appropriate ecosystem existed for cryptocurrencies, which Commissioner Peirce responded to with skepticism.

Rep. Brad Sherman, whose incendiary commentary at the Libra hearings with David Marcus back in July was so memorable, said that:

“The U.S. dollar is extremely good currency [...] It fails, however, to meet the needs of tax evaders, sanctions evaders, drug dealers and terrorists.”

Rep. David Scott asked the commissioners about the broad state of regulatory affairs regarding fintech. Peirce responded that a great deal of development is happening overseas, and she would consequently “like to bring more regulatory clarity to the United States so that fintech development can happen here.”

When Rep. Al Green grilled Clayton on the prospect of subjecting Libra and the Libra Investment Token, Clayton answered:

“I think statements like ‘if it doesn’ produce a return, it’s not a security’ — I think that’s a bit of an oversimplification. [...] A lot of lawyers will spend a lot of time figuring out just where that line is.”

Citing a letter from Facebook that declared that the company would not launch Libra without addressing all regulatory concerns, Rep. Emanuel Cleaver asked Clayton whether any concerns had been sent to Facebook. Clayton said that there is a group within the SEC that is working on the question and has its doors open.

Data security was first among Rep. Barry Loudermilk’s concerns. “In this environment, it is more than a full-time job to stay ahead of the bad actors,” he said, suggesting that the stockpile of data that the SEC holds makes it a ripe target for nation-states and cybercriminals. Clayton agreed with the importance of asking whether the SEC needed certain information. Loudermilk rebutted, “is it data you need to store or is it data that you can retrieve?”

Rep. Warren Davidson took the opportunity to promote regulatory clarity and to plug the Token Taxonomy Act that he authored with Representative Darren Soto as a means of coping with unclear regulation for crypto. He also submitted blockchain as a solution to Rep. Loudermilk’s concerns, saying “I do hope that blockchain can play a role in the data security concerns that this country has.”

Rep. Anthony Gonzalez commented further on concerns that innovation in crypto was leaving the U.S. due to lack of regulation. He asked the commissioners: “when can we expect something a little bit more concrete from the SEC — or what are you doing to get there — so we can just provide some certainty here?” Gonzalez’s concluding remark was simply “Go faster.”

Note: All time stamps in EST.