Bitcoin figures continue to highlight the dangers of U.S. economic policy as debt hits record highs of $23 trillion and dollars keep getting printed.

The average budget deficit of the United States will “never” be less than $1 trillion per year in the future — or 4.5% of GDP, worrying data on the fiat economy shows.

Compiled by the U.S. Congressional Budget Office (CBO) and shared by crypto hedge fund manager Travis Kling on Jan. 21, statistics reveal that the annual deficit is set to hit $12.2 trillion for the entire 2020s.

“Such deficits would be significantly larger than the 2.9 percent of GDP that deficits averaged over the past 50 years,” the CBO itself commented when it released the projections last September. 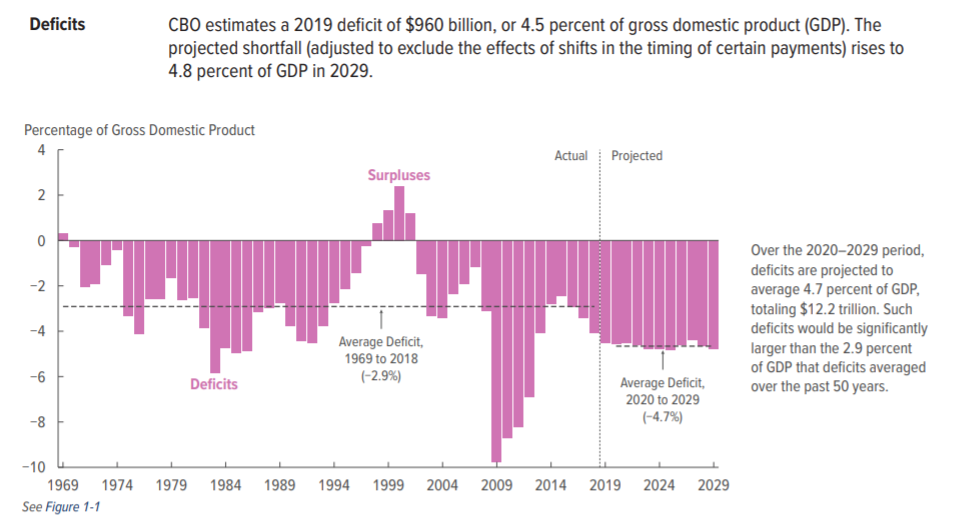 The data concerned Kling, who like other Bitcoin proponents has drawn clear distinctions between the cryptocurrency and fiat currency.

As Cointelegraph reported, the deficit is not the only worrying aspect of U.S. economic policy to surface in numbers in recent months. Late last year, it emerged that the country’s total debt is now higher than ever at $23 trillion, while the world’s total debt is $255 trillion — or $12.1 million for each Bitcoin.

In simple terms, budget deficits occur when the value of a country’s spending exceeds the value of its revenues. As Kling notes, governments can use fiat to plug the difference, allowing them to increase the money supply which they can then direct as desired.

Over the New Year period, the Federal Reserve added $425 billion to the dollar supply.

The process has its roots in Keynesian economics, which calls for states and central banks to “manage” the money supply instead of allowing the market to decide prices for goods and services.

Such a setup creates a problem known as the “Impossible Trinity” — attempting to achieve free capital flows, a fixed exchange rate between currencies and independent monetary policy.

“Imagine the allure as a politician of promising your constituents all the spending they want, w/o ever having to raise taxes. Spend more AND cut taxes! There's no inflation!” Kling wrote on Twitter.

“This has been tried many times before in monetary history and there is no example where it ended well.”

As Saifedean Ammous explains in his book, “The Bitcoin Standard,” preventing “meddling” by governments and central banks would reverse the processes which lead to phenomena such as deficits. This is because fiat would cease to be money “by decree” as its name implies, and would instead operate without a central authority, similar to Bitcoin.