US Ranks as ‘Most Favorable’ Country for ICOs in Recent Report

The U.S. and Switzerland ranked as top two ‘most favorable’ countries for running an ICO, according to a new report.

The U.S., Switzerland, and Singapore were ranked as the top three “most favorable” countries for Initial Coin Offerings (ICO) in a recent report, according to a press release the researchers shared with Cointelegraph July 14.

Analysts associated with the Crypto Finance Conference compiled the research based on publicly available data of the top 100 ICOs by country in terms of funds raised and ranked them by number of projects launched.

The report highlights the U.S. as the most favorable country for ICOs with a  total of 30 companies launched in the field. The second country is Switzerland, which is responsible for half as many of the projects, while Singapore is ranked third place with 11 projects. 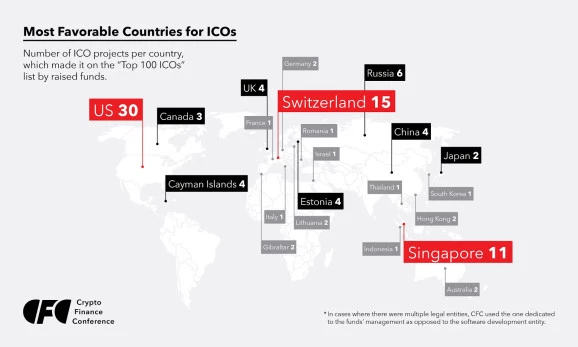 The report also features Russia, Estonia and the UK as some of the most promising countries for crypto project funding.

As Cointelegraph reported last week, the largest ever month for ICO investment took place just four months ago, and 2018 has also seen the time taken to complete and ICO, and success of these projects, shift significantly since last year.

Cointelegraph also recently reported that ICO volumes reached new records in the first half of 2018, amounting to already twice as much as it was during the entire year of 2017.

As a top location for conducting biggest ICOs and crypto projects, the U.S. continues to combat cases of illegal activity in the sphere. Earlier this week, the Texas State Securities Board (SSB) issued an an emergency cease and desist order to a network of cryptocurrency-related firms allegedly accused of offering fraudulent crypto investments to state residents.