Weiss Crypto Ratings puts Bitcoin in third place in its report dedicated to emerging trends in crypto markets for 2019.

Weiss Crypto Ratings has put Bitcoin (BTC) aside XRP and EOS in its report on emerging trends in crypto markets published Tuesday, March 26.

The report — dubbed “Dark Shadows with a Bright Future” —  is based on the analysis of 120 cryptocurrencies, and assigns letter grades to cryptocurrencies that have the best combination of adoption and technology.

XRP, the world's third largest coin by market capitalization according to CoinMarketCap, is ranked “A,” and per the report is the “best positioned” to compete with SWIFT — a global system for interbank transactions. EOS  also received an A grade as the leading cryptocurrency that is challenging Ethereum (ETH) in an attempt to become the “backbone of the new internet”.

BTC received an A grade for its Lightning Network upgrade and the ability to become a popular store of value for savers and investors. The world’s top currency is followed by Ethereum (A-) and Cardano (B+) that are highly valued due to their smart contract capabilities. 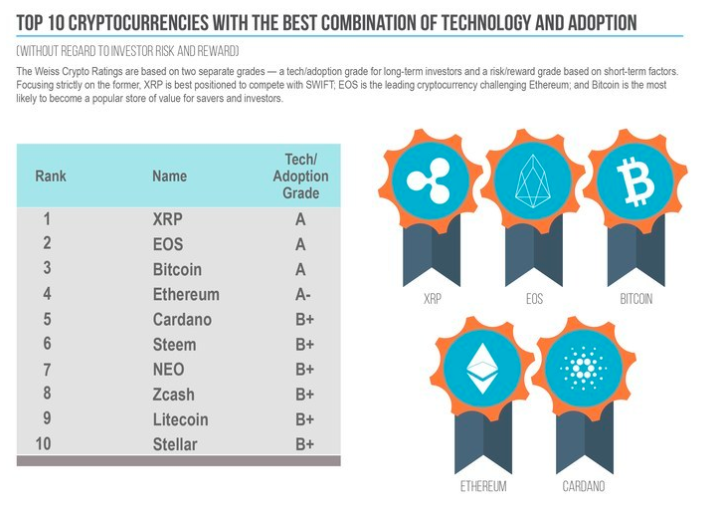 However, the results of another rating in the report dedicated to risk and reward factors are far from satisfying. According to Weiss Crypto Ratings, only four coins — EOS, XRP, BTC and Binance (BNB) — can be valued as B-, with none of the currencies getting an A.

Weiss Ratings founder, Martin D. Weiss, believes that despite the bear markets the best time to invest in cryptocurrencies is near:

"Despite lower prices since early 2018, our ratings model gives us hard evidence that a critical segment of the cryptocurrency industry has enjoyed remarkable growth in user transaction volume, network capacity, and network security [...] Therefore, for those willing to take the risk, the best time to invest could be very near."