Bearish markets are seeing slight gains today, with almost all top 10 coins in the green after yesterday’s sharp losses.

Crypto markets are seeing a modest recovery today, June 11, with almost all top ten coins in the green, as data from CoinMarketCap shows. 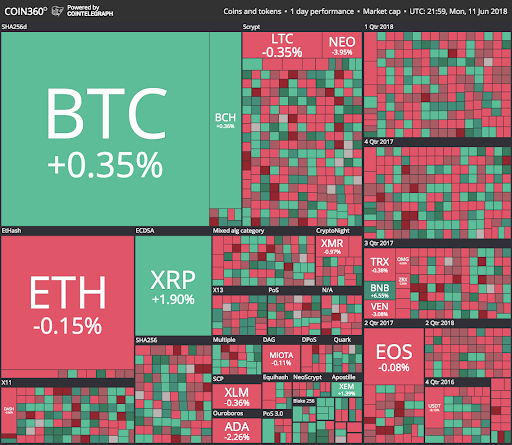 Tone Vays, who has generally forecast a significant fall in BTC/USD through 2018, posted a new analysis this weekend drawing a parallel between Bitcoin in Q2 this year and in late summer 2014:

It has been a long time since I've posted a $BTCUSD chart like this. Kind of miss it but it's really time consuming. My most optimistic Bearish #Bitcoin target remains at $4,975 first half of July. I will update my % expectation on future targets once it's hit. pic.twitter.com/UUhbFgzoSe

In Vays’ opinion, Bitcoin will soon fall below $5,000, its lowest threshold since October 2017.

As of press time, CoinMarketCap data indicates BTC trading volumes of 4.8 bln, up from their intra-weekly low of 3.8 bln on June 9.

Top altcoin Ethereum (ETH) is also up slightly on the day, seeing almost 1 percent growth and trading at around $519 to press time. The coin only recently lost its ground at the psychological price point of $600, and is now testing a new round figure low of $500. Ethereum’s monthly losses are now at 26 percent. The persistent bear market has drawn the attention of international mainstream media, including Bloomberg, the Wall Street Journal (WSJ), Reuters, and the Guardian, who have all attributed yesterday’s market dip to the recent hack of minor South Korean crypto exchange Coinrail over the weekend.

While more seasoned crypto industry commentators have dismissed the Coinrail heist as highly unlikely to have impacted the price action on markets, other FUD – Fear, Uncertainty, and Doubt – theories are seeing some traction.

The news echoed a separate report from May – again citing unnamed sources – that  revealed that the U.S. Department of Justice (DOJ) had opened a probe into Bitcoin (BTC) and Ethereum (ETH) price manipulation, this time targeting illegal activities such as spoofing and wash trading.

The U.S. context continues to place high demands on cryptocurrency exchanges to come under the purview of regulators, with the U.S. Securities and Exchange Commission (SEC) last week declaring it has been “underwhelmed” by regulatory adherence among exchanges.

Among the top twenty cryptocurrencies by market capitalization, Binance Coin has seen the most growth, up 7.3 percent on the day. The growth is likely related to today’s positive news from the world’s second largest crypto exchange, Binance, that the exchange will offer crypto-fiat trading on its Malta-based platform.

Total market capitalization for all cryptocurrencies is at $296 bln to press time, in stark contrast to the $470 bln mark hit during the markets’ tantalizing rally in early May.