Bitcoin hits a five-month low and clocks 36% daily gains in a single week, and Congress unconvinced after Zuckerberg showdown.

The world’s largest cryptocurrency has had us all in for a white-knuckle ride this week. Wednesday saw Bitcoin (BTC) crash $500 in a matter of minutes and sink to $7,500 — a five-month low. Saturday was a different story. At one point, BTC had realized massive gains of 36% on the day — taking the coin hurtling beyond $10,100. One commentator claimed it was the fourth-largest gain in Bitcoin’s history, and the biggest daily gain since 2011. As ever, it’s unclear what’s behind the surge. Record trading volumes of Bakkt futures contracts may be one factor, and as we’ll explore a little bit later, some words of encouragement from Chinese President Xi Jinping could have played a role too.

So, more on those comments from Xi Jinping — comments that may have proven catnip for the crypto markets. On Thursday, he called for China to accelerate its adoption of blockchain — and said doing so would be essential for technological innovation and transforming industries. Jinping cited clear direction on future strategy, as well as increased investment, as other ingredients for success. It is worth remembering here that Beijing is advocating blockchain here, not Bitcoin. A long-standing aversion to cryptocurrencies remains in China, where ICOs and crypto exchanges have been banned, and mining could follow next. Nonetheless, a Chinese central bank digital currency is in the works — bringing us very nicely on to our next guest.

Zuck of the Hill: After six-hour Libra grilling, Congress unconvinced

Mark Zuckerberg headed to Washington, D.C. this week — and it wasn’t for a nice, relaxing visit to the Smithsonian. Instead, the Facebook CEO faced six hours of questions from the United States Congress, predominantly from lawmakers who remain hostile to the social network’s Libra stablecoin. The billionaire warned innovation is essential if America is going to remain a global financial leader, especially considering there’s growing competition from China, where businesses “certainly don’t share our values.” Although his appearance in front of the House Financial Services Committee was meant to allow politicians to ask questions about Facebook, some Congress members used their allotted five minutes to criticize Zuckerberg instead. Rep. Brad Sherman was especially dismissive — and said cryptocurrencies either displace the U.S. dollar or cause investors to lose a lot of money. Overall, it seems very little has changed, meaning the impasse between Facebook and Washington will rumble on, prolonging the uncertainty about Libra’s launch date. As the committee’s chair, Rep. Maxine Waters, told Cointelegraph: “At this point, I am not a supporter of Libra. I don't know what it is, I don't think that that has been adequately explained.” 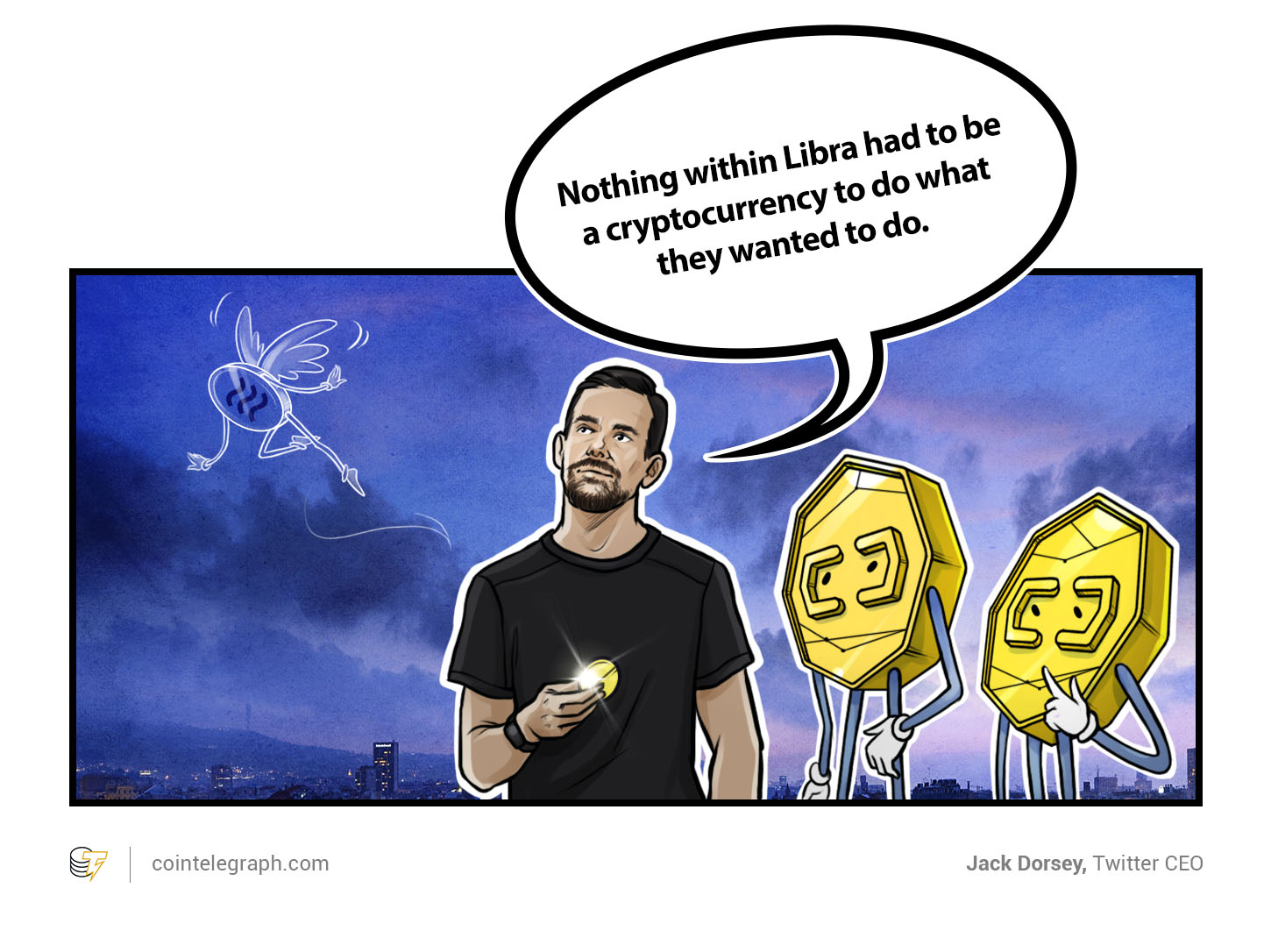 Revealed: How much wealth has been transferred using Bitcoin

New data this week revealed that a whopping $11 trillion in wealth has been transferred by Bitcoin since its blockchain went live a decade ago. According to crypto analyst PlanB, the network processes an average of about $9.6 billion per day. To put this all into perspective, PayPal’s annual transaction volume was $578 billion across the whole of 2018 — meaning that, at this rate, it takes just two months for BTC to surpass it. In other developments, a survey by a financial services firm suggested that the number of Americans who own cryptocurrencies has almost doubled this year. Back in April, a report had suggested that BTC could overtake other global payment systems such as Visa and Mastercard a decade from now.

We’ve been blocked for more than a month — but now, we’re back on Facebook, baby. There was a lot of confusion surrounding why the block had gone into force. Although the social network has a staunch anti-crypto policy when it comes to paid advertisements, our page reports industry news — not the “misleading, fraudulent or deceptive” information its company policy prohibits. Our page on Facebook-owned Instagram had also been unaffected throughout the incident. Alas, there’s no point crying over spilt milk. A Facebook rep has told Cointelegraph that the page was unpublished in error, meaning it’s now live again. Come and give us a like! 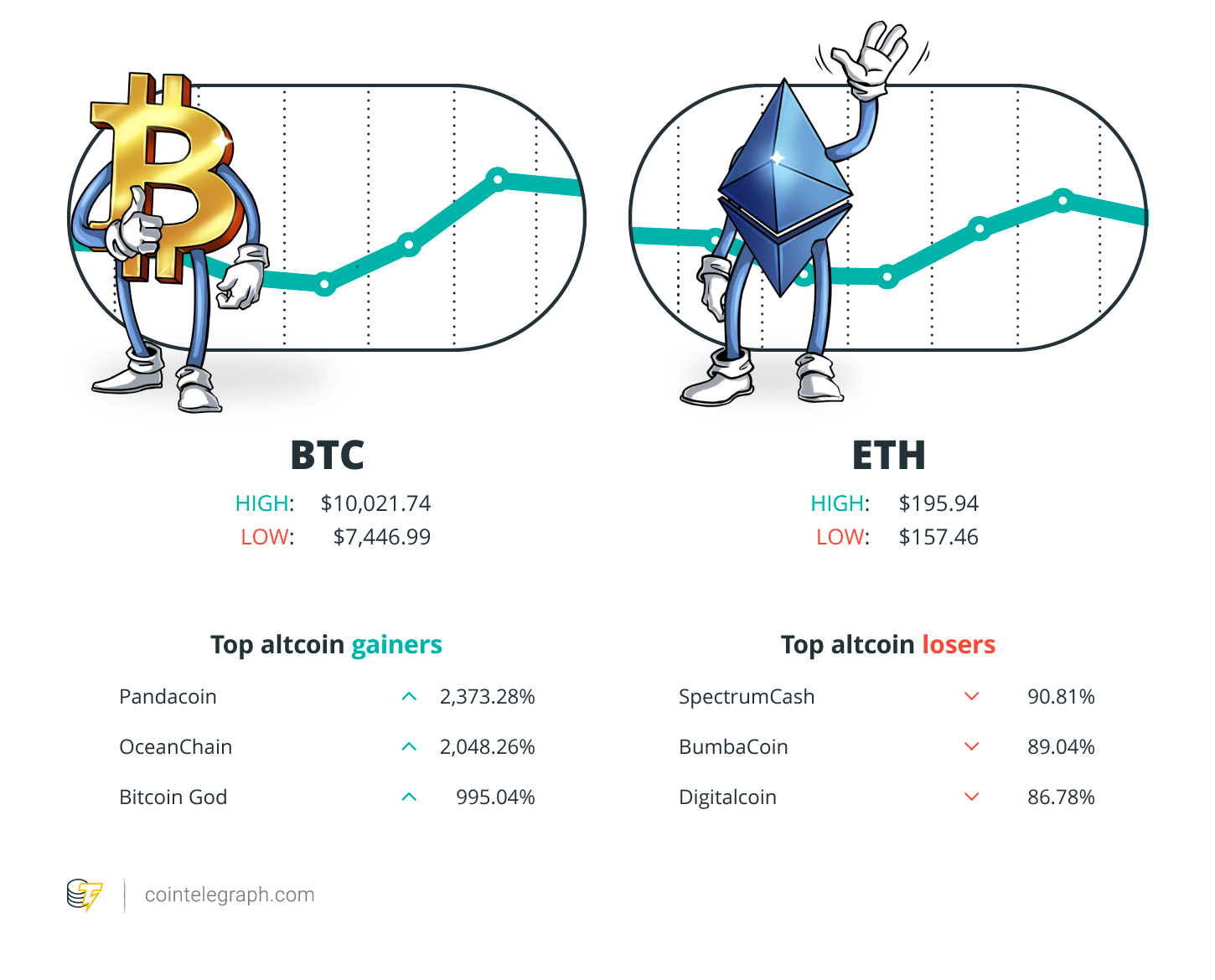 “Today, six out of 10 of the top tech companies are coming out of China and certainly don’t share our values.”

“The most potent case for cryptocurrencies: banks are never there when you need them.”

"Nothing within Libra had to be a cryptocurrency to do what they wanted to do."

“Cryptocurrency either doesn’t work, in which case investors lose a lot of money, or it does achieve its objectives perhaps and displaces the U.S. dollar or interferes with the U.S. dollar being virtually the sole reserve currency in the world.” 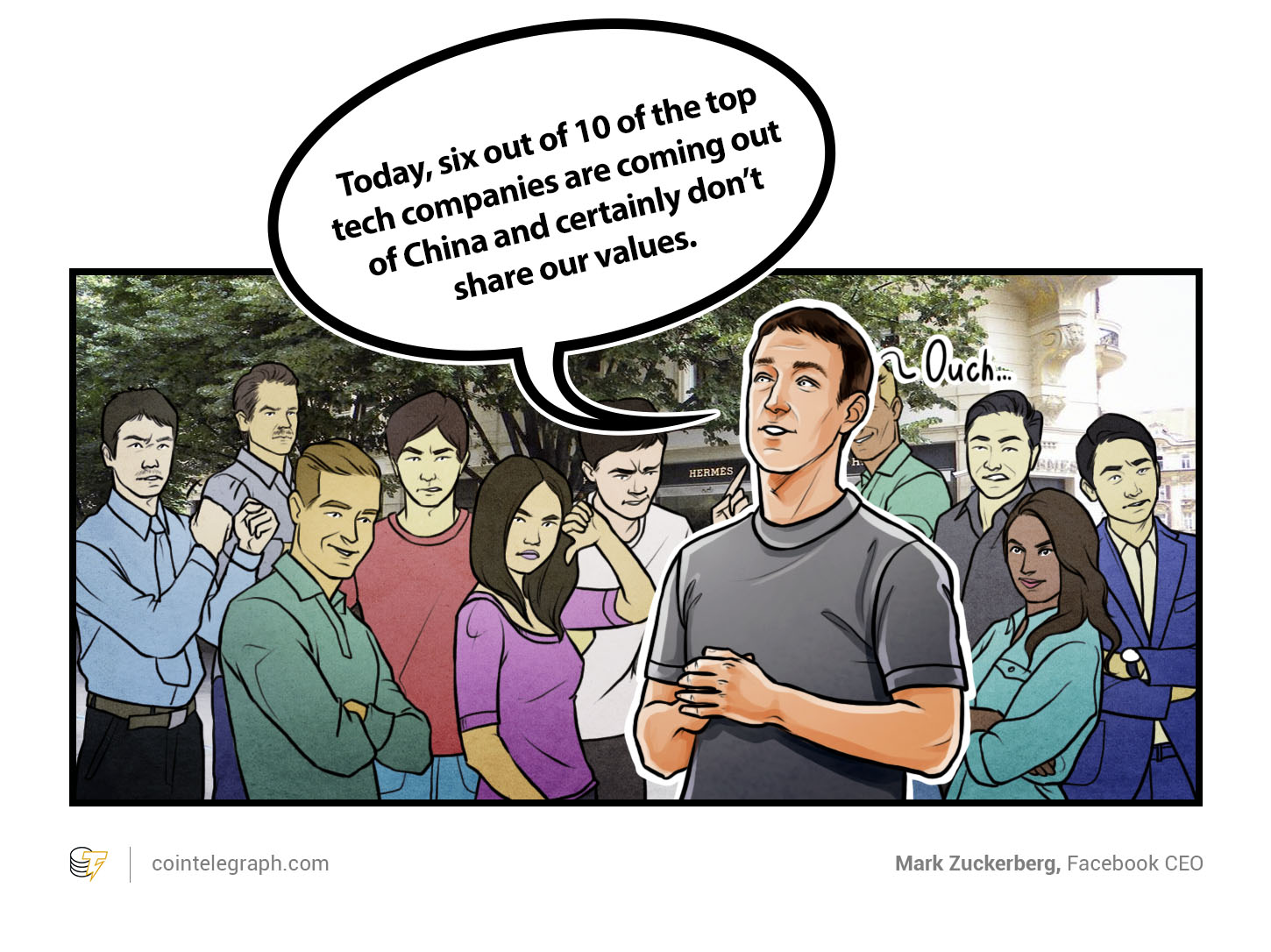 “We must take blockchain as an important breakthrough for independent innovation of core technologies, clarify the main directions, increase investment, focus on a number of key technologies, and accelerate the development of blockchain and industrial innovation.”

Head of Crypto Capital arrested in connection with money laundering

The president of the controversial Panama-based payments processor Crypto Capital has been arrested by authorities in Poland. The company has ties to Bitfinex and other major cryptocurrency exchanges. Ivan Manuel Molina Lee is suspected of money laundering and being involved in an international drug cartel. He was subject to a European arrest warrant, and his detention was reportedly connected to $350 million previously seized by Poland’s Ministry of Justice. Following the arrest, Bitfinex described itself as a “victim of a fraud” — and fiercely rejected allegations that its exchange had laundered funds at Crypto Capital’s request as “categorically false.”

An unknown Bitcoin Cash (BCH) miner was apparently in control of more than 50% of the token’s hash rate for 24 hours. Reaching this threshold runs the risk of them being able to dominate the entire network and do “nefarious things.” Some factions of Crypto Twitter cited the incident as a reason why BCH “is a security risk and a liability” — urging the coin to be delisted. Others have suggested that Bitcoin miners might be diverting their attention to BCH as an outlet for their otherwise useless levels of hashpower. 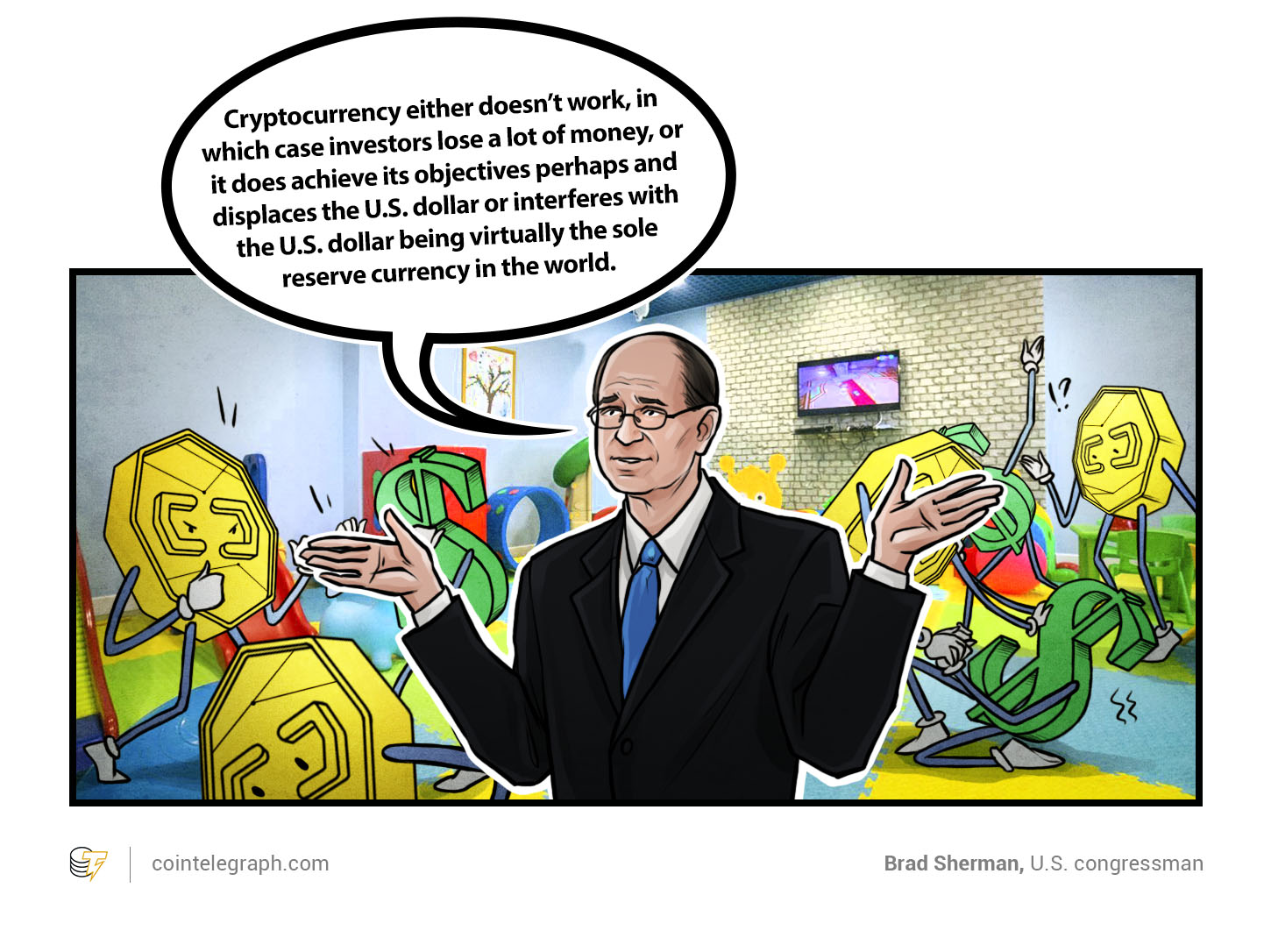 The U.S. Justice Department official who prosecuted the infamous Silk Road case has warned that the fiat-dominated financial system is inept at tackling the very thing it purports to worry about when it comes to crypto. Andreessen Horowitz general partner Kathryn Haun claimed “99.9% of all money laundering crimes go unprosecuted.” Haun said that the financial services industry spends an estimated $20 billion a year on Anti-Money Laundering and Know Your Customer checks — but questioned whether any of these measures are actually working.

Privacy-focused cryptos hunted down by forensics and exchanges

Two of the largest crypto exchange markets in Asia are increasingly pressuring exchanges to delist privacy-focused crypto assets. Cointelegraph’s Joseph Young looks at whether analytics firms are any closer to tracing transactions processed by privacy coins such as Monero.

Rep. Warren Davidson: You have to defend money to defend freedom