Will the mass adoption of blockchain help the industry flourish, or destroy the fundamental nature of the tech’s decentralized principles?

Prediction can be a bit of a gamble. And when cryptocurrency and blockchain are involved, it wouldn’t be surprising to see people shying away from scrying experiments of any sort. Blockchain gets a bad rep because of its relation to Bitcoin (BTC), the cryptocurrency that many love to hate due to its apparently volatile value. But according to George Gilder, co-founder of the Discovery Institute in Seattle:

“Blockchain is the future...it will usher in a world beyond Google.”

That’s a pretty hefty claim to make. In order for blockchain to truly flourish as the next “global fabric for value exchanges and thus value democratization,” mass adoption happening in a relatively short period of time is key to success. But, moving forward in the sea of mass adoption, how does the future of blockchain and cryptocurrency look? With companies like Facebook and JPMorgan launching their own coins, will they be able to retain the fundamental decentralization principles of blockchain, or will modifications have to be made to its basic nature?

This is a trending theme within our industry, and I touched upon it in my keynote presentation at the World Economic Forum in Davos last year. I also reached out to some industry leaders and friends of mine — Tim Draper, Alex Mashinsky, Miko Matsumura and Roger Ver — to get their thoughts, which are included below. Read on to see the future of blockchain explained.

To start off, let’s run through some blockchain technology basics — how does it work? Blockchain information is not stored in any central or single location (making hackers’ lives pretty difficult), and exists as a shared database that is being updated all the time, globally. Cryptocurrencies use this technology to create a shared decentralized accounting system.

For a system whose intrinsic nature gives primary importance to shared data, equality and decentralization, mass adoption initiated by digital conglomerates like Facebook could be potentially threatening.

Facebook, one of the world’s most powerful companies, has been widely harvesting and monetizing data since its inception, and any of its products putting personal data in jeopardy is a safe bet. With the creation of Libra, cryptocurrency — which is supposed to be widely mistrustful of centralized financial authorities — is falling back into the fiat trap of trusting a single entity with users’ money. In fact, only the members of the Libra Association can mine its blockchain information, turning the association into a giant central bank. These developments raise crucial questions about the future of decentralized cryptocurrencies following mass adoption.

How does blockchain technology work?

Let’s take a look at why exactly decentralized blockchain is considered to be the star of the future of data sharing. After explaining basic blockchain technology, it’s probably clear that it addresses a lot of the concerns prevalent in the “Google Age,” starting off with things like fragile internet security and other things like concentrated economic power and high transaction costs. This is also what prods Gilder into suggesting that Google as the middleman, so to speak, may not require an existence soon. It’s also a safe and interoperable tool which allows the coexistence of privacy and deeper community behavior insights. As Dr. Andreas Freund suggests, blockchain’s capacity to “remember” everything within its ecosystem allows for a seamless community-sharing experience.

The World Economic Forum recently launched a central bank digital currency policymaker toolkit. Sheila Warren, the head of blockchain and DLT at the WEF, said that the potential impact of central bank-issued digital currencies, or CBDCs, implemented into the global economy was one of the main reasons behind the framework. Digital currencies improve financial data transmission, reporting and traceability. The president of the European Central Bank, Christine Lagarde, also accepts the presence of a huge demand for CBDCs, in order to enable cheap cross-border payments in record time.

Related: As the WEF Warms Up to Crypto, Its Head of Blockchain Talks Empowerment

What then, are some of the key points in the mass adoption of blockchain technology? According to Chuck Ng, CMO at Project Pai, it’s the public faith in the value of blockchain working in tandem with increased scalability and added clarity in terms of regulation that are the three main factors pushing the need for mass adoption.

A quick look at Gartner’s Five-Step Hype Cycle shows how, after the hype bubbles burst, the things able to emerge from that unscathed are what lead us onto the Plateau of Productivity. 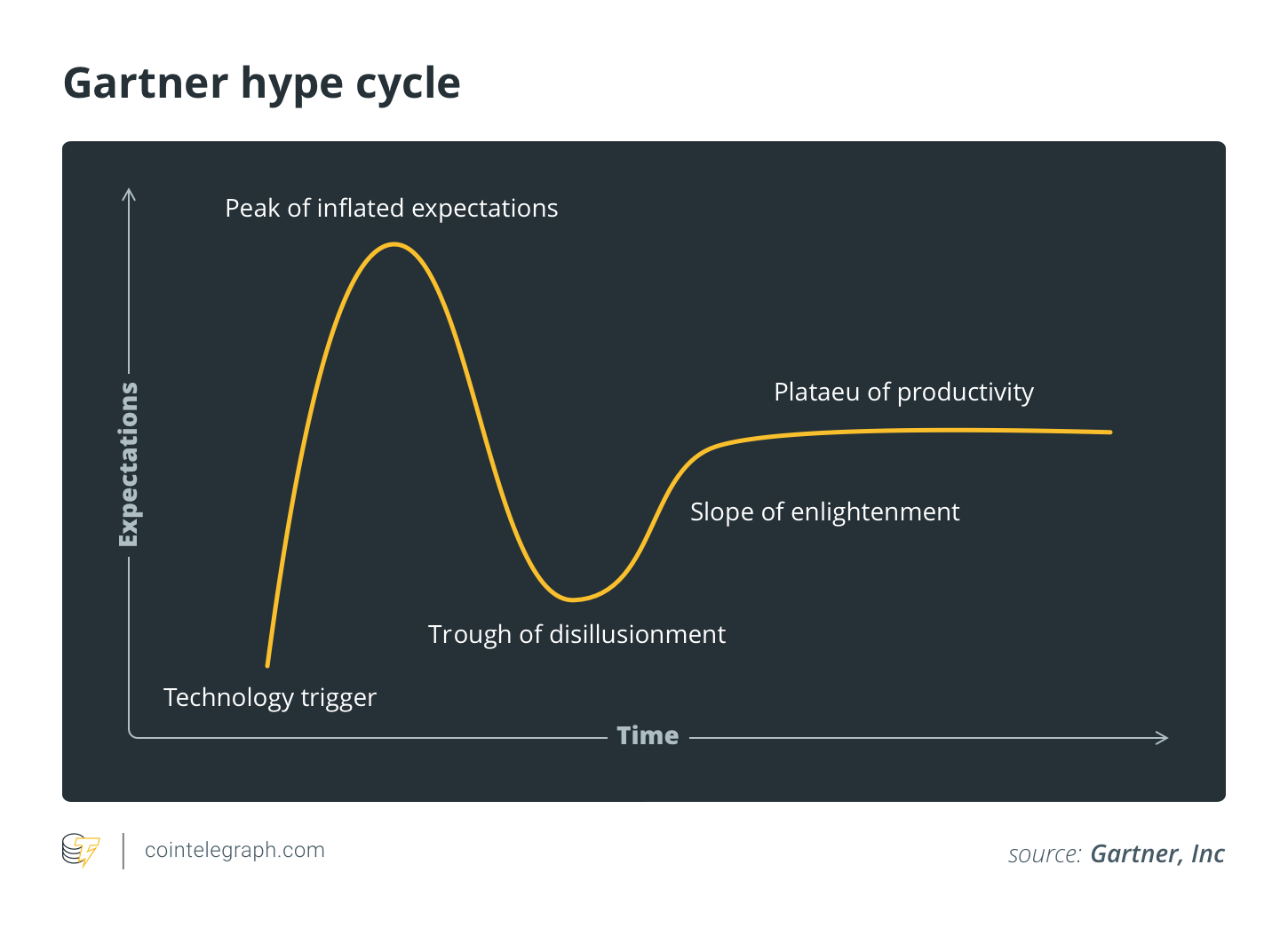 Mass adoption is also a lesson best learned from the recent history of the internet as to what the blockchain future holds. Clues from that revolution suggest that in order for blockchain technology to be embedded into the daily lives of users, it must have interoperability, easy navigation and most crucially, hyper-productivity.

Can blockchain survive the apocalypse

Let’s talk about the future then. Recent developments like that of Huobi are great examples of how the tides are turning in terms of digital currency patronage and usage. Huobi is China’s main player in their effort to create a “homegrown crypto-industry.” It’s the first crypto firm to have an in-house Communist Party committee, and the first blockchain platform in China to be backed by the state.

What do blockchain consultancies have to say about this? Matthew Graham, CEO of Sino Global Capital, suggests that Huobi’s tendency to mold itself to regulatory requirements might lead to a loss of trust with overseas clients. This relationship, however odd it might seem, might actually become quite a common occurrence in the near future. In fact, one of the predictions of the future of cryptocurrencies is that in 10 to 20 years’ time, governments are going to use the technology, attempt to control global money flow, and probably even succeed, if only for a while. And this will absolutely be against the founding principles of blockchain technology.

As Naval Ravikant summed up in his blockchain tweetstorm, a blockchain being controlled by “a sovereign, a corporation, an elite, or a mob” is an utterly nonsense idea. That’s because the fundamental philosophy behind the tech is that every person on it is equal in terms of access to power. Authoritarian governments might start using cryptocurrencies over which they have the sole control, in a bid to exercise holistic power over citizens both politically and financially. Decentralization is the key to acting as a check on the often-all-powerful systems in the world.

Here’s what other industry leaders feel about this important topic (listed in alphabetical order so as to not play favorites):

“Bitcoin is awesome, and when Lightning Network and OpenNode deliver, it will be easy to spread through payments. In fact, OpenNode claims that their Bitcoin network will be faster than Visas. Facebook is trying something great, but it will still be centralized, and less trusted than Bitcoin, which is decentralized. I think after OpenNode, Amazon, Apple, etc., will adopt Bitcoin rather than trying to go through the regulatory nightmare that Facebook is facing. JPMorgan is reacting the way many big companies react when they see that a new technology does a better job than they do with their customers. Merchants are going to go with Bitcoin. JPMorgan gets 2 ½ to 4% every time someone swipes a credit card. Merchants will no longer have to pay them once they start using Bitcoin. JPMorgan needs to figure out what they will look like in a post-banking world.”

“It’s the replay of the birth of the internet, which had a three-horse race for the future of the "information superhighway" we today call the internet. The lead players were Prodigy+Sears and AOL which represented the private internet. Tech giants like IBM, tried to sell you an Intranet. The third player no one was betting on, was the ‘public Internet’ with its clunky TCP/IP protocol. The same three horse race is happening today with governments like China issuing a digital currency on their own blockchain, the JPMorgans and Facebooks trying to convince you to run on their private Blockchain. The third, is the ‘public Blockchain’ which is quirky and unstable running on the Blockchain protocol. We know who the winner should be, but the Banks and governments are putting a much bigger fight this time as we are talking about ALL THE MONEY IN THE WORLD.”

“With Bitcoin and others, what we are seeing is open source commoditizing trusted financial infrastructure. What we know from understanding the most valuable companies in the world, is that lowering the cost of entry increases the rate and volume of innovation on top of the platform. Because these ecosystems develop network effects, large organizations unable to benefit from this innovation will be left in the dustbin of history.”

“The thing that got me so excited about Bitcoin in 2011 and the reason I thought it was revolutionary, was its potential to be permissionless money for the entire world. Being that its decentralized, means no one controls the network; transactions can't be censored, and there is no need for a third-party to process payments. If we are going to reach true mass adoption, we need for the UX to be better than existing systems, otherwise, people won't use cryptocurrencies. We have to make them more useful than Swish, Paypal, Visa, and that is what we are busy trying to do with Bitcoin.com.”

The future of blockchain depends on you

So… Is the future all bleak then, with these challenges to the egalitarian nature of blockchain technology? Not quite. Decentralized cryptocurrencies are also predicted to be growing as a parallel economy, backed by certain states and kinds of people. But shared, distributed transaction tech such as the blockchain is seen to have many competitors in the future, with AI supporting and generating these newer entrants. Ease of use will make cryptocurrency more accessible, and disruptive combinations of older systems and newer ideas will bring about the mass adoption of a blockchain technology that stays true to its fundamental self.

Above all, the tomorrow of cryptocurrency and blockchain depends on the paths they choose to follow today — much like humans, after all.

J.D. Salbego, the CEO of Legion Ventures, is a global leader in blockchain and digital securities with a history of working with industry-leading startups, crypto funds, institutions and governments to drive blockchain innovation, STOs/ICOs, crypto capital markets, international expansion, digital asset fund strategy and go-to-market frameworks. His work has been featured in Forbes, Business Insider and Yahoo. As a market influencer, speaker, published author and internationally recognized subject matter expert, Salbego is frequently invited to speak at leading conferences like the World Economic Forum, BlockShow and Delta Summit.