CFTC Probe of BitMEX a Result of Roubini Vs. Hayes Taipei Tangle?

BitMEX is reportedly in trouble. Does the CFTC’s investigation have a negative impact on the crypto market? Some analysts think it doesn’t.

Seychelles-based cryptocurrency exchange BitMEX is reportedly in trouble. Soon after Nouriel Roubini, a New York University professor of economics and anti-cryptocurrency pundit, criticized BitMEX of violating regulations, it was reported on July 19 that United States Commodity Futures Trading Commission (CFTC) is opening an investigation into BitMEX on whether it broke the law by allowing U.S. residents to trade on its platform.

A day later, an additional finding by London-based blockchain data provider TokenAnalyst revealed that BitMEX has experienced major Bitcoin (BTC) outflows to the tune of $73 million after news of the regulatory investigation surfaced.

The Tangle in Taipei and regulations

It may be possible to take a look at BitMEX’s stance on regulations from The Tangle in Taipei, the debate between an American economist Nouriel Roubini and BitMEX CEO Arthur Hayes on July 3. One of the topics they disagreed over is whether cryptocurrency exchanges should be regulated.

Speaking on BitMEX’s maximum 100x leverage, Roubini found it problematic that not only accredited investors but almost anybody can conduct high-risk trades on a platform that is unregulated:

“If the price moves even in 0.5%, you are wiped out of your position and guess what? There is a nice tweet called ‘BitMEX Rekt.’ [...] Every other second somebody has been liquidated by these guys and thousands of them have gone into financial ruin. Of course, this thing is not regulated anywhere. It is set up in the Seychelles.”

Roubini also suggested that U.S. investors are not allowed to conduct such kind of leveraged trading because of U.S. regulation, but “anyone with VPN can avoid the IP and go and do investments with you guys [BitMEX].” He concluded, “It is just an example of everything that is sick and rotten in this particular industry.”

The BitMEX CEO replied to this sentiment, after admitting that he doesn’t want to call Roubini a professor, and insisted that “it makes 100 times leverage, so what?” He continued:

“I don’t want to force anyone to use BitMEX. We just have a website and don’t do any marketing. Somehow a few thousand people have found a little oasis and started trading. [...] Roubini thinks New York DFS and New York AG is the only game in town.”

Being asked by Andrew Neil, a veteran journalist who hosted the debate, whether the regulatory authorities in the U.S. or the United Kingdom and the Seychelles are slightly different in scale, Aurtur replied, “It just costs more to bribe them.”

In addition to the fact that there was no live broadcast of the debate, Roubini was apparently not satisfied with Arthur’s answers regarding the regulations. On July 16, around two weeks after the debate, he wrote an essay entitled “The Great Crypto Heist” and insisted once more that BitMEX was violating securities laws and regulations.

Then, on July 19, Bloomberg reported on the CFTC’s probe of BitMEX. Although the probe would reportedly take a number of months, Mati Greenspan, a senior market analyst at eToro, suspected that the Tangel in Taipei might have motivated the U.S. to probe BitMEX. In his newsletter for his clients, Greenspan stated:

“Hayes is not acting as a representative of the crypto community and most of the critical arguments that he used were clearly in defense of himself as an alleged illegal casino operator and not the typical arguments one would use in favor of free and fair money.”

In his comment to Cointelegraph, Greenspan elaborated the point. At the Tangle in Taipei, Hayes defended Bitcoin in terms of financial privacy. But for Greenspan, it is not a typical argument people to use in defense of Bitcoin. He continued:

“Everyone already knows that Bitcoin is not a private currency. Bitcoin's star qualities are open, immutable, borderless, and censorship resistance. It gives you the ability to own a financial asset that no government or bank can take away.”

A spokesperson for BitMEX replied to a request from Cointelegraph for comment regarding the reports of a new investigation as follows:

“HDR Global Trading Limited, owner of BitMEX, as a matter of company policy, does not comment on any media reports about inquiries or investigations by government agencies or regulators and we have no comment on this report."

The U.S. and unregulated crypto exchanges

It may be worth noting that BitMEX is not the only major crypto exchange that is being pressured by U.S. regulatory authorities. In claims filed in April, New York Attorney General Letitia James asserted that Bitfinex defrauded its customers, having lost $850 million in client and corporate funds, and then attempted to cover up the loss by using the cash reserves of its sister company, Tether. While Bitfinex has tried to dismiss the case by claiming that it was not operating in New York, the attorney general claimed to have found evidence that it actually did.

Related: US a Crypto Exchange Scarecrow — What Needs to Change?

Meanwhile, U.S.-based Bittrex and Poloniex stopped offering several tokens in the U.S. due to the uncertain regulatory landscape. Moreover, as reported on June 14, Binance will be leaving the U.S. market by September 12. Instead, it is set to launch Binance U.S., a fully regulated fiat-to-crypto platform for the local market.

Impact on the market?

Since Bloomberg reported that the CFTC is probing BitMEX, the platform seems to have experienced an exodus of funds. As reported on July 20, BitMEX saw an outflow of $83 million worth of Bitcoin, while only $12 million came into the platform during the same period of 24 hours. Greenspan doesn’t believe that the reported investigation has affected the market negatively in any way. On the contrary, he thinks it should have a positive effect:

“The extreme leverage causes a lot of volatility. Large notional positions constantly opening and abruptly liquidating is a root cause of price instability.”

Possibly by coincidence, since the news broke on Friday, Bitcoin has been less volatile than usual, moving in a range between about $10,200 to $11,000. 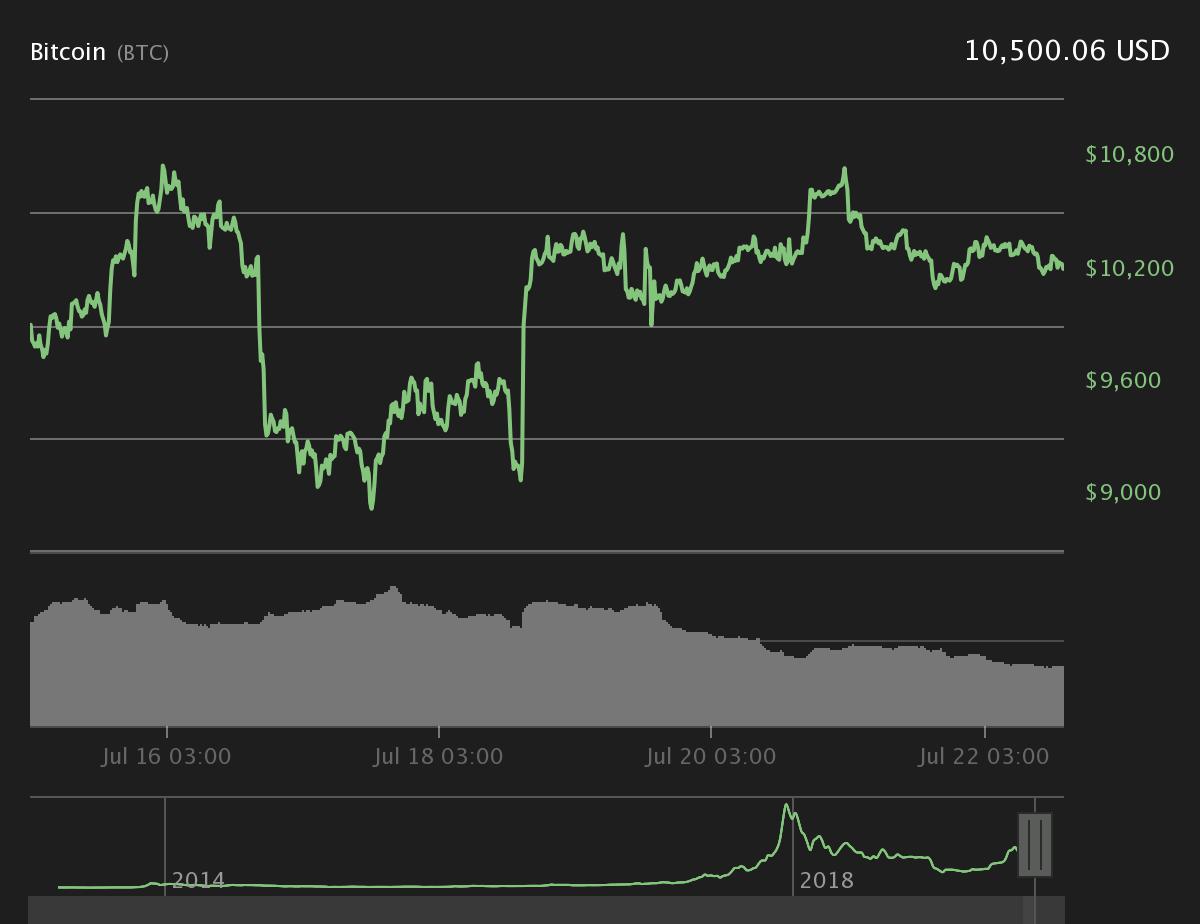 If the CFTC concludes that BitMEX has been violating the law by allowing American traders to use its platform, it could provide a significant shock to the industry. Together with the pressures on other major exchanges operating in the U.S., it may be a sign that the American government could well be gearing up for a crackdown on unregulated exchanges.