US a Crypto Exchange Scarecrow — What Needs to Change?

Half of the top-30 crypto exchanges try to avoid dealing with U.S., despite it being one of the biggest markets.

America is the land of opportunity, so long as you don't happen to be a cryptocurrency exchange. For several years now, a number of prominent exchanges have opted not to serve U.S. citizens; in fact, the list of trading platforms avoiding the U.S. is still growing, with Bancor recently announcing that it would block U.S. citizens from using its website to convert tokens.

As can be guessed, regulation — or rather, the lack of clear regulation — is the main reason why crypto exchanges are increasingly shying away from the U.S. Exchanges complain about the uncertainty of U.S. securities legislation, about the failure of legislators to respond quickly enough to the rise of crypto with corresponding laws, and about how the lack of a transparent regulatory framework is putting America's domestic cryptocurrency industry at a competitive disadvantage.

However, despite the relative hostility of the current regulatory environment, industry figures are hopeful that it's only a matter of time before the U.S. government and legislature come through with clear and workable crypto regulation. At the same time, Binance has just announced Catherine Coley as the CEO of its Binance.US platform. The selection of Coley, who has experience such as heading institutional foreign exchange at Morgan Stanley, demonstrates that U.S.-focused and regulatory-compliant exchanges may increasingly be the way to go as crypto enjoys more adoption and mainstream recognition. And with certain new exchanges also setting up in the U.S., it would seem that crypto is prepared to do what it takes to crack the American market.

A history of exiting

While the blocking of U.S. customers has gathered steam over the past few months, the first notable instance of exclusion occurred in August 2017, when Bitfinex announced that it would "be discontinuing services to our existing U.S. individual customers." Then the biggest exchange in terms of BTC/USD trading volume, Bitfinex blamed crypto-fiat banking difficulties for the decision, the likelihood that regulation could become stricter rather than more permissive, and the relative unimportance of U.S. customers for its revenues. The company’s press release declared:

"While we have been able to normalize banking for some corporate customers and individuals in certain jurisdictions, compliant banking solutions for U.S. individuals remain elusive. [...] We anticipate the regulatory landscape to become even more challenging in the future."

This move came roughly a year after Bitfinex suffered a notorious hack worth 119,756 BTC and around four months after Wells Fargo stopped processing outgoing wire transfers for Bitfinex's customers. It also followed suspicion regarding the status of Tether (USDT) and the failure of iFinex (which owns Bitfinex and Tether) to publish an audit of the stablecoin's reserves. Also, given that U.S. authorities and regulators had begun devoting extra attention to crypto exchanges at this time (as evinced by the indictment of the Russian owner of the BTC-e exchange in July), it also appeared as though Bitfinex was preemptively seeking to avoid any unwanted legal scrutiny.

However, as curious as this exit from the American market may have seemed at the time, Bitfinex certainly wouldn't be the last exchange to exclude U.S.-based customers, although it would take a while before another prominent platform followed its example. The first to do so was Poloniex, which stopped offering trades in nine cryptocurrencies to U.S. customers in May of this year, citing unclear securities legislation as its motivation. Then came Bittrex, which barred U.S. users in June from trading in 32 currencies, and was soon followed by Bancor, which excluded U.S. customers completely from its web-based platform.

There was also Binance, which announced in June that it would stop serving American customers as of Sept. 12. Of course, Binance is in the process of launching a U.S.-only exchange that is fully compliant with all relevant American regulations, so this isn't a complete withdrawal. Nonetheless, the fact that certain altcoins will become inaccessible to U.S. traders (even with U.S.-dedicated exchanges) indicates that America's regulatory environment is restricting its domestic cryptocurrency market and industry.

And aside from the exchanges that have pulled out of the U.S., there are also dozens of platforms that have always blocked U.S. customers. These include many of the biggest exchanges by volume, including OKEx, Huobi Global, LBank, HitBTC and Coineal. 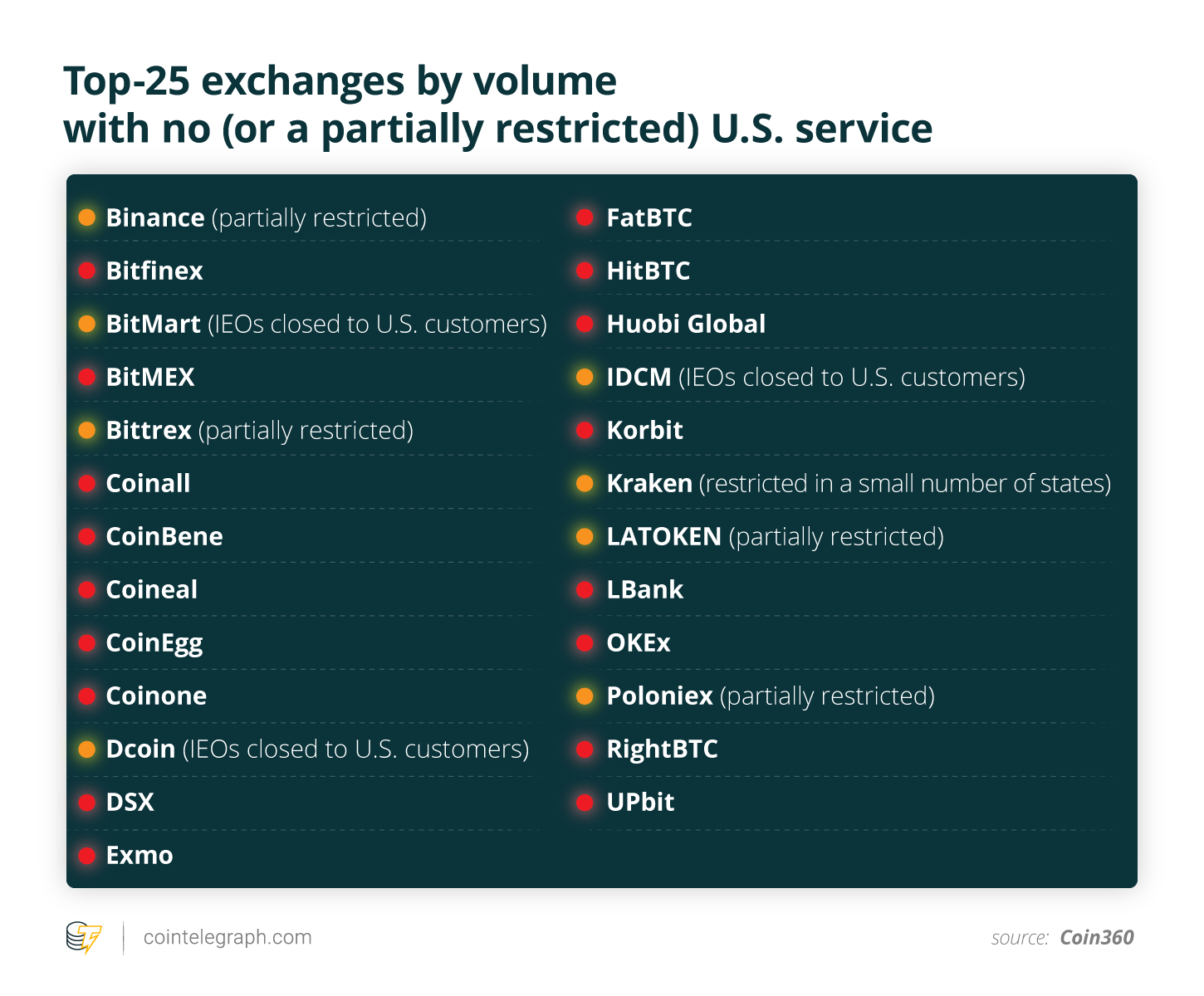 In other words, American citizens have a significantly reduced ability to access cryptocurrency, and according to many of the exchanges that have decided to restrict their services for U.S. users, this puts the American cryptocurrency industry at a disadvantage compared to other national crypto sectors. Gus Coldebella, the chief legal officer at Circle, which owns Poloniex, told Cointelegraph:

"There’s no question that the current regulatory approach to crypto in the U.S. breeds uncertainty and could harm innovation. We have advocated for a clear, forward-looking regulatory framework so the U.S. can realize the full potential of crypto and blockchain technologies. That advocacy will continue and will ramp up, especially now that Facebook’s Libra is causing many to reckon with crypto for the first time."

Other exchanges agree that, currently, the U.S. regulatory regime is not only too restrictive for cryptocurrency platforms, but also too ambiguous. This is essentially what Bancor declared in the press release announcing its decision to stop serving U.S. customers, even if it didn't highlight any particular regulation or aspect of American regulation that was ambiguous:

"In light of increased regulatory uncertainty, we believe that restricting U.S.-based users from executing conversions via our web interface is the most judicious decision for all members of Bancor's ecosystem at this time."

Crypto in the U.S.

On the other hand, some exchanges argue that the regulatory situation isn't that disadvantageous for the U.S. crypto industry, and that the picture is more mixed and nuanced than some protestors would have you believe. For example, Precious Kenneth W. — the CEO of decentralized exchange Dexage — told Cointelegraph that, even if American retail customers have been negatively impacted by U.S. regulations, institutional actors and investors have had more power to circumvent restrictions. She explained:

"Yes, in the sense that the vast majority of U.S. citizens have been affected, but the case is not so much the same with established companies with deep access to investors funds. These companies with the capacity to tap a liquid market may be able to bypass the restrictions placed locally with offshore investments."

Kenneth W. also doesn't entirely agree with the notion that U.S. lawmakers and regulators have been too slow to come through with updates to existing laws, or with entirely new laws or guidelines, not least because the industry is still very young. She continued:

"Blockchain laws & regulations will evolve in line with a jurisdiction legal framework, there is no uniformity or one-size-fits-all standard or approach. I wouldn't say they have been slow: the blockchain & crypto space is still evolving and the trajectory with technological innovation and regulation is that the former happens and the latter steps in."

However, when it comes to the matter of token sales, Kenneth W. concurs that current regulations are unclear, and that cryptocurrency startups and companies are avoiding the U.S. as a result, saying that "in the current situation, most ICOs are avoiding the U.S. basically because of what they see as either 'overregulation' or because they want to avoid the legal issues that may arise due to the erratic nature of cryptos."

It's arguable that the exchanges that have been pulling out of the U.S. have also been trying to avoid such legal issues, and that some may in fact be unwilling to satisfy regulations that have been created in order to protect consumers. But while this might be a valid argument for a minority of platforms, it's undermined by the fact that Binance is in the midst of setting up a fully compliant U.S.-dedicated exchange, while a number of other companies — such as eToro, Liquid and Riot Blockchain — have recently launched or are in the process of launching U.S.-focused platforms. This argument has also been denied by Circle's Gus Coldebella, who stated that Poloniex, at least, wasn’t seeking “lax” treatment in restricting its American service. Coldebella said:

"We can’t speak for other companies, but we would put our compliance with laws, our seriousness about safety and security of customer assets, our respect for licensing authorities, and our commitment to compliance up against anyone else in the space. So our desire is not for lax laws — it’s for smart ones."

Unsurprisingly, Poloniex and Circle believe that U.S. lawmakers have been too slow in acting, and, more importantly, in realizing that the cryptocurrency industry does indeed require its own specific legislation rather than simple incorporation within existing laws. "We’re on record talking about the need for laws to treat crypto differently, rather than understanding it through the nearly century-old securities framework, and only Congress may make that change in the U.S.," Coldebella added.

Even though this paints a fairly bleak picture of the present regulatory climate, the industry is generally hopeful that the situation will sooner or later change. And as Coldebella explained, there are already signs that this change is being set in motion: "Some U.S. lawmakers are tuned in to the opportunity in this space: for example, bipartisan legislation such as the Token Taxonomy Act would provide much-needed clarity, and some other members of Congress are considering other creative approaches."

Aside from the Token Taxonomy Act, a number of other potentially positive bills are currently being considered in the U.S. Congress, as detailed by the nonprofit Coin Center. These include the Blockchain Promotion Act, as well as the U.S. Virtual Currency Market and Regulatory Competitiveness Act, the latter of which has been drafted to "promote United States competitiveness in the evolving global virtual currency marketplace." So, assuming that the Token Taxonomy Act — which seeks exemption for digital assets from the Securities Act — and other similar bills are passed, this could create a regulatory framework in which more exchanges are encouraged to return to the U.S., or to set up operations for the first time in the country.

However, as things stand, it seems that at least as many exchanges are abandoning U.S. customers as are embracing them, as highlighted by the cases of Bancor, Bittrex, Poloniex, Bitfinex, Binance (to an extent) and others. This is potentially good news for any country or region that wants to become the world's crypto capital, but it's potentially bad news for the American crypto industry overall.