Crypto markets see mix of red and green this Saturday, with all of the top 10 coins by market cap experiencing a slight decline.

Saturday, June 16: after a slight rebound Thursday, crypto markets are experiencing a similarly slight decline, with all of the top ten coins by market cap down by one to three percent in 24 hours to press time. Bitcoin (BTC) is down about half a percent over the 24 hour period, trading at $6,530 at press time. The cryptocurrency has seen significant fluctuation this week, coming down from $7,623 June 10 to as low as $6,267 on June 13. Today, the coin has retraced some of those losses. Ethereum (ETH) is down by a similar margin, with a decline of under one percent over the past 24 hours. The leading altcoin is trading around the $500 threshold at press time. 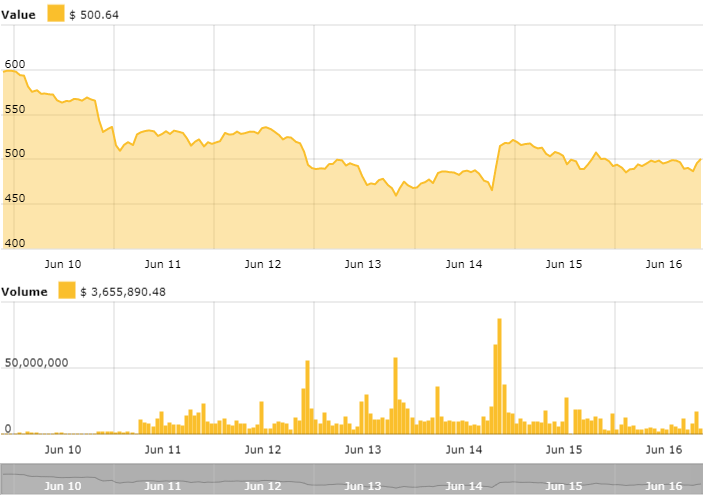 Total market cap remains somewhat low, currently at $277 billion, according to Coinmarketcap. Crypto markets have lost around $63 billion in total this week.

EOS is one of the more affected coins among the top ten: shedding about 3 percent in 24 hours to press time, it’s currently trading at $10.72. Today EOS Mainnet has experienced a “freeze”, resulting in some downtime. The leading block producers (BPs) of the network are reportedly working on a solution to the issue.

While the top ten coins are experiencing some downward pressure, there is a number of altcoins that are moving in the opposite direction.

Basic Attention Token (BAT) is up 2.8 percent, currently at $0.26. The coin, which is ranked 52nd by market cap, is developed by Brave, a company established by Brendan Eich, ex-CEO of Mozilla.