After a short-lived recovery attempt yesterday, the crypto markets have seen another slump today, with Bitcoin being a notable exception.

Saturday, Aug. 11: after short-lived recovery attempt yesterday, cryptocurrencies have suffered another slump today. Almost all cryptocurrencies are down by significant percentages, with Bitcoin (BTC) being a notable exception among the top 20 market cap, up under one percent on the day. 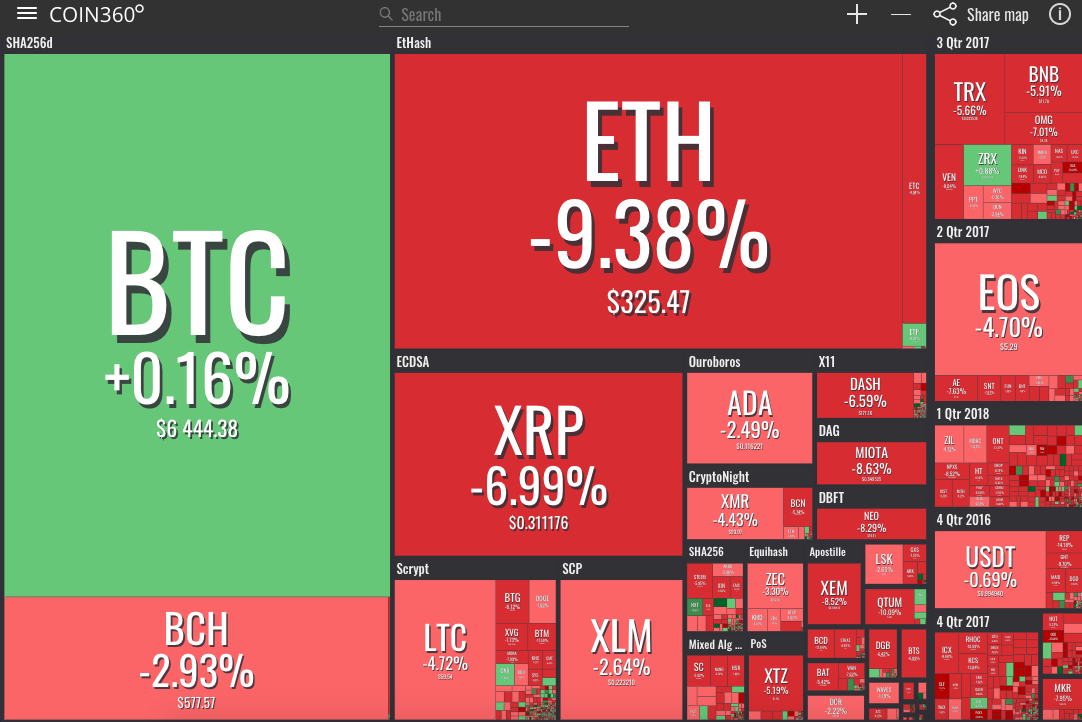 Bitcoin is trading sideways, up by about 0.1 percent over the past 24 hours. The cryptocurrency is at the $6,438 price mark as of press time, following a dip to as low as $6,051 earlier today. 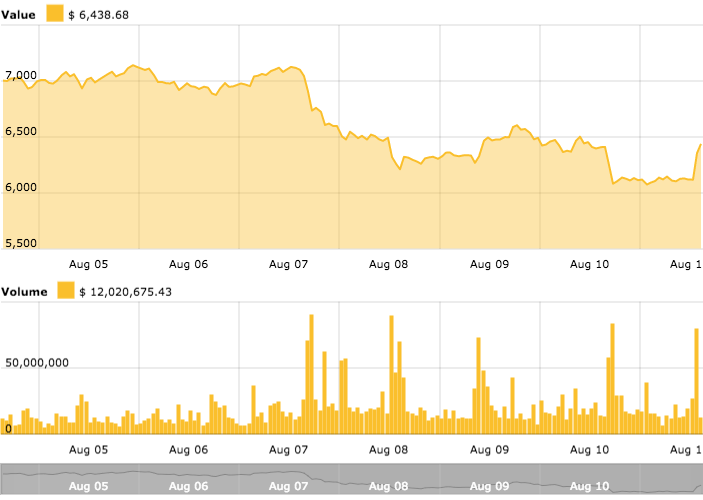 Unusually, the coin has experienced the heaviest losses among top ten coins by market cap on the day. Ethereum has lost 25 percent of its value over the past 30 days, and more than 50 percent over the past three months. 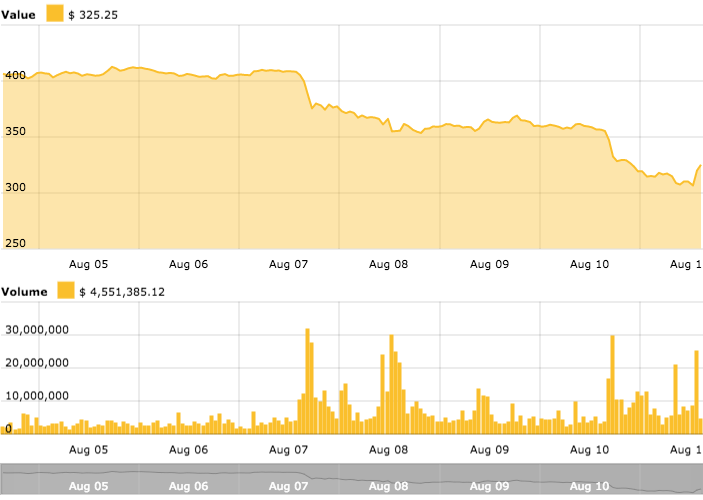 Among the top 20 altcoins by market cap, EOS and IOTA (MIOTA) have seen the largest losses over the past 7 days, according to Coinmarketcap. At press time, EOS is trading at $5.23, having lost around 25 percent of value over the past week, while IOTA is down 36 percent on the week, and is trading at $0.54.

Total market capitalization has dipped to as low as $206 billion today, but the markets have managed to retrace some of those losses, bringing the number to $216 billion as of press time. While the total market cap has dipped to levels not seen since mid-November last year, the number of all digital currencies has recently surpassed 1,800, according to Coinmarketcap. 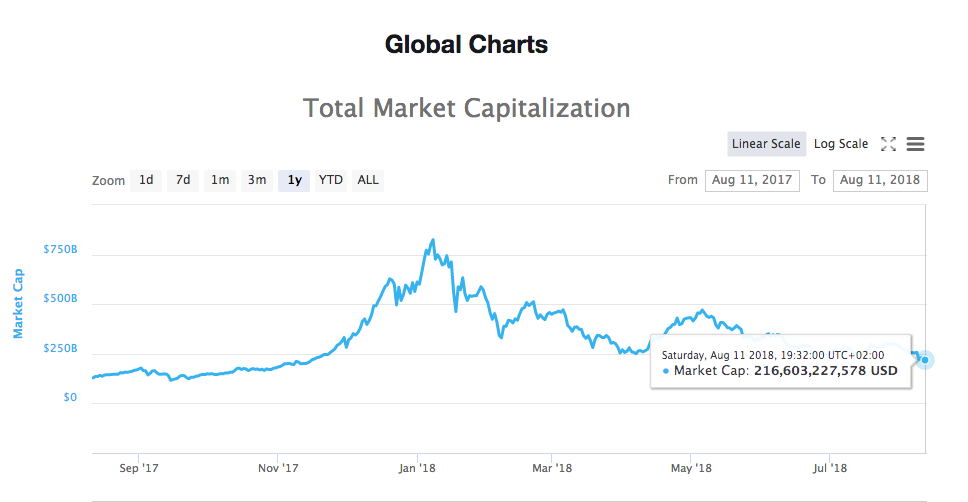 Today, Bitcoin’s share of the total market cap has reached 50 percent for the first time in 2018, as a result of continuous growth that began in May. For comparison, back on Jan. 1, Bitcoin’s dominance was around 37 percent. 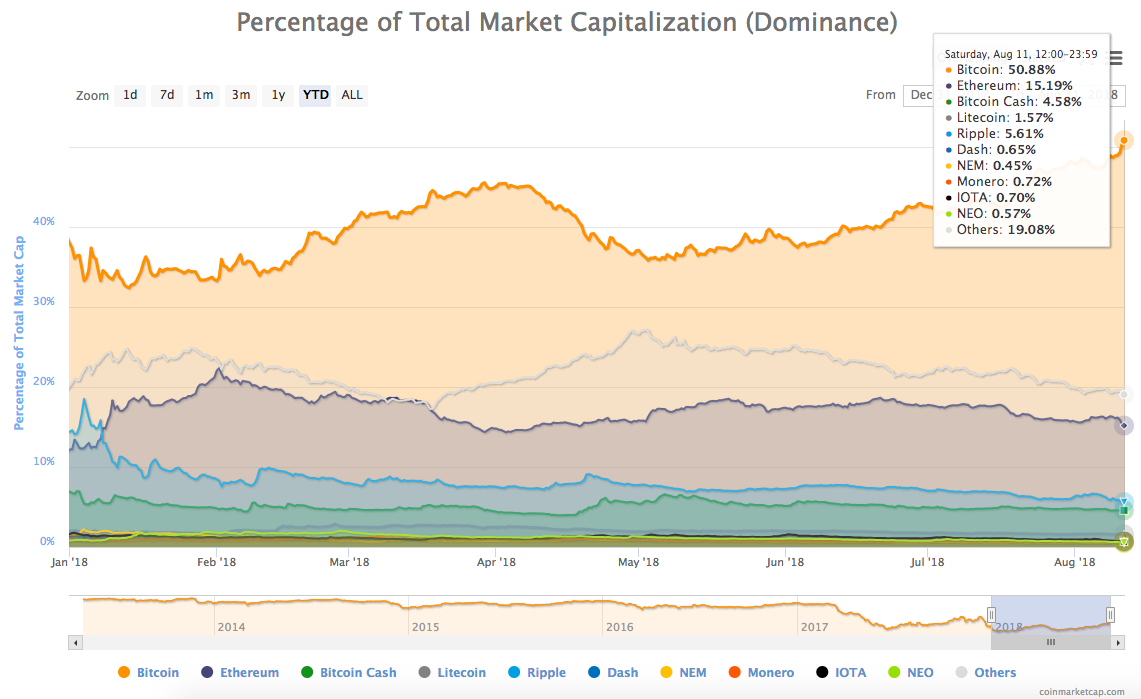 Earlier this week, Fundstrat’s head of research Tom Lee cited Bitcoin’s dominance as one of the most important factors of how the market is “reacting to what’s been taking place” in the industry.

On Wednesday, Pantera Capital CEO Dan Morehead claimed that crypto markets are reflecting some overreaction from the investors. According to Morehead, many have exaggerated the importance of the recent postponement of the U.S. Securities and Exchange Commission’s (SEC) decision on a Bitcoin exchange-traded fund (ETF) application by companies VanEck and SolidX.

In addition to recommending investors to focus on the Intercontinental Exchange’s (ICE) announcement of its own crypto platform, Morehead pointed out that Bitcoin is still up about 82 percent on the year, noting that "it's all perspective."