Data: US Traders Most Active Across Major Crypto Exchanges

New data suggests that U.S. traders are the most active across major crypto exchanges.

New data shows that United States traders are the most active across major crypto exchanges, according to a Feb. 4 tweet from data analytics firm DataLight.

The U.S. has the highest distribution of traders — 60 percent — on major crypto exchange and wallet Coinbase, while on Binance, Bittrex and Poloniex, U.S. traders make up 24, 27 and 28 percent of total crypto traders respectively. 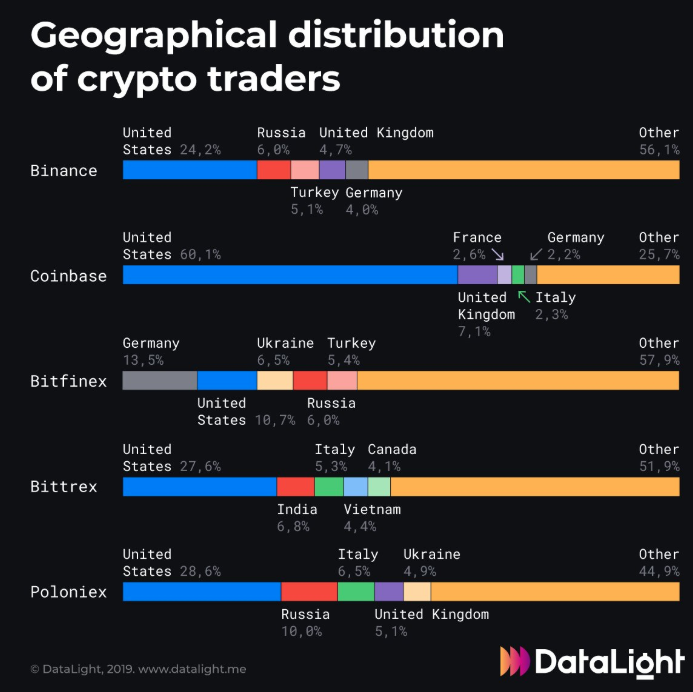 American traders are less represented on Hong Kong-based crypto exchange Bitfinex, at 10 percent of traders on the exchange, while German traders make up 13 percent.

Since the beginning of the year, trading records have been reporting lower numbers, according to a previous article by Cointelegraph. Coinbase was experiencing lows that they have not been seen since 2017, with the Bitcoin (BTC)/US Dollar (USD) market at allegedly around $1 billion in January.

As reported by Cointelegraph, Coinbase has recently added support for European Union residents to make fiat currency withdrawals to PayPal, after having released this service for its U.S. users in December 2018.