Fintech in the United Kingdom After Brexit

Many fintech companies chose London because of its strong financial regulation, but how will Brexit affect the industry in Europe and the U.K.?

The first round of negotiations between the United Kingdom and the European Union to determine their future, post-Brexit relationship took place between March 2 and March 5 in Brussels, Belgium. The outcome of these negotiations will shape the way the two work together following the end of the transition period, currently scheduled to extend through Dec. 31.

For the financial technology sector, the discussions surrounding the future U.K.–EU regulatory relationship as it relates to financial services will be particularly important to watch, as the outcome will determine how fintech services are bought and sold between the two. The negotiations also remind us that there are other policy domains — notably related to post-Brexit immigration in the U.K. — that will be important in determining the future size and shape of fintech. And given the U.K.’s widely acknowledged position as a global leader in fintech, it is not surprising that the outcomes will be important both within and beyond the United Kingdom.

In its “EY Global FinTech Adoption Index 2019” report, the Big Four audit firm Ernst & Young underlined that “FinTech is an industry that has evolved beyond its early stages to significantly move the dial on customer expectations.” The adoption rate over the course of five years for the six markets studied — Australia, Canada, Hong Kong, Singapore, the U.K. and the United States — has dramatically surged from 16% in 2015, to 31% in 2017 and up to 60% in 2019. The report added:

“Among developed countries, the Netherlands, the U.K. and Ireland lead in adoption, reflecting in part the development of open banking in Europe.” 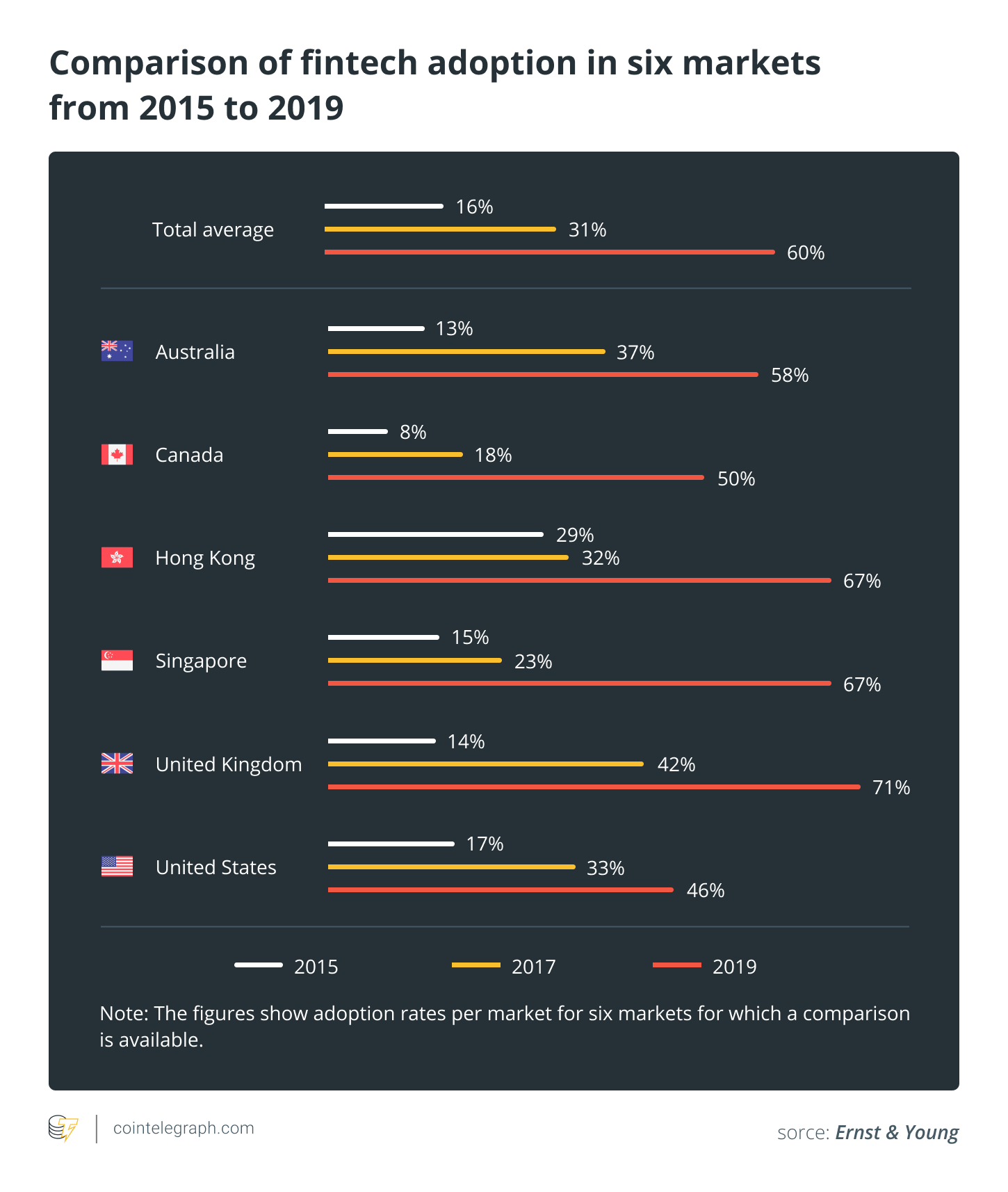 However, the regulation of cross-border fintech trade is at the heart of the current negotiations, and the outlook in this area remains uncertain. This policy area is particularly significant for fintech banks that used passporting arrangements between the U.K. and the EU to develop their U.K. presence. “Passporting” means that a financial services firm authorized to undertake activity by the regulator of one EU member state can apply for a “passport” that allows it to conduct the same business throughout the EU without the need for further authorization.

Related: FCA’s New AML Regime – UK’s Crypto Market Will Have to Adapt in 2020

However, these passporting arrangements will cease effective January 2021, once the transition period ends. From that point on, the U.K.’s relationship with the EU regarding financial services will be based on equivalence arrangements. Under these arrangements, the EU allows market access to foreign financial firms if it believes that their home country’s regulatory arrangements are equivalent to — or closely aligned with — those of the EU. However, equivalence is not the same as passporting, and several of the areas in which equivalence can be sought are not focused on securing single market access. As a result, equivalence remains a source of uncertainty within fintech and within financial services more generally. This continued uncertainty stems from three major issues:

First: The initial timetable of negotiations aimed to complete equivalence assessments by the end of June. While the U.K. has reiterated its desire to see this schedule remain, even if decisions were completed by December, the timetable is tight. Equivalence decisions can be made rapidly, but some have taken several years to conclude.

Second: There are 40 areas in which equivalence needs to be assessed, and it has not been granted in all areas to any country to date. That being said, since the U.K. is a member state until the transition period comes to an end, logic suggests its regulatory arrangements will satisfy the assessors.

Third: The issue that has attracted the most attention in the initial negotiation discussions is the fact that equivalence can be revoked by the EU with 30 days’ notice. Consequently, reliance on equivalence will not end uncertainty about the relationship between the U.K. and the EU. Any hint in the future that the U.K. is about to diverge from the EU regime could lead to revoking the equivalence assessment.

In response, the U.K. has focused its negotiating position on seeking what it terms the development of  “structured processes” for withdrawing equivalence, aiming to provide more certainty to the sector by insisting that the EU would need to follow a defined process for withdrawing equivalence. The EU negotiating mandate, however, reiterates its position that equivalence could be withdrawn unilaterally. How this difference in the operation of equivalence is reconciled will be important for the U.K.’s future relationship with the EU regarding financial services, including fintech.

There are some indications that the uncertainty surrounding the future U.K.–EU regulatory relationship following the end of passporting has impacted fintech firms working in retail banking.

For example, the German-based challenger bank N26 GmbH announced in January that it would be withdrawing from the U.K. market in April, citing Brexit as a factor. And in February, the fintech bank Revolut Ltd. announced that it would relocate its European payments activities to Dublin, Ireland. However, in a sign of continued uncertainty surrounding financial services after the transition period, it intends to keep its head office in London.

Beyond passporting and equivalence, the U.K.’s proposed post-Brexit immigration regime will also be important in shaping the future trajectory of fintech. Access to specialist labor with technology, financial and/or innovation expertise has been critical to fintech’s development. And this labor has by no means come exclusively from the U.K., hence the importance of the planned immigration policy to the sector. For instance, research surveys conducted in 2018 estimated that 42% of the U.K.’s fintech workforce was from overseas  — 28% from European Economic Area countries and 14% from non-EEA countries.

However, just because would-be fintech entrepreneurs could come to the U.K. under the new proposals, this of course does not automatically mean that they will. Migration decisions are always wrapped up in a whole host of wider political, economic and cultural factors, and these could yet pose challenges for securing the talent pipelines that fintech growth in the U.K. — and in London in particular — has relied on.

The fintech sector itself is aware of these challenges. It has increasingly turned its attention to how the U.K. education system — which is often criticized for the lack of numerate and entrepreneurial graduates it produces — could be reformed to improve and diversify the domestic supply of fintech labor.

This shows that, despite the policy uncertainty in key areas like regulation and immigration, the U.K.’s fintech ecosystem has the potential to adapt and respond to challenges. This is reflected in figures showing that in 2019, the largest number of fintech investment deals globally took place in London, and will be supported by the infrastructure provided to fintech in London in particular, but also in a growing number of regional centers. The dense clusters of expertise, skills and infrastructure in London will not disappear overnight at the start of next year. But it seems likely there will be a process of gradual change, some elements of which have already started to happen. The path and scope of this change will be shaped by the outcome of the current U.K.–EU negotiations, and they should therefore be followed closely by fintech as they develop over the course of the year.

Sarah Hall is a senior fellow at The UK in a Changing Europe and Professor of Economic Geography in the Faculty of Social Sciences, University of Nottingham. She is the author of Global Finance (Sage, 2017). She is currently researching the impact of Brexit on the U.K.’s financial services sector.