The top 20 cryptocurrencies are all in the green, two of them reporting double-digit gains, Bitcoin approaches over $3,300.

Sunday, Dec. 16: the top 20 cryptocurrencies are all in the green, seeing a mix of slight to solid gains, with Bitcoin (BTC) hovering over $3,200. 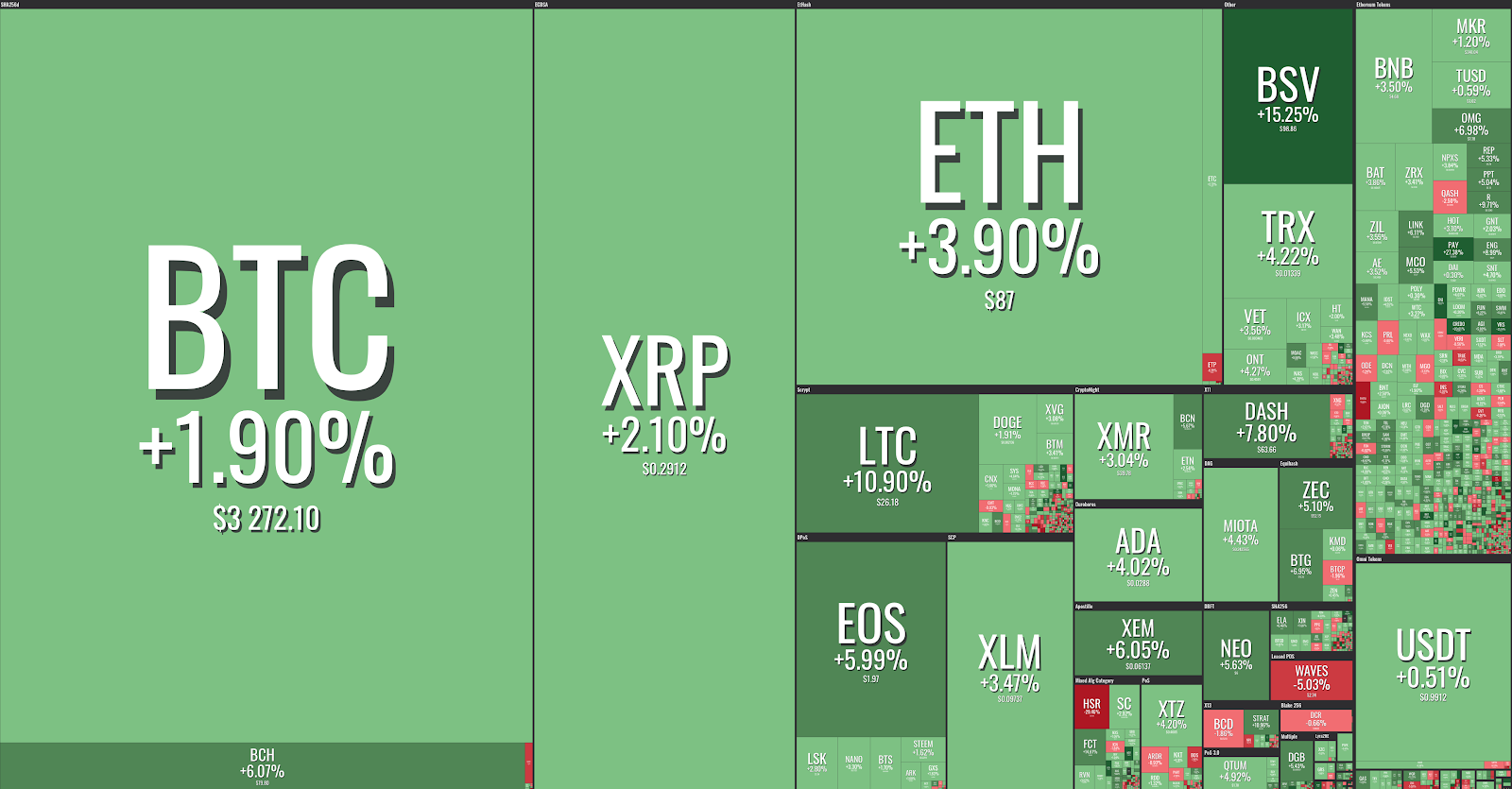 At press time, Bitcoin is up a little less than two percent over the last 24 hours. On the weekly chart, the current prices are slightly higher than the lowest point, registered on Dec. 15.

Ripple (XRP), the second largest cryptocurrency by market capitalization, gained over two percent in the last 24 hours. It started the day at $0.283 and is currently trading around $0.29, near its mid-day highest point of $0.294.

On the weekly chart, the current price is moderately higher than the lowest registered in the past seven days, equivalent to $0.282. Moreover, the current value is significantly lower than the $0.311 price with which XRP started the week.

Ethereum (ETH) remains the third largest cryptocurrency by market cap, gaining slightly less than four percent in value in the last 24 hours. At press time, ETH is trading just under $87, after having started the day around $83 and reporting moderate gains during the day.

On the weekly chart, the current price is higher than the lowest point of $83, but still notably lower than $95, the price at which ETH started the week.

Among the top 20 cryptocurrencies, some are reporting more notable growth. Bitcoin SV (BSV) is up just under 16 percent, while Litecoin (LTC) gained nearly 11 percent. Dash (DASH) registered a price increase of nearly 5 percent, while EOS (EOS) is seeing about 6 percent gains on the day to press time.

As Cointelegraph reported yesterday, Dec. 15, Stephen Pair, the CEO of crypto merchant platform BitPay, declared that he expects the mass adoption of blockchain for payments to occur in 3 to 5 years. He further noted that, when it comes to crypto, “adoption will push the prices higher.”

Pair’s statement is in line with what Jeremy Allaire, CEO of crypto finance company Circle, said to CNBC in a recent interview. Namely, when talking about Bitcoin, Allaire stated that he thinks “it is certainly going to be worth a great deal more than it is today,” within three years time.