Crypto markets have continued gaining momentum, with all top 20 coins in green and Bitcoin testing $4,000.

Tuesday, Feb. 19: crypto markets have continued gaining momentum, with all of the top 20 coins by market cap seeing green and Bitcoin (BTC) testing $4,000 again, according to CoinMarketCap.

Following a slight decline to as low as $3,908 yesterday, Bitcoin has continued growing towards the new price point, currently trading at $3,941 and up 4.4 percent over the past 24 hours. The biggest cryptocurrency saw a sharp bullish move on Feb. 17 and approached $4,000 yesterday by touching $3,973, the highest price point since Jan. 10. Bitcoin is up around 9.3 percent over the past 7 days.

Ethereum (ETH), the second-largest cryptocurrency by market cap, is up about 3.5 percent, approaching $150. Ethereum is seeing large growth over the week, up more than 22 percent since Feb. 12, when the altcoin was trading at around $121.

Ripple (XRP), the second-top altcoin by market cap, is up about 8.3 percent and is trading at $0.338, which constitutes around 12 percent growth over the past 7 days. Recently, BankDhofar, the second-largest bank by market value in Oman, has started using RippleNet tech for cross-border payments to India.

The fourth-top cryptocurrency by market cap, EOS (EOS), is seeing the biggest growth both over the past 24 hours and 7 days, up more than 15.7 percent over the day and about 30.5 percent over the week.

Total market capitalization has surged to $135 billion after having been stuck around $120 billion since Feb. 8. Daily trade volume has continued gaining momentum, currently seeing a slight decline from $36 billion to $35 billion. 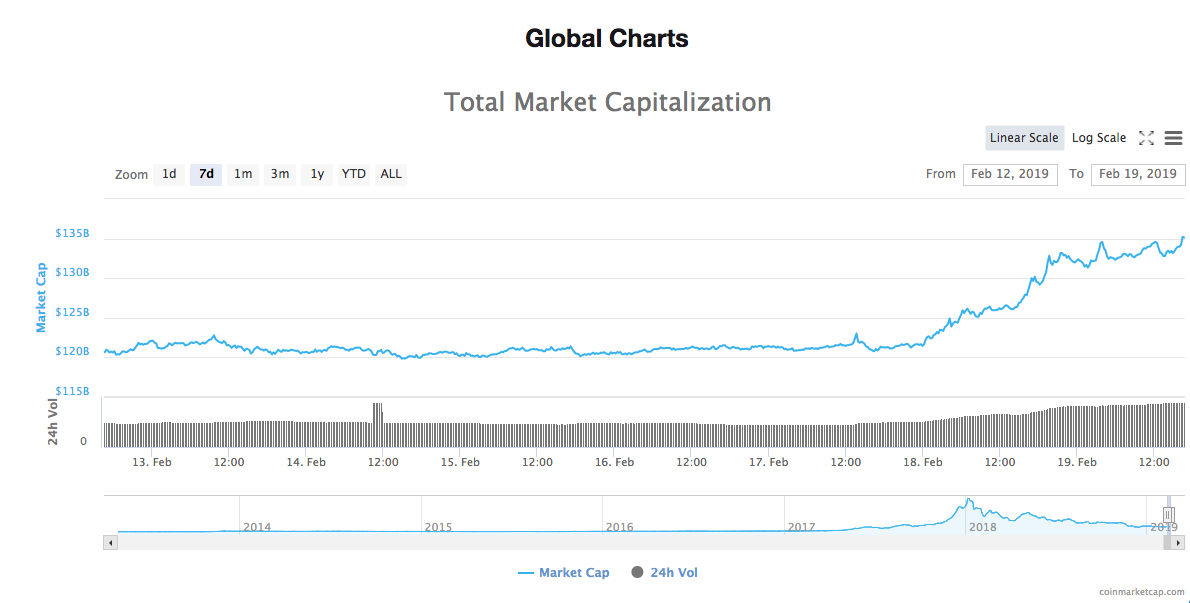 Also on Feb. 18, prominent Bitcoin bull and venture capital investor Tim Draper declared that in five years, only criminals will use fiat as crypto becomes universally widespread. Draper also argued that Bitcoin is more secure than the U.S. dollar, and compared cashing out from BTC with exchanging gold into shells.

Following the long President’s Day weekend in the United States, stock futures were flat to lower on Tuesday as traders waited for new data from the latest round of the U.S.-China trade negotiations, CNBC reports. According to data acquired by CNBC, the Dow Jones Industrial Average dropped about 20 points at the open, while NASDAQ and S&P 500 remained flat.

Meanwhile, oil stayed within sight of its 2019 high of almost $67 a barrel on Tuesday, supported by OPEC-led supply cuts although concern about slowing economic growth is expected to curb the demand.

As the U.S. dollar reportedly weakened on anticipation of the U.S. and China trade deal, gold prices increased to the highest level in more than two weeks on Monday, while palladium hit a record high of $1,449. U.S. gold futures increased by 0.3 percent to $1,326.1 an ounce.