Most of the top 20 cryptocurrencies are reporting slight losses as Bitcoin falls under $4,000.

Tuesday, March 26 — most of the top 20 cryptocurrencies are reporting slight losses on the day by press time, as Bitcoin (BTC) has fallen under $4,000 again. 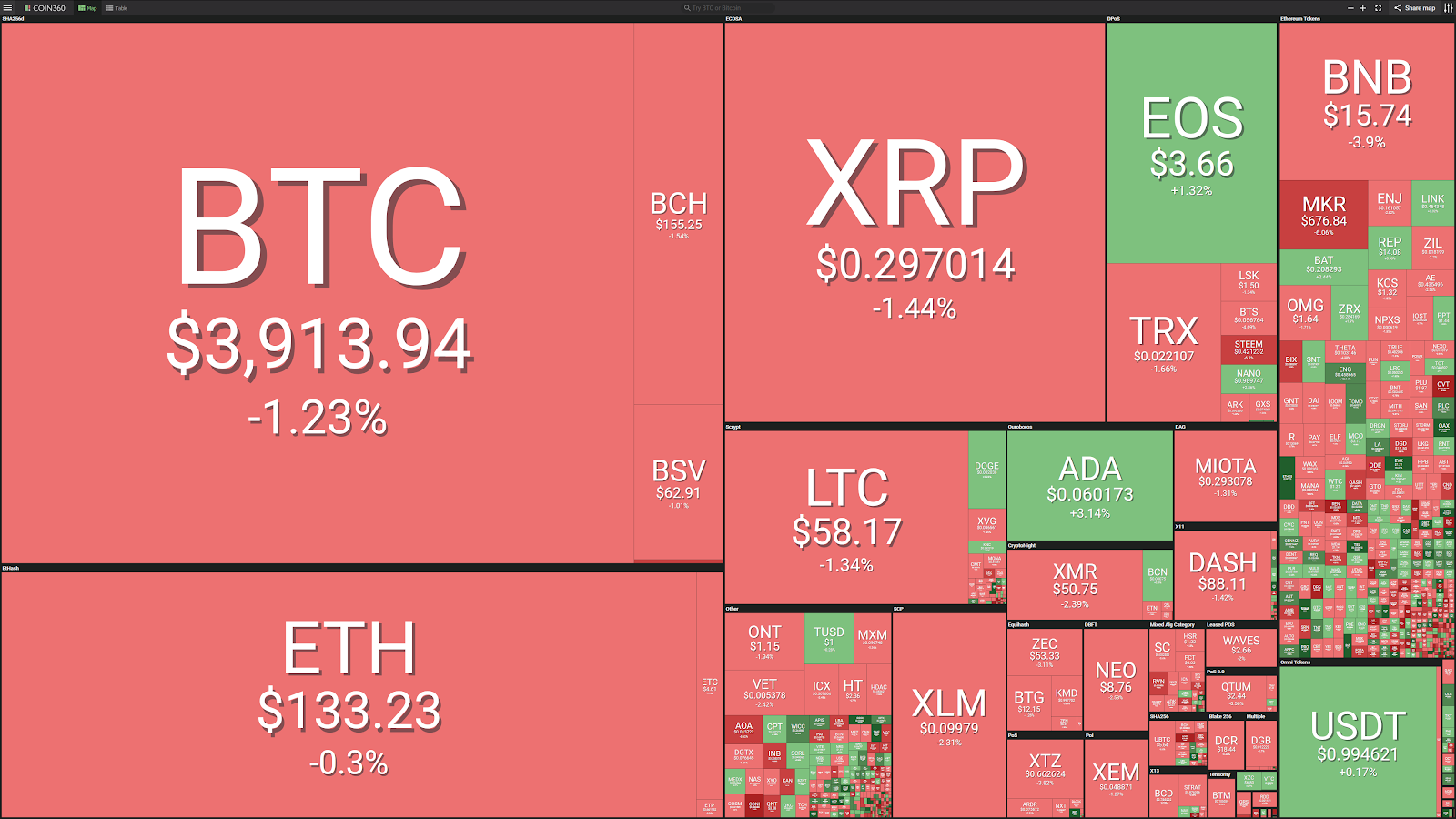 Bitcoin is down over a percent on the day, trading at around $3,967, according to CoinMarketCap. Looking at its weekly chart, the current price is over two percent lower than $4,060, the price at which Bitcoin started the week.

Recently, crypto bull Tim Draper has given advice to the president of Argentina to legalize Bitcoin in order to improve the economic situation in the country.

Ethereum (ETH) is holding onto its position as the largest altcoin by market cap, which is at about $14.2 billion. The second-largest altcoin, Ripple (XRP), has a market cap of about $12.6 billion by press time.

ETH is down by about one percent over the last 24 hours. At press time, ETH is trading around $134, after having started the day at $135 and reporting a mid-day low of $133. On its weekly chart, Ethereum has seen its value increase nearly four and a half percent.

As Cointelegraph reported yesterday, Ethereum co-founder Vitalik Buterin has argued that the crypto community should evolve beyond the individualism associated with its early cypherpunk days, and harness technology to create new, equitable and innovative systems with positive social impact.

Second-largest altcoin Ripple has lost about one and a half percent in the 24 hours to press time, and is currently trading at around $0.301. Looking at the coin’s weekly chart, its current price is over five and a half percent higher than $0.318, the price at which it started the week.

Among the top 20 cryptocurrencies, the only ones reporting gains are Cardano (ADA), which is up over two percent, and EOS (EOS), which is up about half a percent.

The total market cap of all cryptocurrencies is currently equivalent to $137.4, which is over two percent lower than $140.4 billion, the value it saw one week ago.

In traditional markets, the stock market is seeing discreet growth so far today, with the S&P 500 up 0.56 percent and Nasdaq up 0.65 percent. The CBOE Volatility Index (VIX), on the other hand, has lost a solid 5.51 percent on the day at press time.

Major oil futures and indexes are showing mixed movements today, with WTI Crude up 1.84 percent, Brent Crude up 0.84 percent and Mars US down 0.19 percent. Opec Basket is also down by 1.64 percent, and the Canadian Crude Index has seen its value increase by 2.26 percent, according to OilPrices.