Bitcoin futures trading at the CME has continued to grow in Q3, with average daily trading volume up 41% over Q2.

Bitcoin (BTC) futures trading at the Chicago Mercantile Exchange (CME) has continued to grow in Q3, the U.S.-based exchange reported in a tweet Wednesday, Oct. 17.

The CME has revealed that the average daily trading volume (ADV) of Bitcoin futures has increased by 41 percent in Q3 over Q2, while open interest (OI) — or the number of open contracts on Bitcoin futures — has risen by 19 percent in the third quarter. 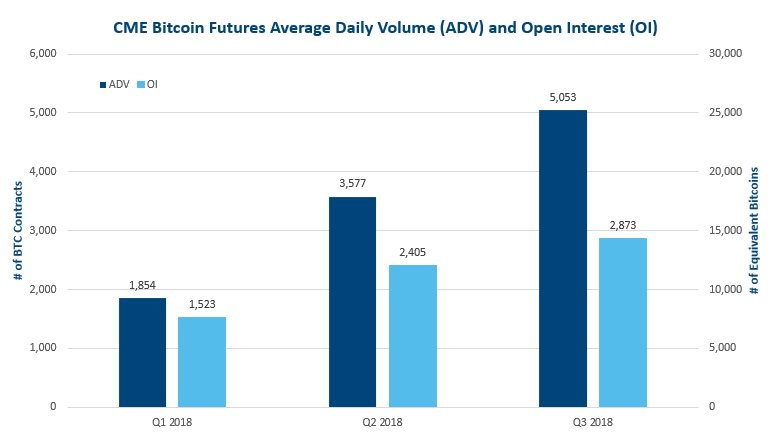 Compared to the results of the second quarter over the first quarter, the trading dynamics have now been growing at a slower pace than in Q3. On July 20, the CME reported that Bitcoin futures trading in Q2 had seen a large increase, with ADV and OI up 93 and 58 percent over Q1, respectively.

CME Group is one of the biggest global exchanges and the largest options and futures contracts OI of any futures exchange in the world. The company had also launched Bitcoin futures trading on Dec. 17, 2017, shortly after the launch of BTC futures by the Chicago Board Options Exchange (CBOE) on Dec. 10.

In early October, crypto analyst and host of CNBC’s show Cryptotrader Ran Neu-ner had predicted that Bitcoin price is “about to explode” in the wake of the upcoming decision on several Bitcoin Exchange-Traded Fund (ETF) applications by the U.S. Security and Exchange Commission’s (SEC).

In his prediction, Neuner compared ETFs with Bitcoin futures, claiming that the expectation of BTC futures contracts allegedly made the major cryptocurrency rally last year from “$6,691 (Nov. 11) to $20,000 (Dec .17).”

Recently, Bloomberg reported that the CME was not planning to introduce futures on any cryptocurrencies other than Bitcoin in the near future. Terry Duffy, chief executive officer of CME, had reportedly revealed that the company should first work on the approach to Bitcoin futures, since it “might have been the most controversial launch of a product.”

Earlier this year, the Federal Reserve Bank of San Francisco alleged that a sharp decline in the  crypto markets in 2018 had been caused by the Bitcoin futures launch. The bank stated that it considered that the “subsequent fall in the price” after BTC futures trading did not appear to be a “coincidence.”