Crypto Markets Keep Fluctuating: Most Top 20 Coins Back in Green, Bitcoin Above $6,700

Crypto markets see another recovery attempt, with all of the top 20 coins by market cap in the green, and Bitcoin over $6,700.

Monday, August 27: crypto markets have seen another recovery attempt, with all of the top 20 coins by market cap in the green, according to data from CoinMarketCap.

After suffering a slump yesterday, crypto markets are back to green, with IOTA (MIOTA), Cardano (ADA), and EOS (EOS) seeing the biggest gains among the top 10 coins, while Bitcoin (BTC) has broken back above the $6,700 point. Most of the top ten coins are seeing only slight gains between 1 and 2 percent on the day.

The top cryptocurrency Bitcoin is trading at $6,744 at press time, up less than half a percent over the past 24 hours, but seeing weekly gains of about 4 percent.

Top altcoin Ethereum (ETH) has experienced similarly modest growth today, with its price up just under one percent over the 24 hour period. Ethereum is trading at $275 at press time, up 1.5 percent over the past 7 days, but down a jolting 41 percent on the month. 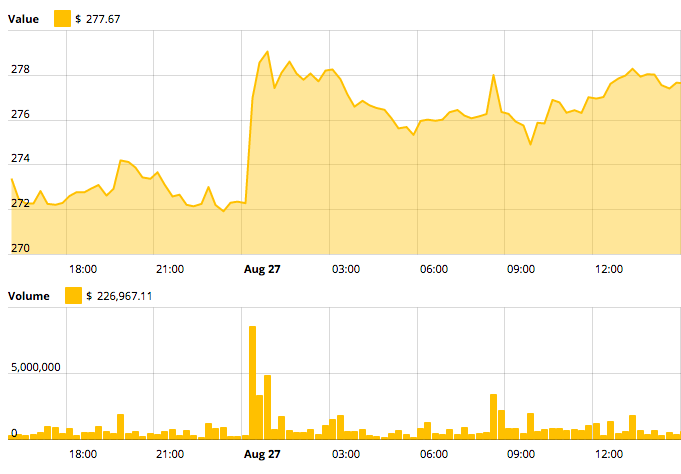 Total market cap is showing growing momentum today, up from $214 billion at the beginning of the day to almost $219 billion at press time.

Of the top ten coins by market cap, IOTA is up the most with 8.3 percent growth, trading at $0.60 at press time. The altcoin’s price has surged over the past two days following recent news of IOTA’s partnership with Japanese tech giant Fujitsu, which stated that the partnership sought to “help roll out IOTA as the new protocol standard.”

Major stablecoin Tether (USDT) is one of the only coins in red on CoinMarketCap out of the 20 top cryptocurrencies. Yesterday, Cointelegraph reported that recent issuances of the controversial cryptocurrency are not affecting the prices of either major coins or smaller altcoins at the moment, following previous allegations on “market manipulation” practices using Tether.

Earlier today, Cointelegraph reported that Chinese tech giant Baidu was following the anti-crypto policies of Tencent and Alibaba, having closed at least two popular crypto-related chat forums. The move is another step in the unfolding events of anti-crypto measures underway in China.

Also today, multiple Indian media reported that the country’s central bank the Reserve Bank of India (RBI) is planning to improve its knowledge of cryptocurrency and blockchain technology in order to “to check what can be adopted and what cannot.” The news follows RBI’s ban of servicing crypto-related businesses from April 2018.