After a wave of green yesterday, crypto markets see another decline, with Bitcoin barely holding on to weekly gains above $6,600.

Sunday, August 26: after a short recovery yesterday, crypto markets have again declined somewhat, with only three out of the top 10 cryptocurrencies by market cap seeing green today. 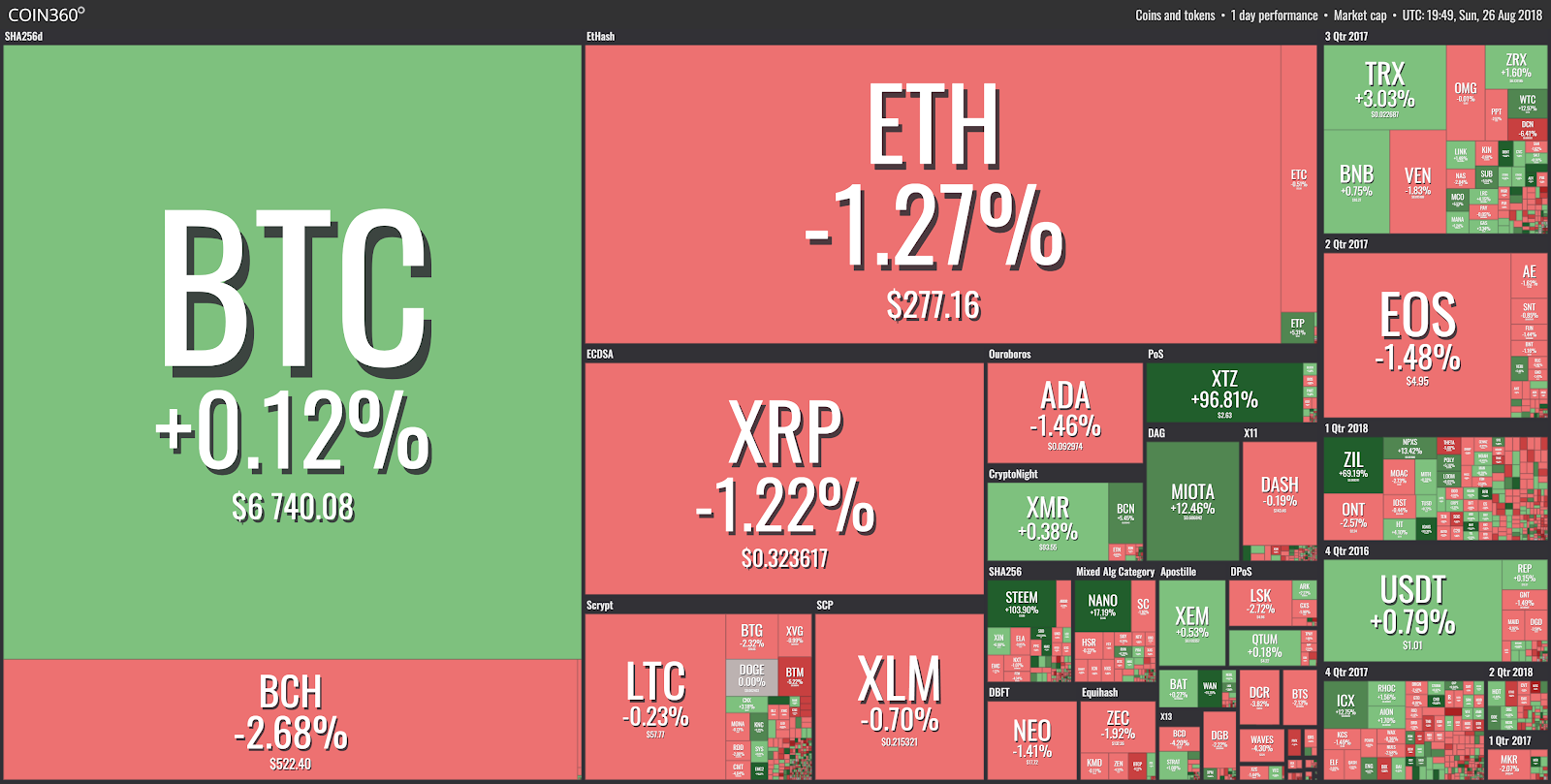 Bitcoin (BTC) is one of the fortunate ones, up less than one percent on the day, trading at $6,740 as of press time. The cryptocurrency also has managed to hold on to its weekly gains, which comprise 2 percent. Having peaked at $6,778 yesterday, Bitcoin dropped to as low as $6,587 earlier today. 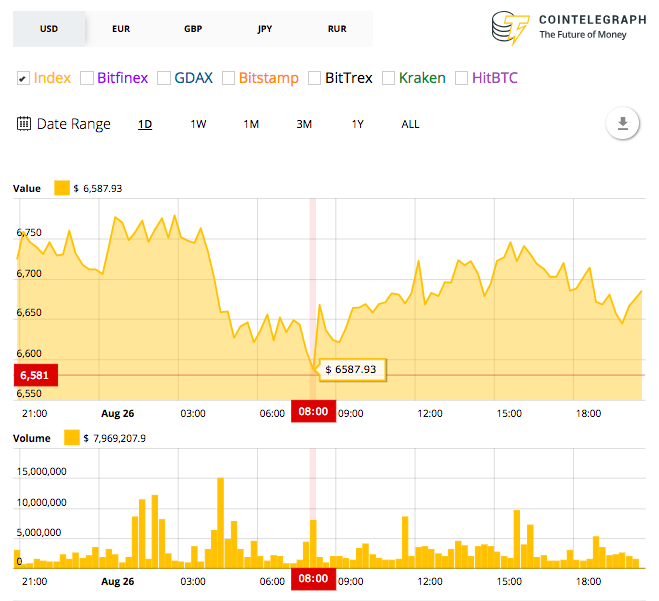 After surging to around $282 yesterday, Ethereum (ETH) is now 2 percent down to trade at $272 as of press time. 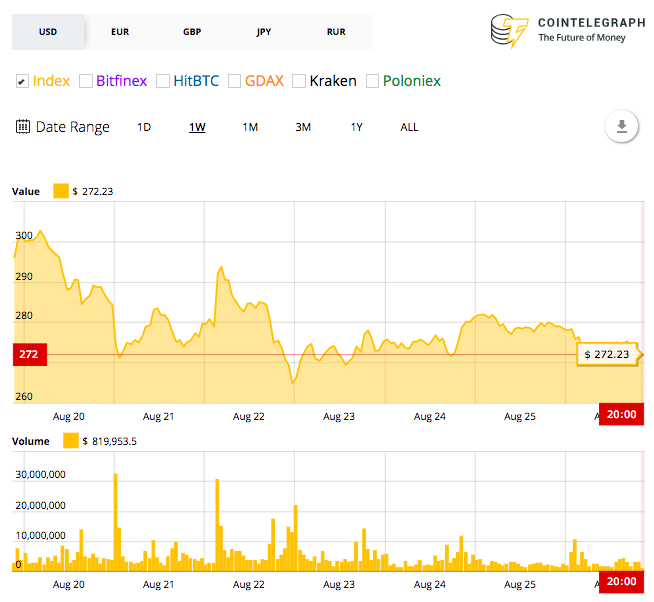 The total market capitalization of all coins has increased somewhat over the past 24 hours. After hitting an intraday low of $212 billion, it is currently at $218 billion, up from yesterday’s high of $216 billion.

Bitcoin keeps increasing its dominance over the market, with its share of the market amounting to 53.3 percent at press time, up from 51.5 percent a week ago. 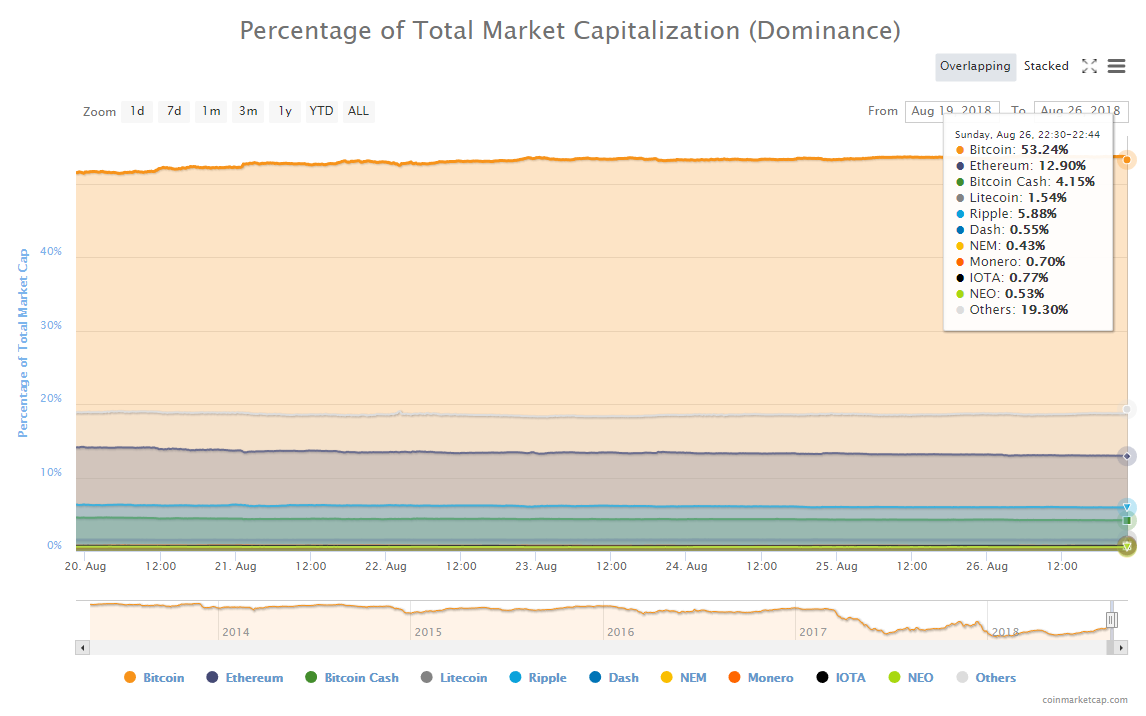 IOTA is the only cryptocurrency out of the top ten by market cap to have grown by more than  one percent in 24 hours to press time - in fact, it has gained as much as 12.5 percent, to trade at $0.60.

In terms of weekly gains, one of the biggest winners is Tezos (XTZ), up a whopping 97% on the week and trading at $2.64 at press time.

Yesterday, Fundstrat’s Head of Research Tom Lee said in an interview with CNBC that the cryptocurrency “could end the year explosively higher,” citing a correlation between it and emerging markets, and claiming that he still believes that Bitcoin could hit $25,000 by the end of 2018.

According to Lee, the “tide is changing” for both Bitcoin and emerging markets, especially if the U.S. Federal Reserve slows down its interest rate hikes.