‘World’s first’ blockchain phone launches, as Sirin Labs outlines plans to bridge the gap between crypto and the mass market.

After months of expectation and one of the top-five biggest ICOs of 2017, on Nov. 29 Sirin Labs has launched Finney, the 'world's first' blockchain smartphone. Yet, even with the endorsement of football legend Lionel Messi and a $157.8 million token sale behind it, the $999 device has stepped into uncharted territory, where its built-in cold storage wallet and DApp ecosystem will have to contend with the dominance of Apple and Samsung — as well as the Exodus 1, a rival blockchain smartphone from HTC.

Most of Finney's key features had already been announced prior to Thursday's launch: The smartphone comes equipped with an embedded cold storage wallet that's physically separate from the main hardware; its Sirin OS is a "Google-certified" mod of the Android operating system; it boasts AI-driven, cyber-threat detection; and it enables the direct exchange of selected cryptocurrencies (Ethereum, Bitcoin and Sirin Labs Token) without the need to use a centralized exchange.

But at its launch event in Barcelona, Sirin Labs provided more concrete details as to its wider aims and expectations for Finney, revealing that the smartphone is just the beginning of its plans to bring blockchain technology to mobile devices.

Most of all, the Israeli company used the launch event to emphasize how Finney is a smartphone that makes blockchain technology more accessible to a mainstream audience and that provides diehard crypto enthusiasts with a more practical way of securely managing their coins.

“This is the most important computer of our generation — smartphone.”

By having a cold storage wallet, a Token Conversion Service and crypto-exchange apps on a single device, Hogeg affirmed that Finney will take "a huge step forward in bridging the gap between the blockchain economy and the consumer market," making the world of crypto more accessible to an audience that doesn't necessarily have the time or inclination to sign up for Kraken or Coinbase on their PCs and then buy a Ledger or Trezor wallet. 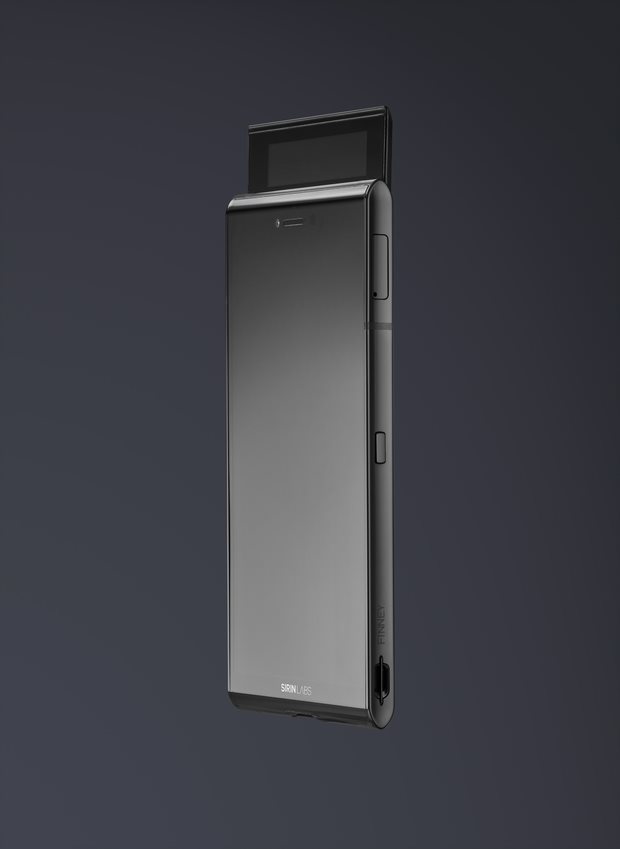 Another, more predictable facet of Sirin Labs' plan to attract a mass market is that Finney comes with all the specs and functionality you'd expect from a 2018 smartphone. The phone has a 12MP (megapixel) rear camera, an 8MP selfie camera, as well as a 6-inch touchscreen, 6GB of RAM and 128GB of storage memory. This puts it at least in the same league as this year's iPhone XS, which also has a 12MP rear camera (albeit a dual one), but actually a smaller, 5.5-inch screen, 4GB of RAM and a 7MP selfie camera.

The fact that it boasts performance superiority in several departments here would help make the phone desirable to someone who may have been thinking about buying a separate hardware wallet and an iPhone XS (or Samsung Galaxy S9) — and just as importantly, so too will the ease with which its main features (the hardware wallet and DApp store) can be used.

The process of transactions is quick and painless, involving the physical opening of the wallet (which is slid upward from the top of the phone) and a few taps of its touchscreen, as well as a few taps on the smartphone’s display (e.g. to choose which kind of transaction you want to make). One nice feature is that Finney enables the user to easily compare the addresses and transaction amounts shown in both the wallet's screen and the phone's, something which ensures that they won't end up sending coins to the wrong recipient as a result of a hack or bug.

Yet, Sirin Labs is aiming with Finney to make cryptocurrency more accessible and popular in a number of other ways. First of all, the company famously recruited Lionel Messi to be Finney's brand ambassador back in 2017, hoping that 'the GOAT' and ‘a hacker on the camp’, according to Hogel, would be the best person to make Finney — and crypto — much more visible to a mass market.

"I think security and privacy is the number one priority right now. For everybody it's important, because we have all our content, all our lives on mobile phones […] Privacy is very important now more than ever, because right now there are lots of hackers, and people can steal your identity or your money."

Added to Messi's enviable reputation, Sirin Labs revealed that Finney will make crypto more accessible through the smartphone's dCENTER. Not only does this feature provide users with a DApp store for decentralized, crypto-related applications, but it actually rewards them with SRN Tokens for engaging and spending time with the apps it offers. Moreover, Hogeg claimed that owners can claw back around $300 of the phone's asking price by engaging with all of the apps available at launch.

The company is referring to this program as 'Earn and Learn,' and in conjunction with the outreach-focused concept stores due to open in December in London and Tokyo, it shows how Sirin Labs hopes that the smartphone will serve as a champion for the wider cryptocurrency industry, and not just Sirin Labs itself.

"Our entire concept is to bridge the gap," Erin Brazilay — Sirin Labs' Chief Commercial Officer — explained to Cointelegraph. "And as such, we're going to open concept stores in London and Tokyo and other places. Our stores will be kind of an academy for the blockchain community; all the staff will be trained at the highest level, so people in the community can come and ask questions [about blockchain and cryptocurrency]. So that even someone who is a first-comer can come and get the full understanding of how the technology works. And there is nothing like that in the market."

The company is also releasing Finney with its own blockchain-focused operating system, Sirin OS, which it ambitiously aims to take beyond its own hardware. "We have decided to develop the Finney, the first blockchain phone that runs Sirin OS. But this is only the beginning of the execution of our vision. Our vision is that every Android-based device would run Sirin OS. We are hoping for other OEMs [original equipment manufacturers] to adopt the Sirin OS and join us in the blockchain revolution."

In other words, Sirin Labs doesn't simply want to make blockchain phones, but to produce the platform for cryptocurrency and blockchain applications, becoming a kind of ‘crypto Google.’ If it can get a crypto-oriented operating system on, say, a Samsung, Huawei or HTC phone, then it will go a long way in making crypto mainstream, and this is why Erin Brazilay affirmed that Sirin OS is "at least" as important as Finney to Sirin Labs' longer term strategy: "We need to put a lot of pressure on the OEM side, to convince them to adopt Sirin OS as the standard, de-facto technology to enable their phones to be blockchain-enabled."

As can be imagined, Sirin Labs is hopeful for Finney's future. Aiming to ship 100,000 units of the smartphone within one year, it's already accepting orders for the device on its website — and in January, the phone will also be available to buy via the Amazon Launchpad platform.

However, other voices and industry figures are skeptical that the smartphone will have much of an impact outside of cryptocurrency circles. Speaking to Cointelegraph, Gartner's senior principal analyst, Tuong H. Nguyen, believes that it will appeal mostly to "tech savvy" individuals and "early adopters."

"I would question the ability for this device to achieve mass market success. The broader question I think you’re asking is 'what is the appeal/must-have functionality that this 'blockchain phone' is providing?' The storage wallet applies to a niche segment of the mass market. Not only would it be appealing to the few people who own crypto, but it goes a niche deeper by trying to convince these few people they need a phone that specifically does this (put another way, why wouldn’t I buy a phone from a larger, more well-known OEM with tons of features — more than I would likely use — minus the crypto features?)"

Not only does Sirin Labs have to contend with the possibility that Finney might appeal only to a "niche segment" of the market, but it also has more than one competitor in the blockchain-phone sector.

For one, HTC is due to release the Exodus 1 in December — and like Finney, it's a high-end smartphone that features a cold storage wallet, although it is currently $39 cheaper than Sirin Labs' offering. And on top of HTC, there's one other manufacturer of a blockchain phone, Pundi X.

Back in October, the India-based blockchain payment provider announced its very own "XPhone," a smartphone due in Q2 2019 that can transmit phone calls, texts and mobile data using blockchain nodes, thereby avoiding the need to use centralized mobile networks. And as the company's vice president, Peko Wan, claimed to Cointelegraph, this ability to provide basic phone services via decentralization makes it more of a blockchain phone than Finney.

"What makes the XPhone unique is that it actually uses a blockchain-based protocol for communicating data, making calls, sending messages and more. That means users communicate with each other securely and independently of a central carrier via nodes. We will stand by the uniqueness of the way in which we have reinvented blockchain for use as a transmission protocol for telephony and data of all kinds. In every sense, we have built a true blockchain phone."

Regardless of such opinions on whether it is a 'true' blockchain phone or not, what is clear is that, with Finney, Sirin Labs has taken an important step for the cryptocurrency industry. Within the space of a year, it has delivered on a massive ICO by releasing a high-performance and secure product that will provide actual utility and value to its users. This is something not many blockchain projects can claim to have done, and while it's hard to predict just where the future will take Finney and Sirin OS, it can only be a good thing that the crypto industry has finally begun producing gadgets all people can use.