From Blanket Ban to Its Own Stablecoin: How Facebook’s Relationship With Crypto Changed Over 2018

Facebook is now making a stablecoin for WhatsApp, reports suggest.

8654 Total views
210 Total shares
Listen to article
0:00
Analysis
Own this piece of history

On Dec. 20, Bloomberg reported that Facebook is making a stablecoin for WhatsApp users. The cryptocurrency will reportedly be used for money transfers made within the messaging app and will focus on the Indian market.

The move provides a curious juxtaposition for the social media giant, which banned cryptocurrency-related advertising across its network back in January and then partly reversed it in June.

Here’s how Facebook’s relationship with cryptocurrencies and blockchain has been developing in 2018 — overall, it has been a patchy road.

On Jan. 4, Mark Zuckerberg set out his person challenge for 2018: to fix Facebook. While this year brought even more problems for the social media giant — Zuckerberg’s sweaty testimony on data privacy before the United States Congress being a primary example — the Facebook CEO seemed optimistic about the company’s future at the start of 2018. Interestingly, he cited encryption and cryptocurrencies as potential ways to empower users in his Facebook post:

"There are important counter-trends to this – like encryption and cryptocurrency – that take power from centralized systems and put it back into people's hands. […] I'm interested to go deeper and study the positive and negative aspects of these technologies, and how best to use them in our services."

Despite Zuckerberg’s bullish statement, on Jan. 30, Facebook announced that it will prohibit ads that use “misleading or deceptive promotional practices,” referring specifically to initial coin offerings (ICOs) and cryptocurrencies. Rob Leathern, product management director at Facebook, explained the company’s decision in a blog post:

“We want people to continue to discover and learn about new products and services through Facebook ads without fear of scams or deception. That said, there are many companies who are advertising binary options, ICOs and cryptocurrencies that are not currently operating in good faith.”

The ban was “intentionally broad,” meaning that the social media company decided to ban all cryptocurrency ads on its platforms (namely Facebook, Instagram and Audience networks) first, and then find out how to pick out ones that are actually “deceptive.” However, Leathern also stated that the company intends to “revisit this policy and how [they] enforce it as [their] signals improve.”

Facebook’s move seemed to coincide with the U.S. Securities and Exchange Commission’s (SEC) public announcement regarding crypto-related investments and ICOs, which was published earlier in December 2017. In that statement, SEC Chairman Jay Clayton suggested that there is a growing trend for “fraud and manipulation” in the cryptocurrency and ICO markets due to their rising popularity.

Importantly, by rolling out its crypto ad ban, Facebook had set a precedent for other big tech companies, as Google and Twitter eventually followed suit. There was a shorter-term effect, too: The Facebook blanket ban was followed by a large Bitcoin (BTC) price drop, as it went from $11,200 to $8,800 over the few days after the decision was announced.

February: Facebook has no plans for crypto, says its head of Messaging

On Feb. 2, CNBC published an interview with David Marcus, Facebook’s head of Messenger and Coinbase board member, who has also admitted to having “a longtime” interest in cryptocurrencies.

“Payments using crypto right now is just very expensive, super slow, so the various communities running the different blockchains and the different assets need to fix all the issues, and then when we get there someday, maybe we’ll do something,”

During the interview, Marcus also defended Facebook’s decision to ban all crypto-related ads:

“We want to protect the community. That’s job number one. All the legitimate people in the crypto world that I spoke to at least thanked me for what we just did with that move. [...] The reality is the vast majority of these ads were a scam and we cannot allow scams to exist on our platform.”

However, he noted that the policy might be reviewed “once the industry self regulates a lot better and you have better more legit products that want to be advertised on the platform.” 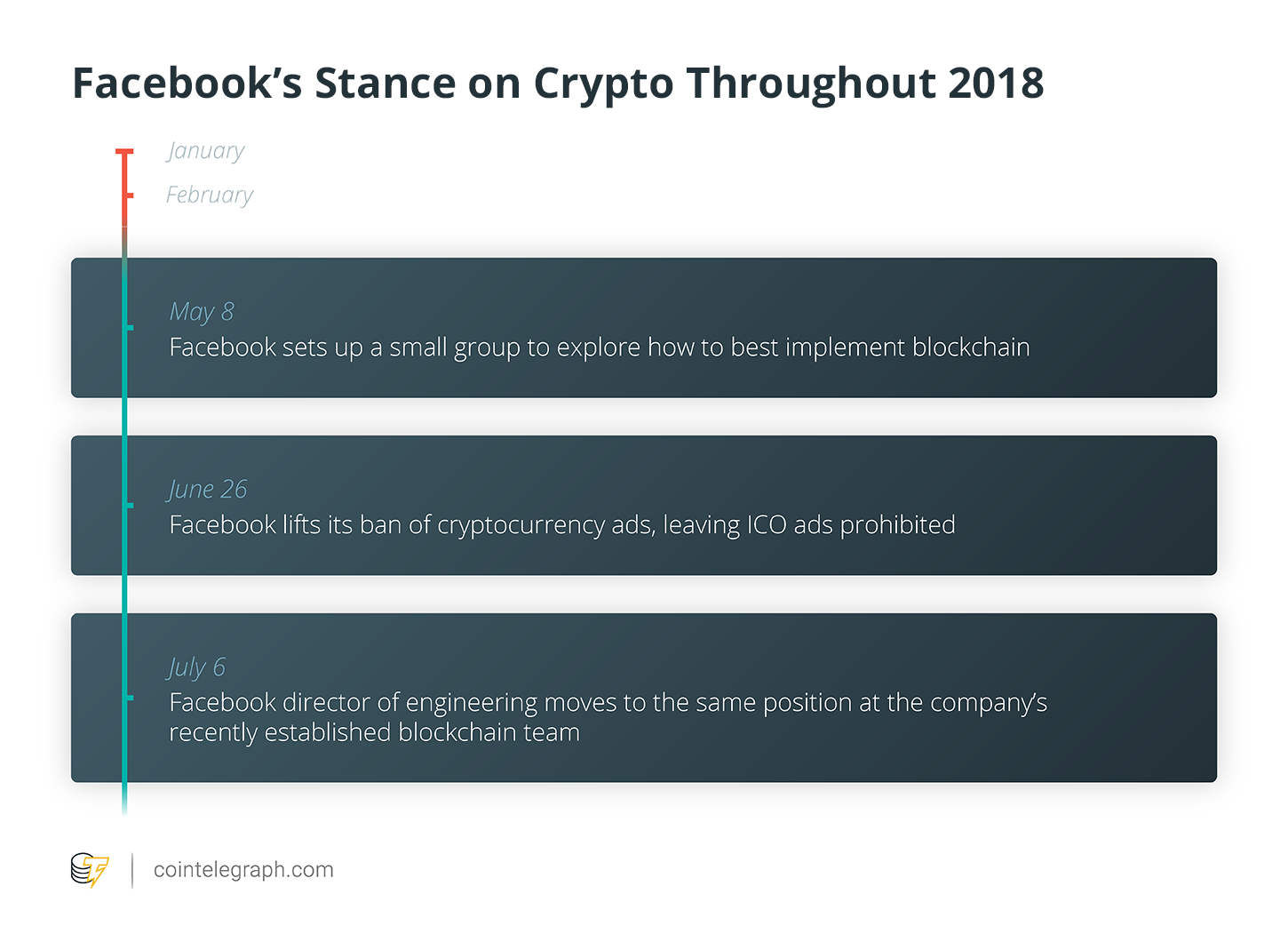 May: Facebook forms its Blockchain team; rumors about social media’s own crypto emerge

On May 8, Facebook unveiled its blockchain plans, as David Marcus announced that he will head up the technology-focused group assembled within the social networking service company.

“I'm setting up a small group to explore how to best leverage blockchain across Facebook, starting from scratch,” Marcus stated on his personal page.

A few days later, on May 11, news outlet Cheddar reported that the social media outlet is “very serious” about launching its own cryptocurrency. Cheddar’s anonymous sources “familiar with Facebook’s plans” reportedly said that Facebook is “specifically interested in creating its own digital token” for its 2 billion users.

The company did not respond to rumors about the cryptocurrency, limiting their statement to a brief comment on the newly established blockchain team:

"Like many other companies, Facebook is exploring ways to leverage the power of blockchain technology. This new small team is exploring many different applications. We don’t have anything further to share."

On June 26, Facebook made somewhat of a U-turn in regard to its views on crypto. The social media giant updated its policies to once again allow cryptocurrency ads on the platform — however, it has kept its ban on ICOs.

In the accompanying announcement, Facebook said it has been looking into the best way of “refining” its blanket ban on crypto-related ads “over the last few months,” in order to “allow some ads while also working to ensure that they’re safe.”

However, the updated policy required advertisers to submit an application so that Facebook can evaluate their qualification to run crypto-related ads. Specifically, applicants were advised to include “any licenses they have obtained, whether they are traded on a public stock exchange, and other relevant public background on their business.” Ultimately, Facebook stated that “not everyone who wants to advertise will be able to do so.”

July: Facebook’s director of engineering moves to its blockchain team

The software engineer updated his LinkedIn profile to reflect the newly acquired position, and the change has also been confirmed by Facebook.

Prior to this, Cheng was heading up the programming languages and runtimes division at Facebook for about three years. Before joining the social media company, Cheng was working on back-end engineering for the tech giant Apple for almost 10 years. 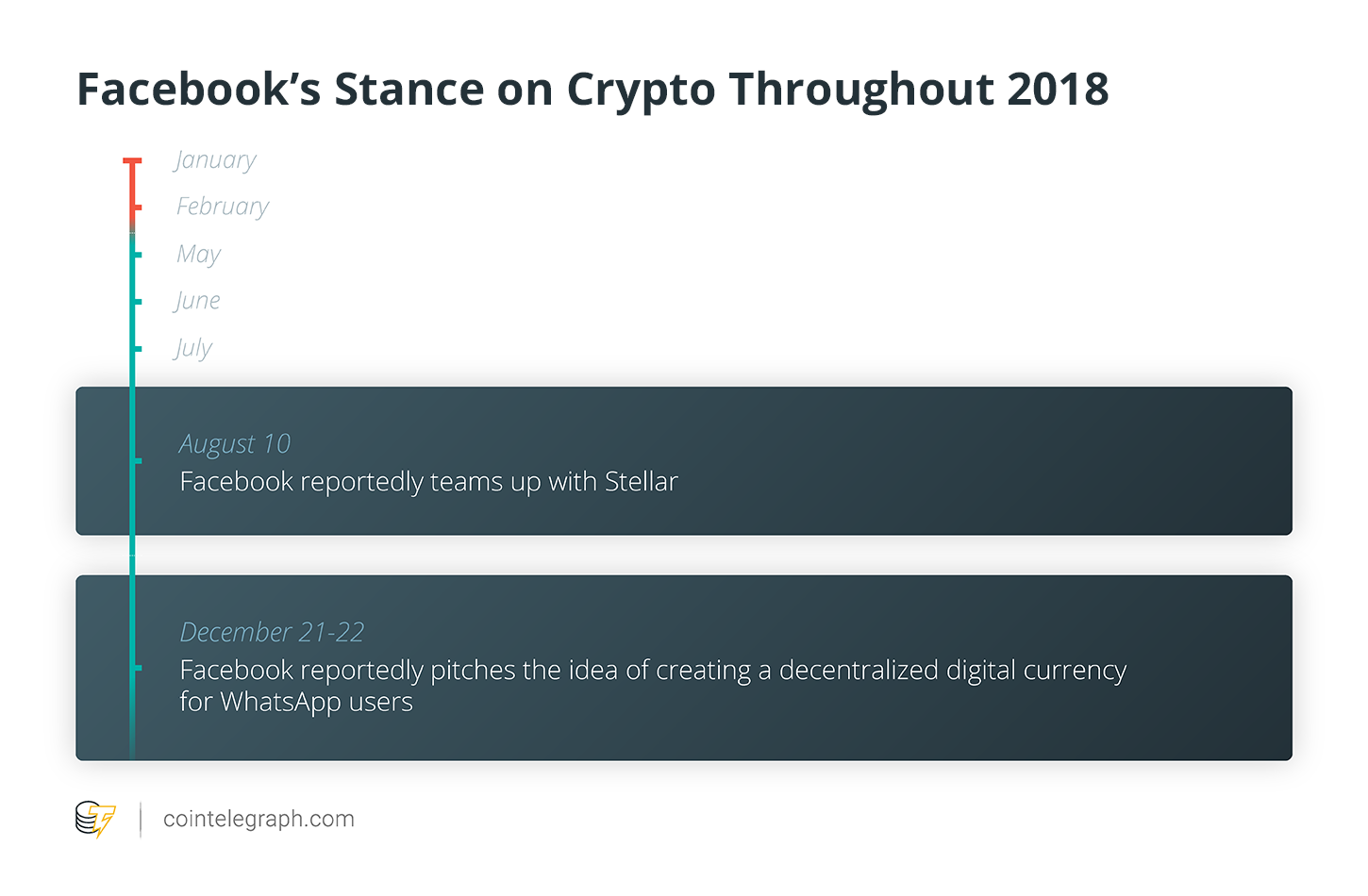 On Aug. 10, Marcus announced he was quitting his position on the board of Coinbase, which he obtained in December 2017:

“Because of the new group I'm setting up at Facebook around Blockchain, I've decided it was appropriate for me to resign from the Coinbase board. [...] I've been thoroughly impressed by the talent and execution the team has demonstrated during my tenure, and I wish the team all the success it deserves going forward.”

According to a Facebook spokesperson cited by CNBC, the move was “to avoid the appearance of conflict, rather than because of an actual conflict.”

Also on Aug. 10, Business Insider reported that Facebook and Stellar, a decentralized protocol for cross-border digital currency to fiat currency transfers, had been considering a potential partnership to build a Facebook variant of the Stellar blockchain. The move “could shed light on Facebook's ambitions to push into finance and take on big banks,” the report suggested.

However, Facebook promptly denied entering into talks with cryptocurrency firm Stellar. The social media giant’s spokesman reportedly told Cheddar that Facebook was “not engaged in any discussions with Stellar, and [was] not considering building on their technology” on the same day.

December: Facebook’s blockchain arm is on a hiring spree; rumors about a WhatsApp stablecoin surface

In December, the Facebook blockchain arm’s hiring spree was noticed by Cointelegraph, as the social media company listed at least five new blockchain-related positions on its careers page over three weeks, most of which have been closed as of press time.

The only remaining position mentioning blockchain is for a business development lead, for which potential applicants are required to have a “deep understanding of blockchain product and technology” in order to “inform and influence [Facebook’s] product roadmap and support and execute on product plans.”

As per Cheddar, by Dec. 13, Facebook’s blockchain department, once categorized by its head David Marcus as “small,” had nearly 40 employees. Facebook job listings state that its blockchain group’s “ultimate goal is to help billions of people with access to things they don't have now,” which “could be things like equitable financial services, new ways to save, or new ways to share information.”

Further, in December, rumors about the Facebook-run cryptocurrency reignited once again. First, Cheddar cited a source who said that “Facebook employees pitched the idea of creating a decentralized digital currency” at a private dinner the company hosted during an unspecified crypto conference.

Further, on Dec. 21, Bloomberg followed with a more detailed report, stating that the social media company is making a cryptocurrency for users of the messaging service WhatsApp, which Facebook obtained for $19 billion back in 2014.

The token will allegedly allow users to make money transfers within the messaging app and will focus on the remittances market in India, where WhatsApp is reported to have more than 200 million users. According to data from the World Bank, the country received nearly $69 billion in foreign remittances in 2017, which is 2.8 percent of India’s GDP.

More specifically, Bloomberg’s sources said that Facebook is developing a stablecoin. However, it is not likely to be released anytime soon, as the social media company is reportedly still figuring out which asset their stablecoin will be tied to.

As for public comments, Facebook has been forwarding the same statement since May, when first rumors regarding their own crypto emerged. It reads: "Like many other companies, Facebook is exploring ways to leverage the power of blockchain technology. This new small team is exploring many different applications. We don’t have anything further to share."